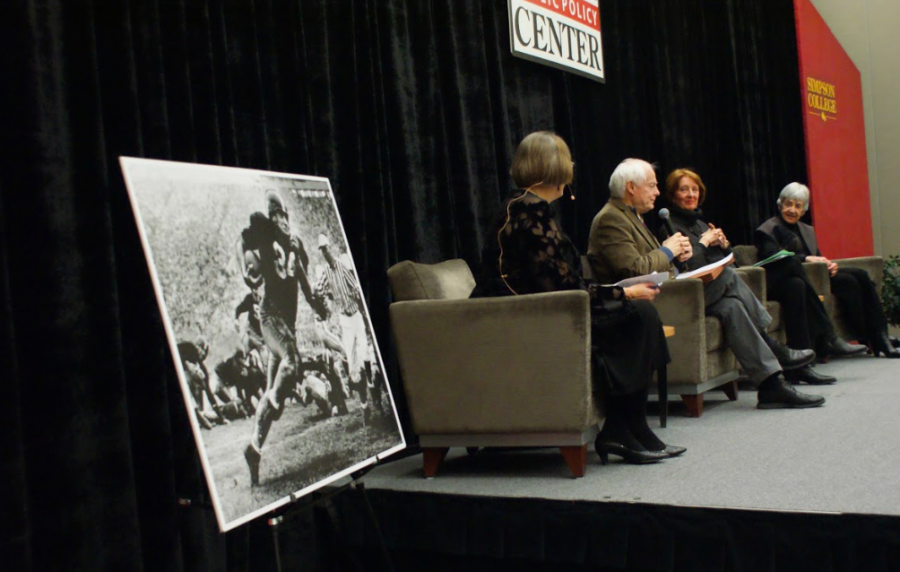 The late U.S. Sen. John C. Culver had been out of office for nearly 40 years when he died late last December—yet his impact on Iowa politics was made evident Wednesday night at Simpson College.

The John C. Culver Public Policy Center hosted a tribute program in Hubbell Hall featuring several former Iowa public servants and political staffers who worked alongside Culver during his time in the U.S. Senate from 1975 to 1980.

Jim LaRew, Culver’s former special assistant while he was a senator, introduced the panelists and spoke of his own experiences with Culver. For example, he recalled the first time he met Culver when he started to work on Culver’s senate campaign in mid-June of 1974.

LaRew said he was intimidated upon meeting Culver but was soon set at ease when Culver told him that he had lived in the same dorm room LaRew had lived in during his first year at Harvard.

“Somehow this opened John to me in a way I had not expected, an intimacy I did not deserve,” LaRew said.

He also reflected on Culver’s courage and willingness to face tough challenges, a trait the senator developed while playing football in college.

“I think in so many ways, it was not only how he acted, but how he inspired the rest of us to be courageous when maybe we weren’t feeling so much,” he said.

The other speakers reflected on their memories and interactions with the late senator.

Although he served on the other side of the aisle in Congress from Culver, Leach praised the senator’s deep intellect and adherence to his convictions in the face of pressure. He explained that even though Culver was on the House Un-American Activities Committee during his time as a representative, he did not agree with the work that committee did.

“He was on the committee because he objected to every decision they made,” Leach said. “I mean, that’s a really interesting phenomenon.”

Leach said that, unlike many other politicians at that time, Culver “had no meanness, he had no paranoia.”

Culver also served as an inspiration for Campbell, who worked for Culver during his time in the senate before eventually serving as Iowa’s attorney general from 1991 to 1995. She said he taught her that public service was honorable and something she herself should pursue.

One memory of Culver she has that is engraved in her mind is of when he met personally with the family members of Darwin Judge from Marshalltown. Judge had been one of the final two American soldiers killed in the Vietnam War.

When Culver learned the North Vietnamese wouldn’t return the body of Judge and the other soldier, Campbell said he had told her, “We are getting those bodies back, come hell or high water!”

Campbell had later told Culver that Judge’s family was going to visit Washington D.C., and he responded by saying he would personally give them a tour.

“John spent the day taking them around,” Campbell said.

In addition to the panel of speakers, several Simpson alumni who were members of the college’s Culver Center spoke of the impact Culver’s legacy had on them.

Alumna Molly Monk, who graduated in 2016, recalled a conversation she had with the late senator where she asked him why he did what he did, in reference to his public service.

“He just looked at me and said, ‘Because we need more honest people in politics,’” Monk said. ‘“We need people like you in there.’”

Monk said that mindset Culver shared with her changed her life and inspired her to become deeply involved in politics on and off campus. For instance, she recalled how she and fellow alumna Alanna Wendt started a series of “Pizza and Policy” discussions on campus where students can learn more about a particular policy issue while enjoying pizza.

Monk also mentioned how she has continued to stay engaged in politics after graduation, referencing her work last summer on Rep. Abby Finkenauer’s campaign in Iowa’s 1st Congressional District.

For Nick Laning, a 2017 graduate, the biggest lesson he learned from Culver’s example of public service is the importance of bipartisanship. Laning said Culver’s friendship with Republican Sen. Alan Simpson of Wyoming, who delivered the annual Culver Lecture on campus in 2014,  allowed him to embrace a bipartisanship mindset as an aspiring public servant.

“Never did I think, before coming to college, that I would help elect a Democrat, but here we are,” he said, prompting laughter from the audience.

Several of the speakers also addressed the students in the crowd, many of whom were current Culver Fellows who aspire to public office one day.

Riggs, who was Culver’s chief legislative assistant, echoed the advice many of her peers also offered to those students: “Look to people like John. One of the most important things is to know why you’re doing it and what you want to do.”