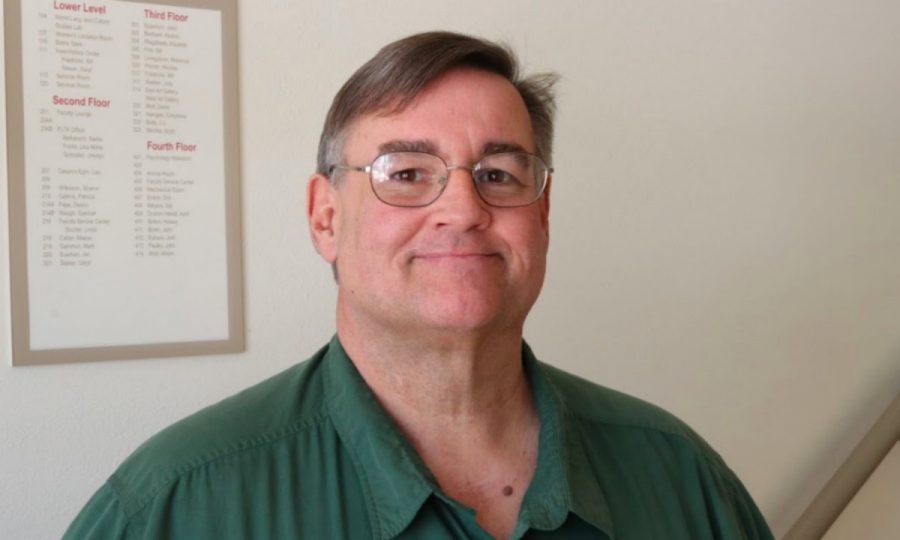 Mark Bates has been a large influence on Simpson College’s Spanish department for the past 21 years.  The professor of Spanish has lead many trips abroad, created new class programs and curriculum and even published a book about his travels.

Bates started his teaching career at Grinnell College where he spent four years. He then taught at Xavier University in Cincinnati, Ohio, for five years and the University of Iowa for one year before finally settling in at Simpson. He said he loved the idea of a liberal arts college, even though he has had experience at several types of institutions.

Bates currently teaches Spanish at all levels at Simpson, as well as a Portuguese class. Simpson is the only liberal arts college in Iowa that has a Portuguese program.

Bates has been influential in many of the changes to the Spanish and foreign language departments during his time here and would consider much of that his biggest accomplishments as a professor.

He said when Tracy Dinesen, a Spanish professor who came to Simpson after him, they changed the program to focus more on culture. They also managed to bring more students to the major.

“When I started there were only five major students and we built that to fifty,” Bates said. “Also, our program is cutting edge and has been nationally recognized.”

He has spent a lot of time abroad with students as well. Bates developed the Nicaragua semester abroad program and has done that trip four times. He also leads semester programs to Argentina and Chile, as well as many May Terms to Mexico.

Bates, who is also the author of the book, “With Arms Wide Open: Stories of Nicaragua,” shared an anecdote from his book.

“I had a former student who tricked me into attending a Mambo music festival to see a guitar player she had a crush on. I do not like Mambo Music,” Bates said. “I suffered through the festival for four long hours and eventually caused the meeting between them by having a drink sent over to his table.”

“They ended up dating for a while,” he added.

Through all of his travels, Bates has gained a wealth of knowledge about other cultures and how they interact with our own. He believes that Portuguese will be the trade language of the future as Brazil is already one of the United States’ largest trade partners.

“My dream is to see a free-trade market like the EU (European Union) in America,” Bates said. “Also to be able for everywhere in the Americas to use a single-currency system. I want us to stop worrying about problems in other places and start focusing on our own problems. I want us to stop thinking of our country as America and start think of our geographic locations as part of the Americas.”

After he retires, Bates plans to move to Mexico with his husband in December. He looks forward to relaxing and continuing to write.

“I wouldn’t trade my years at Simpson for anything,” he said. “Seeing my students’ success and using the skills they have learned in their careers is my best satisfaction.”