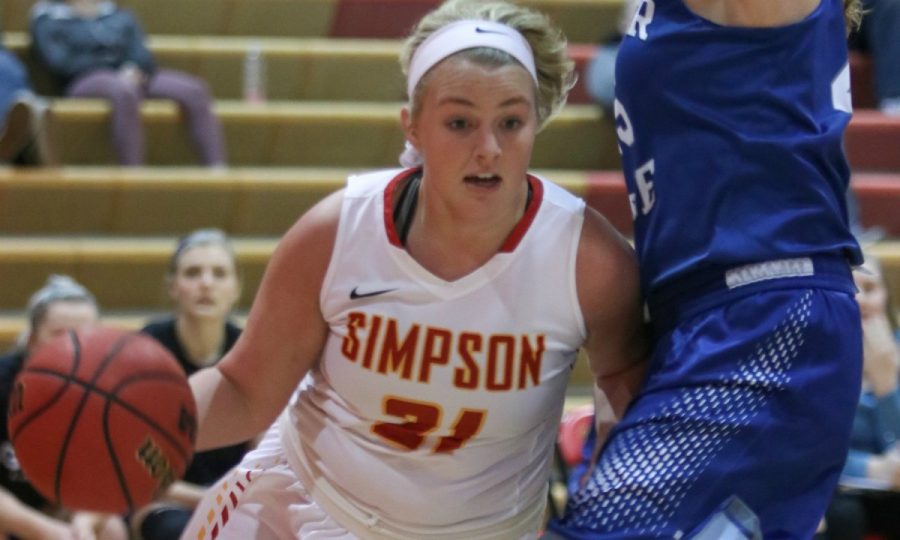 As water bottles were cradled and pep talks endured, the crowd of over 350 spectators in Cowles Fieldhouse quickly grew silent during the last five minutes of the Simpson College women’s basketball game against Wartburg on Jan. 31.

A stifling late run from the Knights sealed the 88-73 loss as the Storm watched their six-game winning streak disappear, despite a solid night of three-point shooting on their part.

Simpson (17-5, 9-4 A-R-C) was down for nearly 34 minutes against the top-seeded team in the American Rivers Conference. Wartburg (18-3, 11-1 A-R-C) burst out on a 10-0 run the first three minutes of the game amid multiple errant throws and missed shots on both sides of the court.

Junior forward Jenna Taylor, the Storm’s leading scorer throughout the season, was taken out of the game after picking up two quick fouls in the first four minutes.

“I couldn’t affect the game on the court, so I was just getting my teammates fired up and was trying to stay focused and see things from the bench,” Taylor said.

Junior forward Cassie Chubb and freshman forward Alaira Tyus filled in Taylor’s absence under the block, with Tyus converting the first basket inside the arc for Simpson. The two combined for nine points, four rebounds, and three assists through 24 minutes of play.

“It changed our substitution pattern and what we were able to do on the floor, but it showed we can play well without Jenna,” Simpson Head Coach Brian Niemuth said.

After falling behind 10 points with three minutes left in the third quarter, the Storm eventually awoke themselves behind the three-point line, knocking down a string of threes. The team shot 44.8 percent from three-point range, one of their best performances from behind the arc this season.

Sophomore forward Cameron Kincaid drove in for a layup to tie the game at 60-60 with 8:15 left to play. Kincaid was the leading scorer for the Storm, churning out 15 points with nine of them coming off from 3-pointers.

“Coach has always encouraged me to take more threes during shooting workouts,” Kincaid said. “I knew going into the game they weren’t going to play me on the three-point line and I took advantage of that.”

The Storm would finish the quarter on a 9-3 run, with freshman guard Kia Rasmussen hitting a jumper to beat the buzzer.

Junior guard Janey Botkins brought the stands to their feet soon after in the fourth quarter with a clutch 3-pointer to make it 63-62, giving Simpson their first lead of the game.

“I wasn’t surprised at all they made a run at us and took the lead. In that timeout, we tried to regroup and really lock down on defense,” Wartburg Head Coach Bob Amsberry said.

That’s exactly what they did.

Wartburg headed back onto the floor refueled and recharged. The Knights would only allow the Storm to make one basket in the final five minutes.

The game ended on a 16-2 Wartburg run in which the Knights never stopped shooting and never stopped drawing fouls. Hopes of Simpson extending their win streak to seven games swiftly ended.

“We had the game in our hands and let it slip away,” Niemuth said. “This is a young team though, so I think we need to go through these battles to get to where we want to be.”

The next game for women’s basketball will be Senior Day against Central College on Feb. 13.