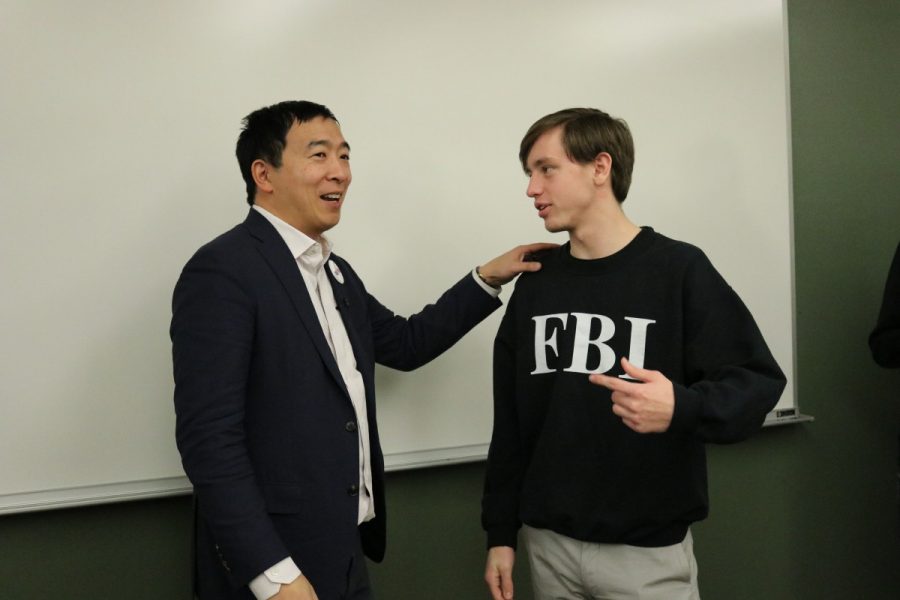 The student group Simpson Democrats hosted Andrew Yang, a New York entrepreneur and founder of the Venture for America nonprofit organization, who spoke to about 25 Simpson students and community members about his vision for the country.

That vision includes implementing a universal basic income (UBI) of $1,000 a month for all U.S. citizens between the ages of 18 and 64. Yang said he would call the income a Freedom Dividend, “because people like it much more with the word freedom in it.”

He said the idea is not new, either. American historical figures such as Thomas Paine and Martin Luther King Jr. also supported a form of a UBI. He also said a bill to implement a UBI passed the U.S. House of Representatives in 1971 under President Nixon.

One state has actually passed a UBI in 1982, he said, referring to the Alaska Permanent Fund that pays a yearly dividend to residents and is funded by the state’s oil revenues.

Yang said he would fund his UBI by placing a value-added tax on products made by companies that use automation, which is another central part of his campaign.

“What Alaska did with oil, we can do with technology,” Yang said.

He described the transfer of money created from the value-added tax as giving taxpayers “a sliver of the tech companies’ earnings.”

The reason Yang said he believes Donald Trump won the 2016 election is because of the spread of automation replacing workers in states such as Michigan, Ohio, Pennsylvania, Wisconsin and Iowa.

“He won all of those states, he won Iowa by almost 10 points,” Yang said. “And my friends who work in technology at Silicon Valley know that what we did to the manufacturing jobs, we’re about to do to the retail jobs, the call center jobs, the fast food jobs, the truck driving jobs, and on and on through the economy.”

He used the analogy of innings to describe how far along automation has come: the first inning was when financial services became deregulated; the second was the decline in manufacturing jobs; and the third inning is the phasing out of brick and mortar shops, which is taking place currently due to online retailers.

Yang predicted the fourth phase will be self-driving cars and trucks, a reality he said is already in the works.

“They just had the announcement today that Amazon is already testing robot trucks in the Midwest,” he said, adding, “So in five to 10 years, you’re going to see those trucking jobs start to disappear.”

By giving Americans another $1,000 a month, Yang said he hopes to help improve the lives of ordinary people impacted by the rise of automation and also to empower marginalized groups who commonly experience economic disadvantages.

The Simpson Democrats’ president, sophomore Geoff Van Deusen, said Yang’s campaign had initially reached out to them about setting up a visit to campus.

“So that signaled the start of campaign season for Simpson College,” Van Deusen said.

He said he thought Yang came across as genuine and honest, even when answering the audience’s questions about his policy positions.

“And we asked some hard questions,” he added.

One such question an audience member asked Yang was how homeless people would receive a UBI if they don’t have a permanent mailing address. He responded by explaining the UBI would be an opt-in program and would not be forced on all adults.

Yang was also asked if he would call himself a socialist.

“I really would not,” Yang responded, explaining that he thinks the dichotomy between capitalist and socialism is out of date. Instead, he said elements of both capitalism and socialism are needed in different aspects of society.

Sophomore Jordan Baldwin said he came to the event because Yang was the first Democratic candidate to visit as part of the 2020 election cycle. He had also heard of Yang’s proposal of implementing a UBI and wanted to learn more about how it would work.

“I really wanted to see some of his other stances and just to get face-to-face interaction with a presidential candidate,” Baldwin said.

He said the issues he cares most about going into the 2020 election cycle are student loan debt and environmental issues, which are also topics Yang addressed at the event.

“The candidate that can also address (climate change) the best way and that will definitely bring us back into the Paris Accord … would also get my vote as well,” Baldwin said.