Meet some of Simpson’s twins 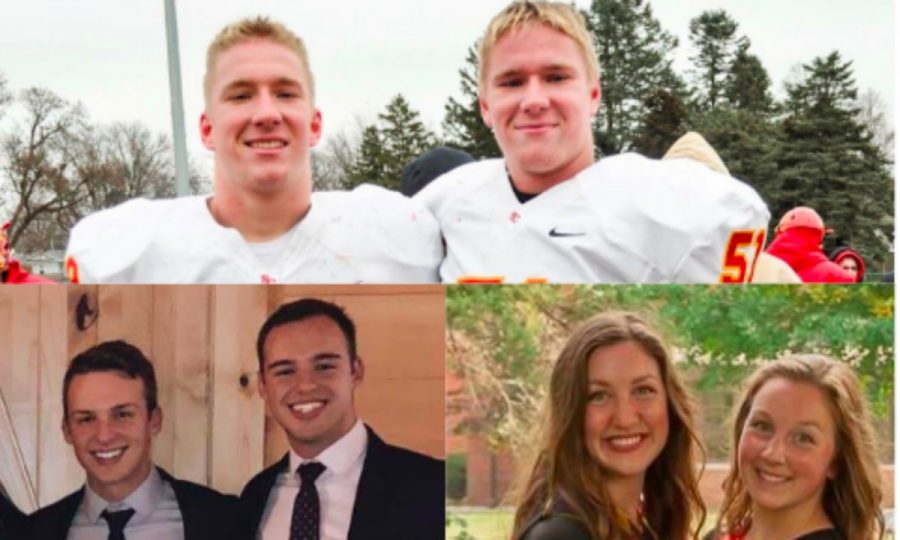 by Ty Duve , Director of Marketing

Growing up with a twin usually consists of spending all of your time together, getting mistaken for each other and receiving the same Christmas presents.  But what happens when you leave for college?

“We definitely wanted to go to college together if possible,” Daniel Goldsmith said. “We have always been best friends.”

David and Daniel Goldsmith are juniors at Simpson College and have been inseparable since birth.

They are both science majors, members of Sigma Alpha Epsilon fraternity and have been roommates their entire life.  “We are better together,” David said. “Wombmates to roommates.”

While growing up, it has always been normal for them to have their best friend at their side all the time. They said the only negative side of being on campus together is being compared.

“We get compared a lot as twins,” Daniel said. “But we are used to it.”

The transition after college will be bittersweet as they move away from each other. They both plan to pursue medical positions but never want to lose touch.

“We always have to spend our birthday together,” Daniel said. “That will always be a priority.”

Morgan and Taylor Frideres are also twins at Simpson and have shared a room since they were born. The only thing they don’t share is clothes.

“We added on to our house and had the option to have our own rooms but still wanted to share a room,” Morgan said.

At first, they didn’t know if they wanted to go to the same college but eventually decided Simpson was the perfect fit because they could cheer in addition to managing classes.

“It wasn’t required that we go to the same school,” Morgan explained. “But we both really liked Simpson.”

They have an older sister who also went to Simpson and she helped them decide. “At one point, there was three of us here,” Morgan said.

Before they moved in, they got comments from other people about how they would struggle to make friends if they roomed together, but they have made many close friends during their time at Simpson.

“We both had the intention to meet new people, and we didn’t have any crazy roommate stories,” Taylor said. “College is scary enough as it is, I was glad that I knew my roommate.”

They are both excited to take on adult life after graduating in May 2019 but will have to adjust to rooming with other people.

Two other Simpson twin siblings are sophomores Jack and Ian Bootsmiller, who have been causing mischief together since preschool.

“We hated preschool,” Ian said. “So, we made an escape plan to make it to the top floor of the hotel across the street.”

Neither of them made it all the way there, but running away seemed to be more fun than nap time.

Instead of coming up with creative escape plans, the Bootsmiller twins spend their time playing for Simpson’s football team and getting mistaken for each other in class.

“Most people on campus don’t even know that I have a twin,” Ian said. “A lot of people see Jack and say hi thinking it’s me.”

Their favorite part about being at Simpson together is having a car on campus. “If we went to different schools, it would be hard to share the car,” Jack said.

They also appreciate having someone on campus they can go to about personal matters.

“He knows everything about me,” Ian said.