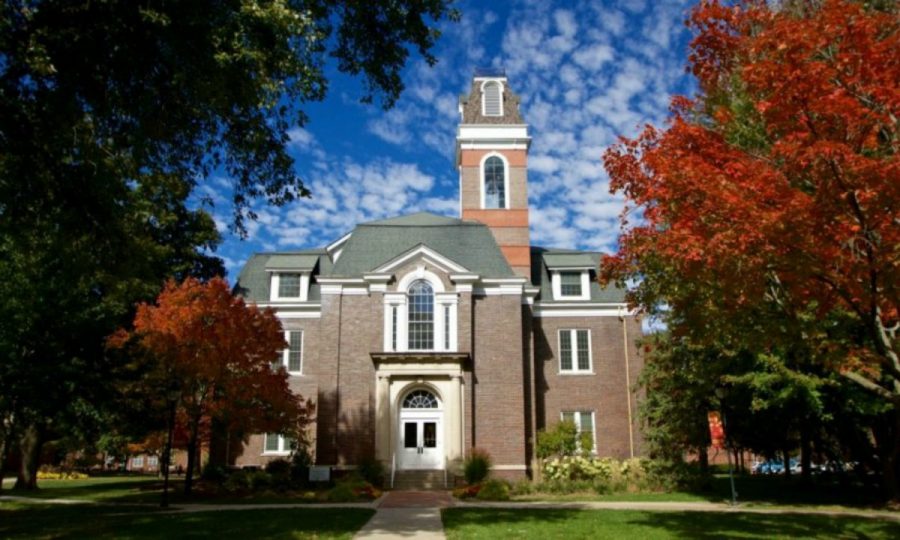 by Randy Paulson and Zoe Seiler

SIMPSON—Eliminations of tenured faculty at Simpson College in the spring violated standards set forth by the American Association of University Professors (AAUP), according to emails between the organization and the college obtained by The Simpsonian.

The AAUP is a nonprofit organization that develops standards and procedures to “maintain quality in education and academic freedom in this country’s colleges and universities,” according to the AAUP website.

Greg Scholtz, director of the AAUP’s Department of Academic Freedom, Tenure, and Governance, confirmed in an email to The Simpsonian the organization had contacted Simmons in the spring regarding concerns over the termination of two tenured faculty members. He also said the AAUP is “apprised of current developments at the college.”

The AAUP argued that the college terminated the professors last spring for reasons that don’t comply with AAUP standards, according to a March 23 email from the AAUP obtained by The Simpsonian.

“As the stated basis for terminating the tenured appointment of Professor Roberts is neither adequate cause, nor financial exigency, nor program discontinuance—the only legitimate bases for such an action under AAUP-supported principles and standards—the action against her appears to contravene those principles and standards,” according to a March 23 email from the AAUP obtained by The Simpsonian.

However, the March 23 email said Roberts was not told why her position was selected for elimination and that three other tenured faculty members had received similar notices about their positions.

In two of the cases, including that of Roberts, non-tenured faculty would retain their positions in the affected departments. It also said “no faculty governance body participated in the decision to terminate these appointments” and “no academic department or program is to be discontinued.”

The email added that the AAUP urged the college “to rescind the notices of termination issued to Professor Roberts and other similarly situated faculty members.”

The email was one of several the organization exchanged with the college in the spring regarding the elimination of Roberts and Green.

In a March 26 email, the AAUP said Green’s letter of termination was “identical in virtually all respects to that received by Professor Roberts” and it should likewise be rescinded.

Roberts confirmed in an email to The Simpsonian that the college has not maintained her position.

Green confirmed to The Simpsonian that, despite the actions taken by the administration last spring, he will remain at Simpson as a professor of management for the 2019-20 year and beyond.

JJ Butts, assistant professor of English at Simpson and chairman of the college’s newly formed chapter of the AAUP, said in an email to The Simpsonian that the AAUP forbids colleges from “selectively eliminating tenured faculty within existing programs (…) since an administration could simply pursue reduction of a program’s resources in order to get rid of a faculty member whose research was politically controversial or who had been critical of the administration.”

“This would jeopardize the principles of academic freedom and shared governance,” Butts added.

When a college terminates a tenured faculty member for adequate cause, the AAUP requires the college to hold a “pre-termination hearing of record before an elected faculty body in which the burden of demonstrating adequacy of cause rests with the administration,” according to the March 23 email from the AAUP.

The AAUP defines financial retrenchment, or financial exigency, as “a severe financial crisis that fundamentally compromises the academic integrity of the institution as a whole and that cannot be alleviated by less drastic means,” according to its 2018 Recommended Institutional Regulations on Academic Freedom and Tenure.

The email said parts of the handbook are inconsistent with AAUP standards and that “it permits tenured appointments to be terminated when programs and departments are merely reduced for non-exigent financial reasons.”

The AAUP also urged Simpson to revise the college’s faculty handbook so it aligns with the AAUP’s standards regarding tenured faculty eliminations.

“In the absence of such revisions, academic freedom and tenure at Simpson College are not secure,” the email concluded.

Butts said that during a Dec. 10 special faculty meeting, Simpson’s faculty approved a proposal that revises the faculty handbook so it more directly aligns with the AAUP’s guidelines on tenure.

“Though the existing version of the handbook also clearly draws on those guidelines, it has been read in ways that are out of step with them during the prioritization and reduction process,” he said.

However, the proposed eliminations of tenured professors announced in an additional round of faculty cuts in October could heighten tensions between the college and the AAUP.

This round of cuts affects tenured faculty members whose academic programs would be discontinued, such as Justin Nostrala and Gabrielle Rose-Curti in the Art Department and Sharon Wilkinson and Patricia Calkins in the French and German programs, respectively.

Eliminating these tenured faculty would appear to comply with the AAUP’s standard of program discontinuance.

However, the cuts would also affect at least one tenured faculty member whose department would remain: Judy Walden in the History Department, according to previous reporting by The Simpsonian. The elimination of her position, similar to that of Roberts and Green, would not comply with the AAUP’s standards.

Professor of French Sharon Wilkinson said in an email to The Simpsonian that she believes ignoring the standards set by the AAUP regarding tenure would be shortsighted on the part of the college administration.

“It will very likely be more difficult to convince current faculty members to stay at Simpson and future candidates for faculty positions to choose Simpson over other offers if it is clear that the administration openly and knowingly flouts nationally recognized standards,” she said.

In addition to revising the faculty handbook during the Dec. 10 meeting, faculty members also voted in favor of keeping three of the four academic programs which had been targeted for elimination in October. The college’s board of trustees will make the final decision regarding the fate of the programs.

Simpson College President Jay Simmons did not respond to a request for comment regarding the college’s decision to eliminate tenured faculty.

Wilkinson said cutting tenured professors is a desperation move, and by doing so, Simpson could find itself in bad company with other institutions “that we will not be proud to have as peers.”

She also said “there are other alternatives to cutting tenured faculty,” such as expanding programs and cutting other budget-line items, as seen at Drew University in New Jersey.

At Drew, the administration cut “nonacademic expenses and fringe benefits for faculty and staff” and refused to cut academic programs, according to an Inside Higher Ed article.

Wilkinson said she was puzzled why Simpson would choose to make a “queen sacrifice” by eliminating tenured faculty positions given the financial situation is not desperate enough to warrant such a move if other options were available.

“Chess players who sacrifice their queen before they need to certainly make it easier for their opponents to defeat them,” she said. “The administration is hoping to regain a position of strength by closing programs and laying off tenured faculty. Time will tell whether this risky move will pay off in the long run.”

This story has been updated since it was originally published