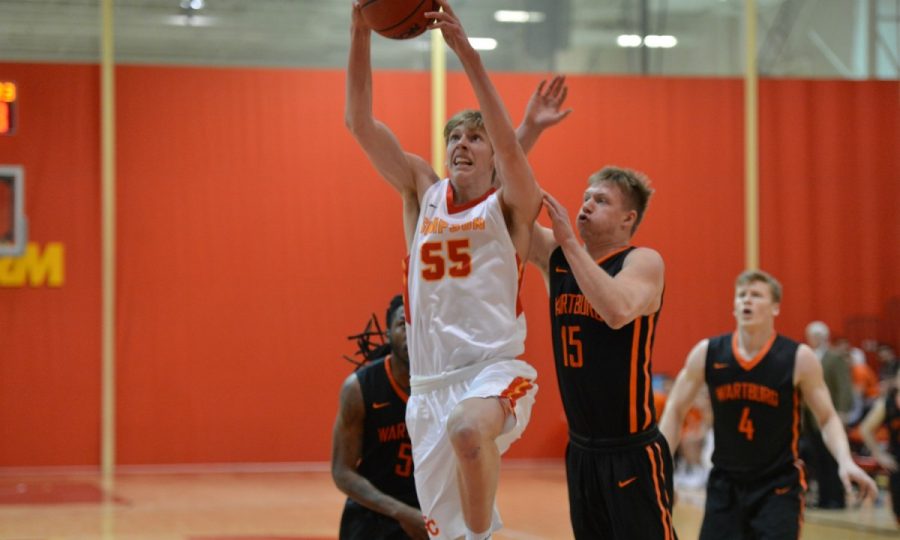 Standing at 6 feet 9 inches tall, junior forward Adam Reiter is a force to be reckoned with down low for the Simpson men’s basketball team.

The first-year starter has helped the Storm claim a 4-2 record, averaging 13.2 points, 6.4 rebounds and 1.2 blocks. But his path was not the path of your average high school basketball star.

“The only reason why Simpson started recruiting me was because they were there to watch Conor (Riordan),” Reiter said. “I was probably like our 11th or 12th guy.”

Still growing into his body (he grew eight inches before his senior season), Reiter found himself sitting on a deep bench in a guard-heavy, talented offense at Ankeny. His senior year, he averaged a mere three points per game—a stat that doesn’t jump out to college coaches.

“We recruited Conor Riordan pretty hard, so when I was going to games, I was watching this young-looking, tall guy go through warmups,” Bjorkgren said. “After Conor committed, I said to him that I’d like to know more about Adam … Conor was all in on recruiting him.”

In his sophomore season, Riordan was a breakout star a year ago, averaging 19.4 points and earning first team all-conference honors. But once again, the path wasn’t the same for his high school teammate.

At the start of the 2017-18 season, Reiter was sitting as the third big-man on the squad behind senior all-conference forward Sam Amsbaugh and fellow sophomore Kenton Thoms. When Thoms went down with an injury early in the year, Reiter was forced to play meaningful minutes when Amsbaugh needed a break or was in foul trouble.

“That was the best learning experience that I could get,” Reiter said. “I was definitely really nervous. My heart was beating, like, a thousand miles an hour. Those first few games I was sweating bullets.”

After settling in and settling down, Reiter showed he was capable of performing at a high level when the Storm needed him.

“I was definitely more relaxed and confident as the season progressed,” Reiter said. “If you look at the eye-test and also stats, I think the more big games I played in, the better I was doing.”

Now, a season later, Reiter is the man responsible for replacing Amsbaugh in the starting lineup.

“The thing that Adam is handling better and still needs to get better at is, now all of a sudden, he’s a 25-minute guy,” Bjorkgren said. “It’s a different role for him. He’s a starter, and he’s earned that spot and he needs to continue to accept his role and expand it.”

Reiter attributes much of his improvement to assistant coach Brandon Stromer. Stromer works with the post-players in practice and has worked hard to develop Reiter’s game.

Reiter was given the opportunity to show off his much-improved game this summer at the YMCA Cap City League in Des Moines.

In the league, the best college basketball players in the state of Iowa are drafted to teams, and the public can watch for free. A late addition, he was able to gain more confidence by playing against, and beating, Division I players.

“We both got to play in the Cap City League,” Riordan said. “It was totally evident, like, he was going up against Michael Jacobson (ISU) and a bunch of these D-I guys, and he was holding his own. He was playing really well, and that can only boost your confidence.”

A true underdog, Reiter never stopped believing in himself, no matter how tough the times seemed.

“I knew my talents, and I knew I could always bring a lot to the floor,” Reiter said. “I never stopped believing in myself, and I think if you have a passion and you’re always confident in yourself, it’s going to pay you back for sure. Once you work hard, the process will love you back eventually.”