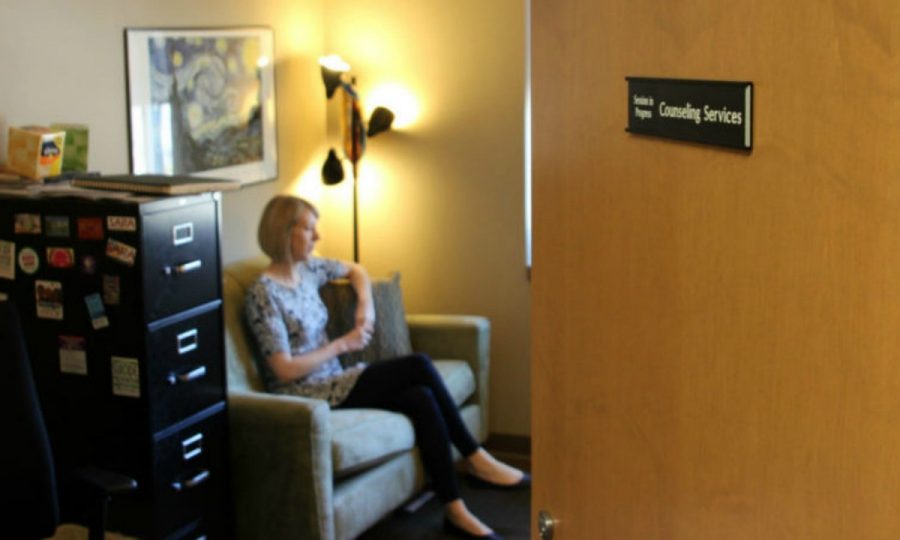 With an increasing number of students seeking support from counseling services, Active Minds and the Student Government Association are aiming to change the conversation about mental health.

Last academic year, 20 percent of the student body—about 250 students—had a counseling session, said Ellie Olson, associate dean for counseling, health and leadership. That was a 3 percent increase from the previous year.

Five students were also referred to a hospital for mental health concerns, a number that was already surpassed this semester, Olson said.

These rising concerns started an initiative within Active Minds and SGA. They recognized the spread and importance of mental health awareness after the death by apparent suicide of freshman Nathan Schroeder in September, said freshman class president Spencer Davis.

Active Minds, a national organization with over 400 chapters on college campuses, is working with the internal affairs committee in SGA to bring speakers and fundraisers to campus. They’re in the beginning stages of planning.

Davis’s goal is to teach people that everyone is vulnerable to mental health issues, no matter the severity.

The two organizations hope to bring a speaker from the drag community to campus next semester to share mental health issues in the LGBTQ community, according to Tatum Clayburn, vice president of Active Minds.

The group also hopes to host a fundraiser about mental health, specific to college-aged students and men. This event will be in Schroeder’s honor to raise money for a foundation that has not yet been decided.

These efforts replace the push toward a 24-hour mental health hotline that was discussed last year. According to Olson, it was too expensive for what the college needs. She said these hotlines are more common among larger universities that have more people and funding.

Olson suggested there are better uses of the college’s funds toward tools like education and training, which is what Active Minds and SGA hope to achieve.

Counseling services relies on student organizations such as Active Minds and SGA to host programs, Olson said. With their lack of funding, staff and student participation, it’s easiest for the counseling staff to depend on student energy.

“I would love to push some of those trainings, but in all honesty, we can’t even get the number of students in who want to get in for counseling,” Olson said. “And so the resources or energy or staffing that we have to put toward coordinating something like that is also kind of challenging.”

Olson said it’s hard for the staff to keep up with the increasing mental health demand. Counseling services has two full-time staff members, one part-time and a periodic intern who see students.

Around midterms, there was a wait of about two weeks, so outside help was hired to keep up with the demand.

Since Olson started at Simpson 12 years ago, the number of students making appointments consistently increased. At that time, about 10 percent of students utilized counseling services. Now that number is about 20 percent.

“I like to see it; it’s mixed,” Olson said when describing the increase. “To me, it means that more people are willing to ask for help—that help-seeking is becoming more normalized.”

“At some points, it’s hard though, too, because we are not necessarily seeing an increase in the staff every year that corresponds with the increase in demand.”

Not only has Olson seen an increase in mental health concerns, she’s also seen a change in commonality.

When she started, depression was the most common reason why students sought help. Now, she said it’s stress and anxiety.

While Olson thinks culture does a better job of recognizing mental health issues, she also thinks it makes these difficulties more common, especially among college students.

Students can make a confidential appointment by calling 515-961-1332 or emailing [email protected].

The first session lasts about 30 minutes and consists of counselors learning the student’s history and the reason why the student made an appointment.

Subsequent sessions last about 45 minutes and are free-flowing with set goals. Olson said it’s a collaborative environment to build skills, offer tools and explore possible reasons for their feelings. Students are in charge of what’s talked about in the sessions and what they want to get out of it.

“Struggle is our normal,” Olson said. “We are people who have heard a lot of stuff at this point. You may never be more normal than you are in our office.”

Counseling services’ next event, which will focus on stress relief, will take place from 11:30 a.m. to 4 p.m. on Dec. 5 in the Principal Black Box Theater. There, students can relieve the stress of finals through activities such as coloring and decorating.