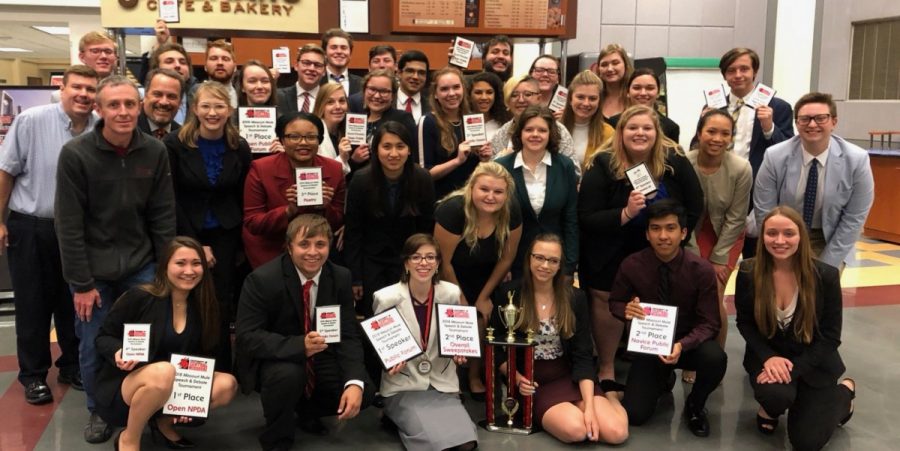 Simpson College’s speech and debate team has continued what has been a record-smashing season throughout the past few weeks with no sign of slowing down.

The team won debate sweepstakes at the Missouri Mule hosted by the University of Central Missouri on Oct. 19 and 20. Simpson finished with 174 debate team points, beating out 18 other colleges.

“Our Public Forum team did the best,” said Spencer Waugh, coach of the debate team. “We had all five of our varsity teams make it to out-rounds, which is unheard of. That’s the best our Public Forum squad has ever performed.”

The team also saw success in the Parliamentary Debate category.

More recently, the team competed at the Vocal Viking tournament at Bethany Lutheran College on Oct. 26 and 27, where they also had a strong showing.

“I think the team did really well as a whole,” said Kimberly Roberts, a sophomore who participates in Parliamentary Debate and Impromptu Speaking. “There were only 11 students who went to Bethany for this tournament, and I feel even with small numbers, we still left a mark.”

The debate team has been working hard to improve and prepare for the Pi Kappa Delta National Speech and Debate Tournament, which will take place in the spring.

“There are always things that we can improve on and perfect,” said Erin Magoffie, a junior who participates in Parliamentary Debate. “I have a lot of things I can work on in terms of technicality.”

The national tournament, which Simpson’s team won last year, will be held in New York City. The team is hoping to repeat their success.

“I am so pumped for nationals this year,” Roberts said. “We have a strong team this year that can do really well at nationals. Nationals just has a different energy feeling than any other tournament, and I can’t wait to be there again and compete.”