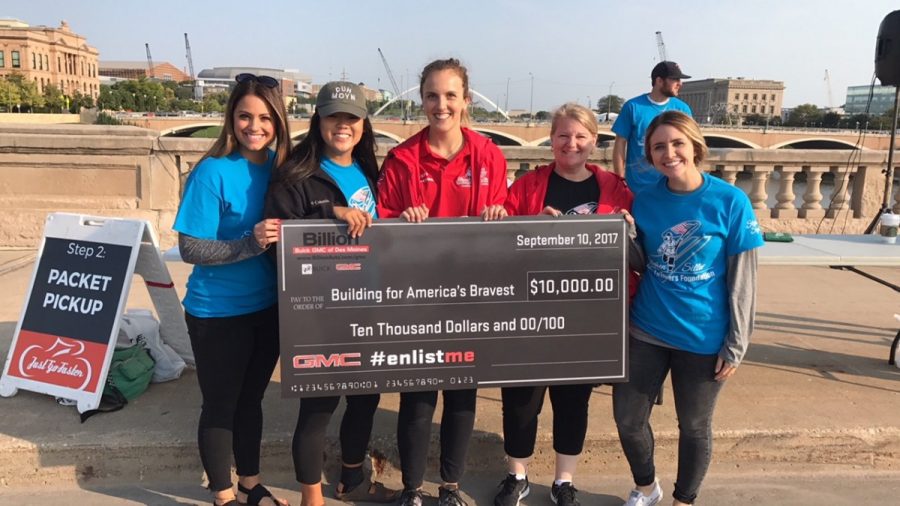 Winter-like temperatures have arrived in Iowa, but that won’t stop a recent Simpson College alumna from hosting her second annual Veterans Day 5K on Sunday in Ankeny.

Amy Ryan graduated from Simpson in 2015 and has been busy the past two years bringing the Stephen Siller Tunnel to Towers Foundation’s 5K Run and Walk to central Iowa.

“And I have just always taken an interest in remembering 9/11 for the acts of heroism from that day, and the message of the foundation really stood out to me,” she added.

The New York-based nonprofit honors the sacrifice of Stephen Siller, a firefighter who died on Sept. 11, 2001 while trying to rescue others. Ryan said the foundation raises money for families of fallen first responders, critically wounded veterans and Gold Star widows who have children.

“(Stephen Siller’s) motto was ‘While we have time, let us do good.’ And that’s kind of what this foundation is based off,” Ryan said. “So all of that money goes back to doing good through these initiatives.”

Following the deaths of Sgt. Anthony Beminio and Officer Justin Martin, the organization helped raise money to pay off Beminio’s mortgage for his wife.

The organization began holding its 5K event in New York City in 2002 but has since expanded its reach to include several states and even a few places outside the country. Ryan said she’d always wanted to run in the 5K in New York City but had never had the opportunity.

But after attending the foundation’s 5K even in Wisconsin in 2016 and helping to raise over $1,000 there, the organization reached out to her to see if she’d want to establish a 5K in her own community.

“I readily agreed, obviously,” Ryan said. “And it was actually just a few months after that Sgt. Beminio and Officer Martin were killed and that the foundation pledged to pay off Sgt. Beminio’s mortgage. So the timing was really cool to see their involvement here locally.”

The first 5K Ryan hosted took place in September of 2017 in downtown Des Moines. She said close to 200 people participated, and they were able to raise over $23,000.

This year, the race will take place in Ankeny, starting and ending at the Ankeny bandshell. Ryan said since it will take place on Veterans Day, participants will be able to stick flags in front of the Ankeny Fire Station at the end of the race as an additional way to honor veterans and first responders.

The event in Ankeny will go from 9 a.m.-11 a.m. Sunday. Ryan said registration for Sunday’s 5K will open on the event’s website until Saturday. Same-day registration will also be allowed at a higher admission price.

The cost to enter is $30 for adults, $25 for first responders and members of the military, $15 for youth ages 13-17 and $12 for children 12 and under. Volunteers helping with the event may participate for free.

She explained that participants can set up fundraising pages on the event website where people can sponsor their runs. The money raised then goes back toward the foundation’s various charitable initiatives.

Ryan said she hopes to replicate last year’s success and see about 200 people participate at this year’s race.