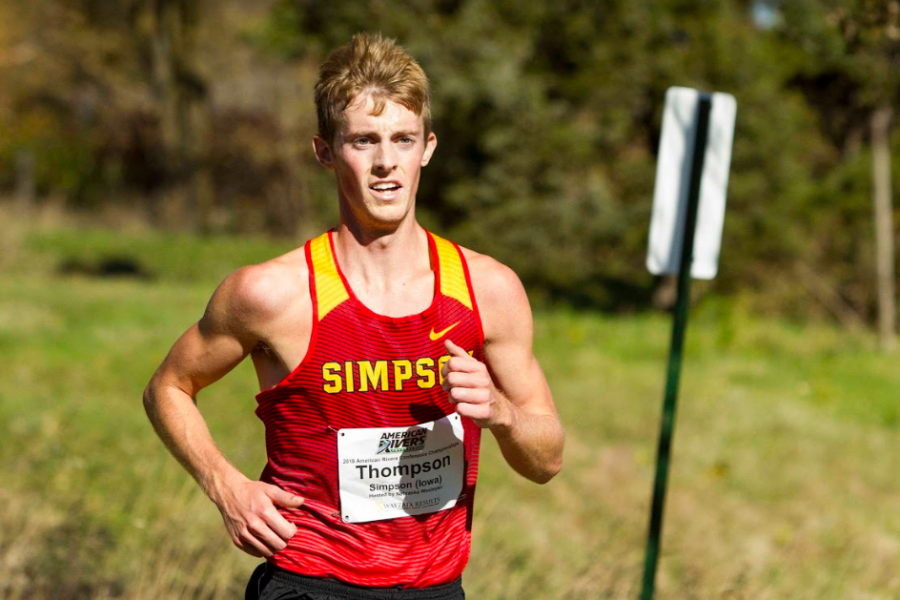 Senior cross country runner Trey Thompson has helped the Storm get to the front of the pack in the championship season. Placing sixth out of 175 runners, Thompson earned the first all-conference honors of his career and he helped the Storm place fifth overall at the American Rivers Conference Championships.

Thompson graduated from Ogden High School, where he ran on the cross country team. He decided to come to Simpson after taking a visit and having a great recruiting experience with head Coach Heath Moenck. Thompson, who is a mathematics major and secondary education minor, knew he was also coming to a school with strong programs he was interested in.

When Thompson was a freshman at Simpson, the regional team the year before returned every member. Thompson came in wanting to be at the top of the junior varsity team with that knowledge in mind—but by the end of the year, he was the third runner on the varsity team.

“The first year, I did not expect to be on varsity,” Thompson said, “When we had our first race freshman year, and I was the fifth runner, taking out some of the seniors in the roster. The whole year, I kept moving up and ended the year third on the team.”

Thompson had to keep working hard going into the next year, since he was No. 3 on the team.

“My sophomore year, I was already the third runner, and the first was a senior and junior.  They end up becoming my best friends, and we were all trained together that summer,” he said.

“It was our goal to change the culture of the team to be a winning team. In the past we were a team that was all in the middle of the pack, not at the top as a team.”

Thompson also continued his personal success right away his sophomore year by winning the home meet. He said the experience he gained during his freshman year helped him know what to expect going in to his second year.

“Also, I changed my race strategy to run harder and having the coaches to help me out a lot with that,” he added.

Now in his senior year, Thompson is the No. 1 runner for the Storm and one of the top runners in the conference.

“I think a lot of that is how in cross country, seniority is a big deal and making sure every single year you get better, since it is always senior heavy on the top,” Thompson said. “As everyone graduated, I waited my turn and moved up every year, and got aerobic running training under your legs and your lungs.”

An important part of Thompson’s training was not expecting too much out of himself right away. He said his goal freshman year was to be one of the top freshman and so on for every consecutive year.

“So when I get to senior year, I am the top runner, or at least try to be,” Thompson said. “I like that philosophy a lot, to work at your level and just keep everyone behind you and stay at your level working up.”

Thompson said he has not had a flawless running career but has been able to deal with his failures and not let them affect him negatively.

“You need failures to be successful,” he said. “Everyone thinks that is has been all success, since I came from a small school, but I have had failures before I was successful each time. I have had great senior leaders every year and I was able to fail behind them succeeding and saw what they did to ad on and make myself better.”

Leaving a different team then what he joined, Thompson will leave a lasting legacy on the team.

“I hope that I left the team full of hard workers that love to run. When I was younger, there were a lot of self-centered people that only really had personal goals and starting last year, we had big team goals, and everyone had team goals in the beginning,” Thompson said.

On Nov. 10, the team will travel to Waverly to compete in the regional meet.

“My personal goal is to qualify for nationals,” Thompson said. “For the team, we want to get as low as possible in the rankings, be in the top ninth to better our last year finish of 10.”