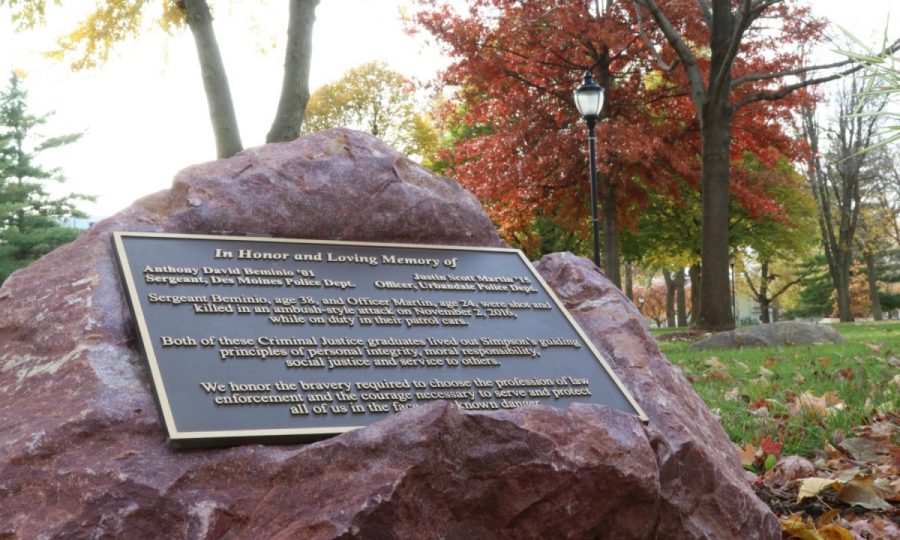 It’s been two years since The Simpsonian reported the deaths of Des Moines police Sgt. Anthony “Tony” Beminio and Urbandale police Officer Justin Martin, who were killed in ambush-style attacks while sitting in their squad cars.

Beminio and Martin were both graduates of Simpson College, Beminio having graduated in 2001 and Martin in 2015. Both officers were killed by an Urbandale man while sitting in their squad cars early in the morning of Nov. 2, 2016. 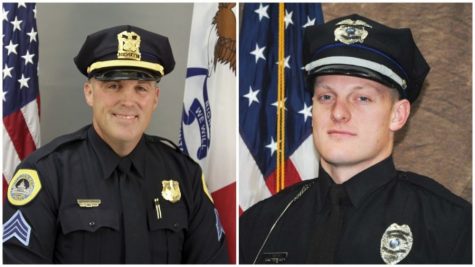 Shortly after Martin and Beminio were killed, Casey’s General Stores Inc. announced it would donate $50,000 to start two scholarship funds for future Simpson students in the name of Beminio and Martin.

The first student to have received the Justin Martin Memorial Scholarship is sophomore Joe McNally, who is pursuing a major—and future career—in criminal justice. McNally said when he first learned he received the scholarship, and also learned the story behind it, he felt it was an honor.

“It’s really allowed me to help chase my dreams and goals, which follow in Justin’s footsteps, which was law enforcement,” he said of the memorial scholarship.

McNally also said that, just as Martin had been during his time at the college, he also is on Simpson’s football team.

“So it really makes that personal connection, I feel like,” he said.

The students not only told her no, but that if anything, they were even more passionate about continuing on in that field.

And just like those students, McNally said a career criminal justice is right for him.

He explained he’s inspired to pursue a career in law enforcement because of the example of his own father, a state trooper.

“So that’s really all I’ve known is law enforcement and the feeling of being able to help someone and all the stories he’s told me about how rewarded he feels when he gets off work and feels like he’s done good for people,” McNally said.

“And the experience of being able to help someone is really what I’m looking for.”

The deaths of Beminio and Martin continue to resonate with Dallinger.

Since she started teaching at Simpson two years after Beminio graduated, she did not personally know him like she knew Martin. However, in a speech she gave last year at the one-year anniversary of the officers’ deaths, Dallinger had explained she knew him by his reputation and from stories others told about him.

“I would’ve loved to have Tony in my classes from the stories that I have heard,” she said in her speech.

One such story was when Mark Freyberg told her how Beminio had visited campus after graduating and brought his new baby to show to his former professors in their offices.

“He wanted to share his son with the people who he knew and respected,” she said.

“His friends told me that Tony was a great detective, very thorough, well respected and professional,” Dallinger said in her speech. “His friends said that he could always calm a situation down.”

Dallinger knew Martin personally during his time at Simpson and had him in several classes. She said he was usually fairly quiet in class, but when he did speak, his comments were always good.

The first course she really got to know Martin in was a May Term class which focused on putting social justice theories into practice.

“And he just seemed to really shine in that class, you could just really see,” she said. “And he made some really, really deep friends in that class. Some of the people that were really still close to him right up to the end.”

Martin had also volunteered to help with a separate social justice program Dallinger had led in which students partnered with young immigrant children.

“So he’s the one volunteering, and he said, ‘I could really help with that. I could help make this happen,’” Dallinger said.

Martin interned with the Urbandale Police Department while still a student and was offered a full-time position there upon his graduation in 2015.

Last November, the college dedicated a bench and an engraved memorial rock to the fallen officers. Both memorial objects are located to the southeast of College Hall and are visible from Dallinger’s third floor office in Wallace Hall.

A shadow box with pictures and other memorabilia of Beminio and Martin are also on display on the first floor landing of Wallace.