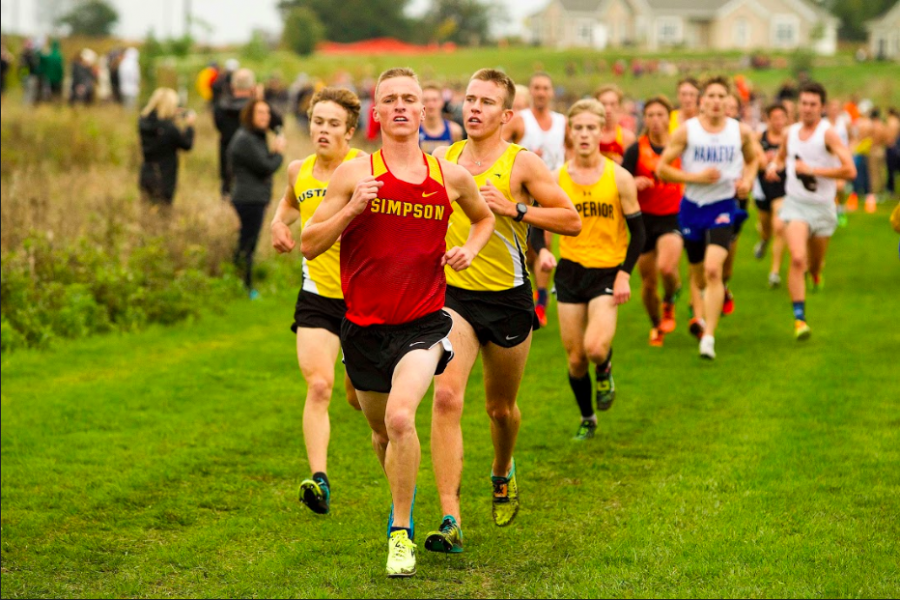 For the first time in school history, the Simpson men’s cross country team was ranked eighth in the U.S. Track & Field and Cross Country Coaches Association Central Region rankings poll for Oct. 2. Since then, the team has fallen one spot to No. 9.

“This fall, we have run more miles than any team I have had in the past,” Head Coach Heath Moenck said. “I think that is why we are seeing such big improvements from our guys, is that to be quality runners you have to put in quality miles and as a whole we are doing that at a high level.”

Simpson was ranked in the preseason but dropped out the regional top 10 in the first regular-season ranking.  After the Storm’s fifth place finish out of 19 teams at the Dan Huston Invitational on Sept. 29, they rose in the polls.

“It is always nice to be recognized for our success, but it means very little once the men get into the starting box because the men cannot use our ranking for the race,” Moenck said. “I would rather be ranked then not ranked but they understand it doesn’t carry a lot of weight for us as we get in the starting box.”

The team did expect to be ranked this year, as they placed 10th at regionals last season and returned five of the top seven runners.

In the Drews/Neubauer Invitational on Oct. 13, the Storm placed seventh out of 22 teams.

“This meet was important that we ran well because it was our last tune up before the conference meet,” Moenck said. “I feel good about where are team is right now. We are excited to go to conference championships here on October 27th.”

Thompson was the top individual finisher for the Storm at the Drews/Neubauer Invitational, placing 20th out of 294 runners.

“I tried to put myself out there this meet to be as low of a stick as possible for the team,” Thompson said.  “I am happy with my 20th place finish and a nice three-second personal lifetime best.”

Simpson is prepping for their last meets of the year coming up in November.

The team goal is to finish third at the American Rivers Conference meet. If that happens, it would be the highest finish in 28 years.

“My goal for conferences is to finish in the top eight individual spots. Top 15 is All-Conference, and I would like to be in the top half of those All-Conference runners,” Thompson said. “It’s a tough goal but attainable. My goal for regionals is to qualify for nationals. To qualify, I need to finish as one of the top seven runners not on a national qualifying team.”

The team has their goals set, and they’re ready for the conference meet on Oct. 27 in Lincoln, Nebraska. The regional meet is on Nov. 10 in Waverly.