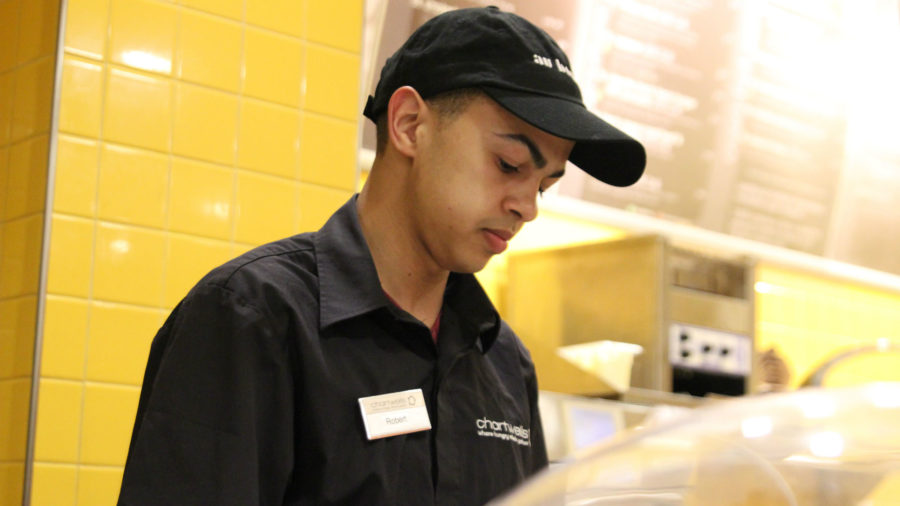 Au Bon Pain and other food-related services on campus vary in wait times. Either it takes 30 minutes for a sandwich or an order is wrong.

But what is it really like to work in food service?

Robert King works at ABP, and his main job is to prep work, specifically making sure the meat is sliced and the refrigerator is stocked with drinks and other pre-prepared food. He’s worked in food service since last year and also worked at Pizza Ranch for two years before he came to Simpson.

He knew what the environment was like but also didn’t know what to expect.

“Last year, I was more on the line, and that’s where you make the sandwiches and stuff,” he said. “This year, I wanted to be more prep because I didn’t really like working on the line.”

King said he didn’t like the rush. A lot of tickets would come in, and he felt like ABP was understaffed. A lot of the work pushed onto one or two workers, which meant a longer wait for sandwiches. If it were up to him, he would’ve preferred three or four workers on the line rather than two or less.

This year, he said it wasn’t as much of a problem.

Tyler West, who also works at ABP, does prep work but also works at the register and clean-up. Like King, he previously worked in food service, but he did his fair share of accidents when he first started out, such as with forgetting to put something on a sandwich.

He also said it’s difficult to work with a team on the line rather than individually. Co-workers would often get in your way or in your personal space, he said.

One thing he likes about ABP is that he doesn’t have to serve people like in a restaurant.

“What we’re told on our first day when we get there is that ABP is not a fast food restaurant, so take your time and make the sandwich right,” West said. “ We get a lot of people that came back up and ask you to put it on, and that takes more time out of it than if you could’ve done that in the first place.”

Students can also be more understanding than the older customers.

King said he worked at Pizza Ranch with complete strangers of all different ages. With ABP, it’s all college students, and some whom he knows or has taken classes with.

Dealing with unhappy customers isn’t uncommon, King said, which is what mostly makes working in food service an unpopular job.

It’s also constantly being on your feet. Still, he said he sympathized with students as he knows what it’s like to be on the other side of the counter.

“Being a customer, I know that I’m always right but I still want what I want,” he said. “ And when you work in food service, you have to give them what they want.”

If he could change something about ABP, King said he would change the set-up.

The set-up is a somewhat crammed space, and there’s also nowhere for customers to sit waiting on a sandwich.

Customers would get in the way of other customers looking at the soups or pastries. He also wants to change the way orders are set up and wants a system where you work on one customer’s order at a time rather than working on a plethora of tickets.

Andrew Harris, an intern for Chartwells, said, “You know, I understand that Chartwells has a negative stereotype on campus, and I totally get that. Maybe we don’t have the biggest change in one year, but as long as students are always open-minded, then the perception changes.”

Harris also worked with the Food Committee his freshman and sophomore year and would talk to people and get feedback about the food service.

As a whole, he felt that the organization and overall attention to student needs has improved. This year, Chartwells is hoping to promote a healthier lifestyle, such as with supplying a fruit bar in Pfeiffer Dining Hall.

“If you have a valid comment or complaint or something, say something to a manager,” King said. “We know what we’re doing wrong. We can’t help you if you can’t help us.”