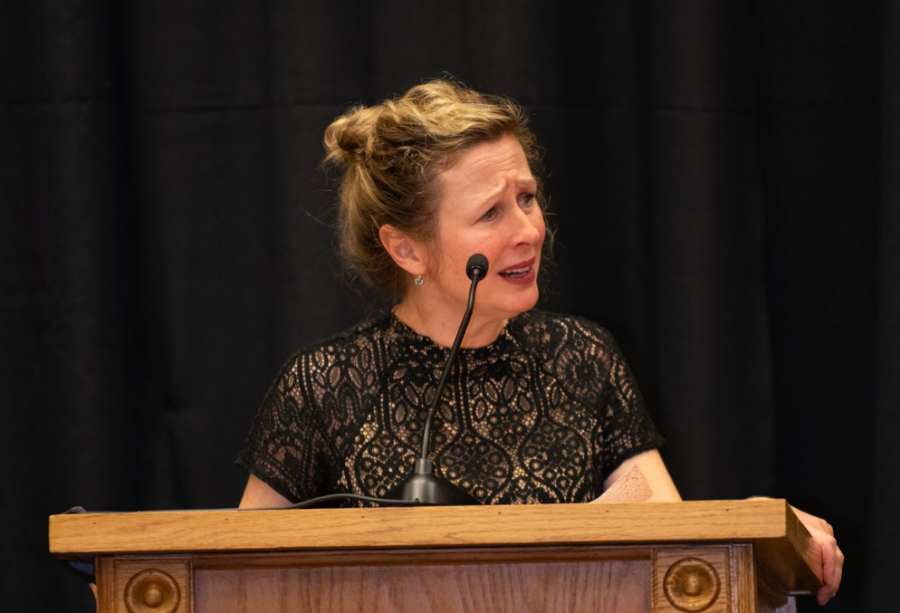 A 14th century Christian mystic and the concept of “eschatological reclamation” were the focus of this year’s Matthew Simpson Lecture, which took place Tuesday night in Hubbell Hall.

Amy Laura Hall, associate professor at Duke University, explored the idea of eschatological reclamation in her recent book, “Laughing at the Devil: Seeing the World with Julian of Norwich.”

She said eschatology refers to words about the end of time, while reclamation refers to the act of claiming something again.

“Reclamation is a helpful word to put alongside eschatology because it announces we are going to be reclaimed. Claimed and brought together by God,” she said.

“Julian of Norwich is, as far as we know, the first woman to have written a book in English,” Hall said. “And English was the vernacular in the part of the world that she was living in at that time.”

She said Julian lived during the turn of the 14th century into the 15th century, when written communication about God was expected to be in Latin.

Hall explained that in 1409, the archbishop of Canterbury had issued a document called the Arundel Constitutions, which strictly regulated the teaching and translation of the Christian Scriptures. This document also effectively banned the use of English when reading or speaking about Scripture.

“Do you get what this means? You wouldn’t be allowed to read scripture in English, or have it read to you in the vernacular, in the words that you can understand,” Hall said.

One of the reasons Hall said the use of English was banned was to prevent women from becoming religious teachers, an idea that was taboo at the time. She said the language restriction was also meant to prevent non-clergy members from taking an interest in teaching, rather than learning, about Scripture.

However, despite being a woman, Julian of Norwich wrote extensively in English about visions of God she experienced after she became sick with the plague. In these visions, Julian saw images of God and Jesus with messages emphasizing God’s love and redemption of humanity.

Hall explained that during the time of the plague, priests would deliver the last rites to the deceased; if a person didn’t receive those rites, they were considered to be “lost.”

However, since priests would often contract the disease themselves by delivering the rites, there came to be a shortage of priests. Many people therefore died without receiving last rites.

“So people had died in a way that, by the theological doctrine of the time, they had died lost,” Hall said. “So Julian’s vision of everyone and everything being redeemed, reclaimed by God is in that context.”

For example, she said Julian’s visions run counter to Christian faith which manipulates believers’ anxiety or fear to produce obedience.

“Julian’s visions offer a hardy rebuttal of this use for Christians and for non-Christians who must navigate a political scene where Christian language is often used to scare people,” Hall said. “Preachers, showcased by major media outlets, too often speak a false gospel of obedience and order—what I call ‘the gospel of austerity.’”

After Hall concluded her lecture, junior Lexy Moran asked her how studying Julian of Norwich has impacted her teaching style. Hall replied that she has begun assigning her students to read Julian of Norwich’s writings for classes.

“It’s also helped me not be ashamed or apologetic about the fact that I teach speculative, vernacular theology,” Hall said.

Sophomore Jailyn Seabrooks asked how Hall is able to reconcile her Christian beliefs with obsolete beliefs about women. In response, Hall said she wrestles with Scripture until it blesses her.

“I’m just going to keep wrestling with Scripture until it blesses me.”