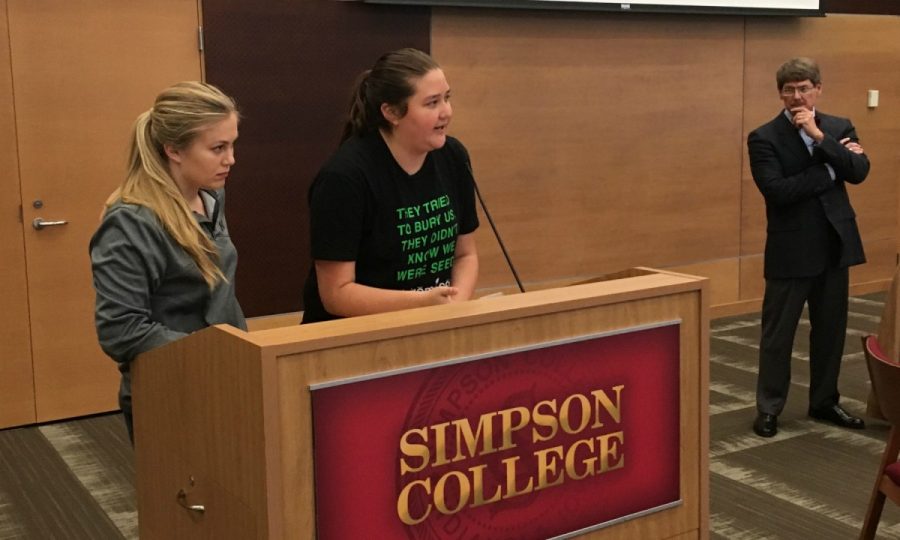 Simpson College will eliminate 13 full-time faculty employees within the next six to 24 months, according to President Simmons in an email sent out to students Wednesday.

“These changes involve the closing of a department, the elimination of two majors, restructuring of one major, as well as the planned departure of several employees. These decisions follow a comprehensive, yearlong program prioritization process focused on strengthening Simpson College’s financial and enrollment profile,” Simmons said.

The college will close the art department and will eliminate the French and German majors as a result of the faculty cuts. Simmons said the reason for these eliminations was declining student interest for those topics. The graphic design major, however, will still be offered.

He said the college will also restructure the clinical health science major in the pre-healthcare curriculum through the natural sciences department.

Simmons said the college will ensure that students who have declared majors in the affected areas of study will still able to complete that major at Simpson.

Simpson is not currently planning any further faculty reductions, according to Simmons.

However, he added, “[W]e still have work to do to ensure that our revenues and expenses are properly aligned. That work will require us to be continuously strategic and considered as we evaluate our programs and services over time.”

The news of the 13 faculty cuts came on the heels of a contentious faculty meeting earlier that day in which faculty members questioned Simmons about the process in which the cuts were decided.

In addition to the majors which are being cut, this round of layoffs will also eliminate individual faculty members of majors which will still remain.

Academic Dean Kent Eaton answered by saying the college would have to eliminate departments that are least profitable.

“Quite frankly, if we were to use the data from the prioritization process, what we would have right now is a college without the arts,” Eaton said.

He said that there hasn’t been an academic department untouched by faculty reductions, even the top ranked departments.

“No one wants to see your department, the history department, reduced,” Eaton said. “We have to reduce somewhere.”

Eaton also referenced a faculty meeting last week in which the faculty voted their support of whether or not to declare that the college go into financial retrenchment.

“…[T]he message we got back from the faculty, from you, the majority of you (…) is that, ‘No it’s too hard for us to look at our peers and say this is a position that we need to eliminate in order to be able to move forward. You administration need to do that work for us.’ I think that we need to understand that we are in this position, in part, because of that decision that you made,” Eaton said. “Now we have to live with the consequences of that.”

Eaton responded by agreeing that only the president can declare retrenchment and that faculty voted on whether or not to encourage the process.

“By vote of, I believe it was 58-42, the faculty said ‘No, administration you make the difficult call,’” Eaton said.

Jennifer Nostrala, professor of theatre, asked how many positions would need to be eliminated in order to close the college’s budget deficit of $2.5 million, which has been the main driver of the faculty reductions.

Simmons said the faculty cuts both from this year and last will put the college at a 15:1 student to faculty ratio by fiscal year 2021, a ratio which he said is based on Simpson’s historical averages and makes it competitive with other Iowa colleges.

He did not specify what the total savings in revenue would be by laying off the affected faculty.

Faculty members also mentioned the role of the Office of Marketing and Public Relations in attracting students to the college and thereby boosting revenue from enrollment numbers.

“We are an enrollment and tuition-driven institution, so the rise and fall of the budget is based on the number of students and the revenue that they generate. This is an admissions and recruiting problem,” said professor of history, Rebecca Livingstone.

“Now people, the faculty, who are the heart of this institution, they are a part of what we do here at Simpson are bearing the consequences of the lack of leadership in those two departments,” Livingstone added.

Simmons said the college is always looking to improve marketing and public relations strategies and referenced changes in admissions staff, as well as technology.

“We have, in effect, gained the equivalent of maybe two full-time recruiters with the implementation of new technology in that office this summer for recruiting this next fall’s, fall of ‘19 class,” Simmons said.

Toward the end of the meeting, the faculty motioned to move the meeting into closed session in which only faculty were allowed to remain. This move was called because Simmons had information he did not wish to share with the faculty if students were present.

Before students were told to exit, Student Body President Emma Schlenker and Student Body Vice President Cecilia Martinez addressed the faculty with a brief message expressing their love and support for all faculty members.