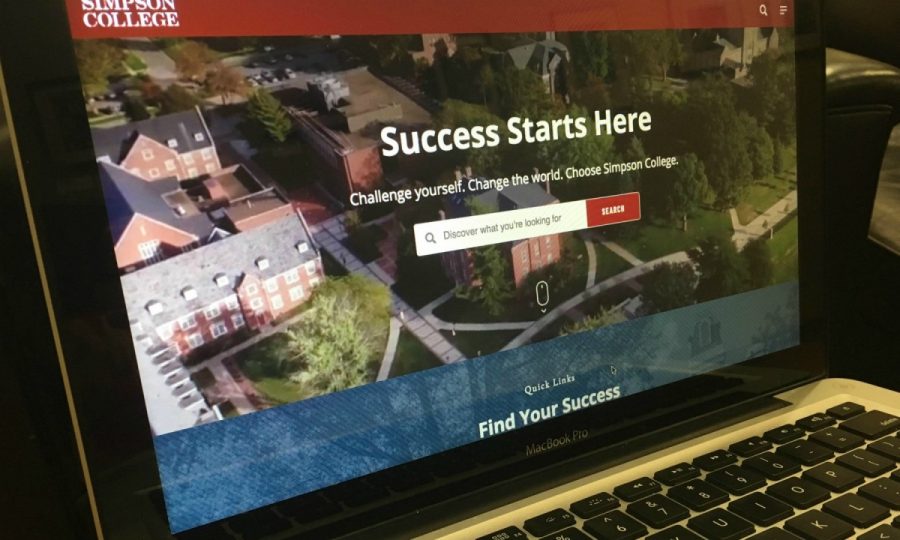 The office of marketing and public relations notified campus in an email sent out on May 17 that the original launch date was to be June 30. However, on June 27, the office again emailed campus saying the website launch would be delayed.

Johnson said the college had launched the planning process of developing a new website about six years ago, shortly after Johnson began working for Simpson. She said the college was overdue for an update because websites should normally be updated every two to three years in order to keep up with trends in technology.

She explained the main goal of the web redesign was twofold: to maximize search engine optimization, which refers to the ease with which outside audiences can find information about a website on search engines such as Google, and to make the website better appeal to prospective students.

The website is divided into two parts: an external and internal website. The external website is geared toward outside audiences such as prospective students, parents and high school guidance counselors, Johnson said.

Since the old website stored so much old information that wasn’t relevant to an outside audience, Johnson said its search engine optimization became bogged down

“So when a prospective student is searching for us on Google or whatever engine they’re using, we don’t pop up as much because there’s lots of pages that don’t get used very often,” Johnson said.

For senior Jonathan Steinkruger, the new website came as a sudden change from what he was used to.

“When I first found out about it, I was actually in class, so I had to ask a classmate to help me find the internal page because we had to go to Scholar, and I couldn’t find the link for Scholar,” Steinkruger said. “So that was a problem at first.”

“I guess I was just used to what it was for the last three years, and it was kind of an abrupt change,” he added.

It wasn’t until May 2017 that the board of trustees approved the allocation of funds to create a new website. Later that summer, the college chose the Ohio-based branding agency, Ologie, to develop the website, according to Johnson.

After Ologie’s web developers initially visited campus in fall 2017, Johnson said the college had weekly, ongoing telephone meetings with them throughout the rest of 2017 and into 2018.

Every time she asked that question, they responded with yes. “Until we got to about late May, early June,” she said.

Around that time, Ologie called Simpson and said they wouldn’t be able to meet the original deadline. Johnson said she doesn’t know exactly what happened on their end, but that the company’s president told her the delay was due to “internal changes and challenges.”

“And the president told me that she felt that our project fell through the cracks, which, I didn’t like to hear that at all,” Johnson added.

Johnson said she stopped paying Ologie after they told her of the delay and then pressed them to ramp up their efforts in completing the website. As a result, she said the developers completed about six months of work in about two-and-a-half months.

She said Simpson contracted Ologie to create the new website for about $175,000, but since Johnson stopped paying them, there is still an outstanding balance the school will not pay.

Additionally, Johnson said she will ask Ologie to refund some of the money Simpson already paid due to the delay.

Although the web developers finished the project later than anticipated, Johnson gave them credit for the new website itself.

Although Van Deusen knew the site update was going to happen, he said he was trying to reserve a room for a meeting the first time he went onto the site and was surprised at how it looked.

“So when I first went on the website, it was like, ‘Am I on the right website?’ Because it looked a lot better, it looked sleeker, it looked nicer,” he said.

Van Deusen said that while he was working for the admissions office last year, he was often told to direct prospective students to the college’s website to learn more about Simpson and to schedule visits to campus.

“So now that the website is updated, it looks newer, it looks cleaner, is completely huge for incoming students and admissions itself,” he said.

Johnson acknowledged that after the website initially launched, Google searches to specific pages to the website were not functioning correctly. She said this is because Google had not fully indexed the new website yet; that process would take approximately a week to 10 days.

She also acknowledged that the search device in the external page was not functioning properly and was another wrinkle of the new website the college is pushing Ologie to iron out. On Tuesday, however, she emailed campus saying the problem appeared to be resolved.

Overall, Johnson said the benefits of the new websites are worth the costs and is glad it is finally available.