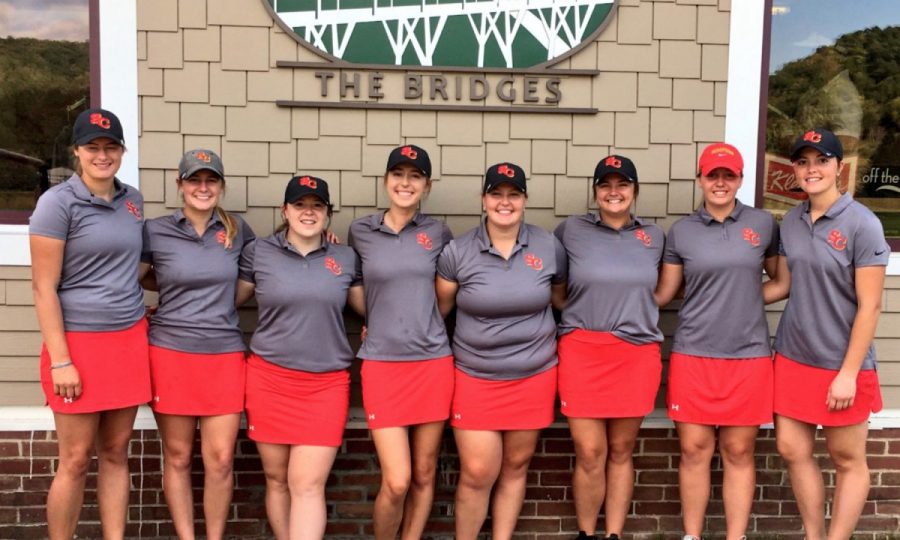 The Simpson women’s golf team is preparing for the American Rivers Conference Championships on Sept. 29 and 30 in Cedar Falls, Iowa. The tournament will continue the following weekend in Decorah, Iowa.

The team is looking to improve on their short game and developing confidence in their abilities. Head Coach Larry Shoop is confident in his team.

“Last year we finished fourth in the conference, a step up from previous years,” Shoop said. “Our goal is to crack the top three in the conference. It is going to take some really strong efforts, but they are capable of doing that.”

Junior Hannah Gordon made a big impact on the team, earning a first place finish in the Saint Mary’s Invitational on Sept. 16.

“That weekend was funny for me,” Gordon said. “The first day on the first nine holes I was not playing well, but the second I pretty much parred out. So I completely turned around my game in the second nine. I think that is really telling that you can’t give up. It was definitely a boost of confidence.”

Not only did Gordon win the the tournament, the team also placed second overall out of six teams.

“We have never been there and it was a difficult course,” Shoop said. “The temperature was really warm, and it got to us the second day. We did not perform our best. I was overall pleased with their effort.”

The latest meet was at Buena Vista on Sept. 22, where the team placed third out of seven teams. Shoop is happy with how his team performed the past two meets and hopes they continue the trend into conferences.

“We are going to go up there and keep pressing along and refine our skill set and our competitiveness,” Shoop said. “Then we are going to practice our short game and putting in preparation for conference tournament. We are not done yet and we realize our capabilities.”

Gordon hopes to take the next two weekends of conference meets to work on her goal of earning a lower consistent score.

“I know I have yet to play a really good round,” Gordon said. “I am happy with keeping consistent scores, that has always been a goal of mine.”

To be able to achieve their goal of placing third, the whole team has an idea of what their scores should be.

“I think that a goal would be all of us putting together a good round,” Gordon said. “For the team, we want to lower our team score. Our top five can definitely shoot low to mid 80s and

Coach Shoop believes this is attainable with last year’s finish and his top five players being returners.

“I think they can get it done. It’s just putting forth the mental and physical effort to get it there,” Shoop said.