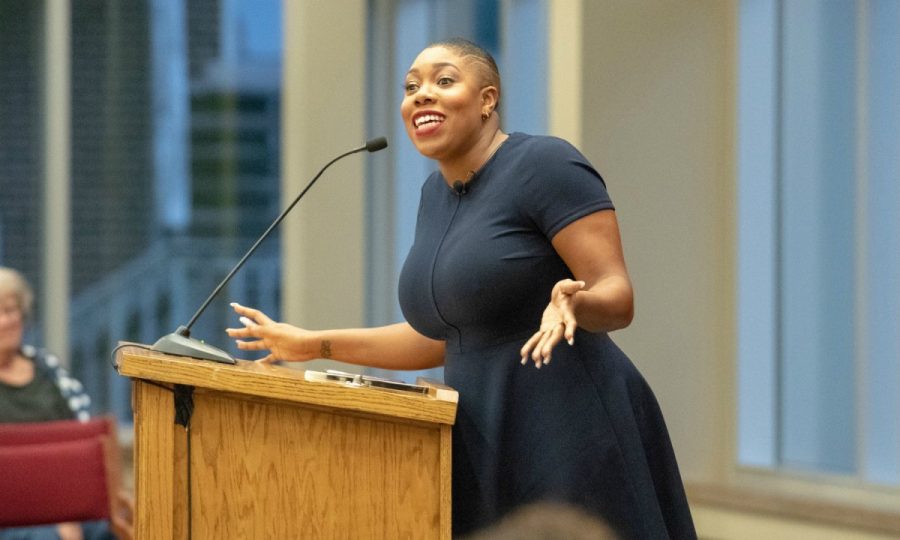 Symone D. Sanders motivated young people to stand up for what they believe in at the eighth annual Culver Lecture on Tuesday, Sept. 25, in Hubbell Hall.

Sanders is a political commentator on CNN and former national press secretary for Bernie Sanders’ 2016 presidential campaign. She spoke to an audience of approximately 250 students, faculty and community members.

Sanders’ lecture focused largely on the role young people have in shaping the world and the power of being a young person in America.

Sanders interned for her county commissioner, Chris Rodgers, in high school. His specialty was juvenile justice reform. She attended a juvenile detention alternatives initiative meeting with him.

“I said: ‘Chris there were no young people in that room–and there were only two people of color, me and you– talking about a what should happen for system-involved young people who are overwhelming black and brown in Douglas County, Omaha, Nebraska,’” Sanders said.

No part of the committee’s plan involved asking those who had first-hand knowledge and experience with the system.

Sanders once believed the three most powerful professions were a judge, politician or a chef. In college, she worked with the mayor of Omaha on a recall election as well as other campaign work. She learned through her campaign work that it’s the people who are important, not only the politicians and judges.

“The most powerful thing in the world I could be was a young person that helped craft the message, that maybe it’s not just the judges and the politicians that hold the power,” Sanders said.

She emphasized the importance of being a young person and advocating for an issue that would bring people of all views together.

Sanders explained how both conservatives and progressives are needed in the political climate in order for there to be discussion and change.

“A young person in 2018 is one of the most powerful things you can be in America,” Sanders said. “Young people across ideological lines and spectrums, they have the power.”

Sanders went on to explain that asking for a job can be difficult, especially when a person doesn’t fit the ideal description for that job. “In this moment, to be a true radical revolutionary, sometimes we have to pick ourselves. Sometimes we have to throw the idea of normal, the concept of normalcy out the door, because what in fact is normal?”

In order to be a true radical revolutionary, Sanders said one must act, not wait.

“We cannot wait for permission,” she said. “No one is going to give you permission to step up. Power concedes nothing without a demand.”

At the end of her lecture, she took a few questions from the audience and answered them in-depth.

“Today’s political issues really center around young people, so the fact that she spoke to young people and encouraged them to speak out for what they believe in is a really good thing,” junior political science major Courtney Craig said of the lecture.