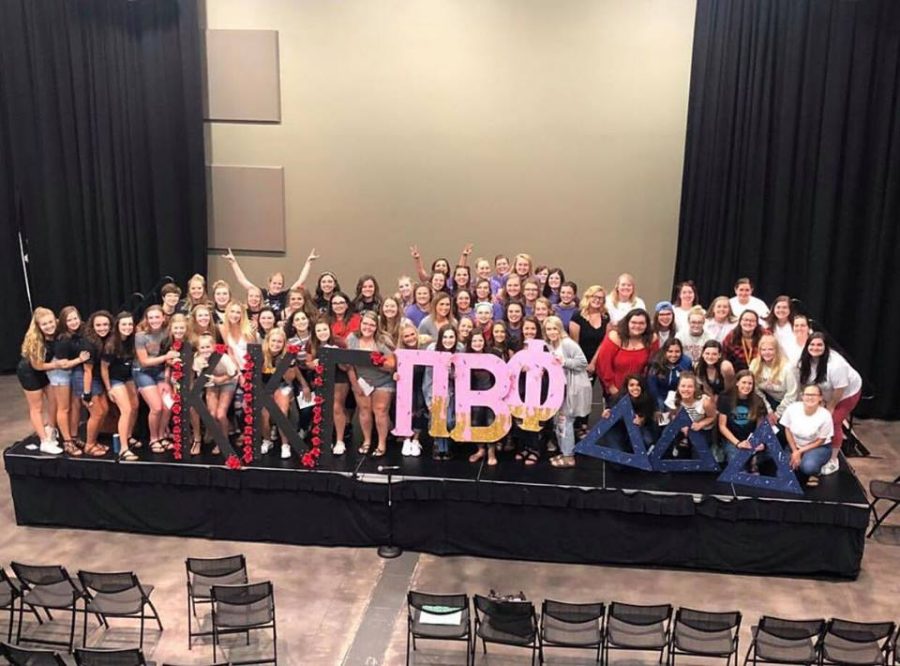 Harper is one of the executives on the Panhellenic Council. The council has worked to prepare for recruitment since March, but Harper had the daunting task of organizing it all.

This year’s theme was “No matter the letters, we all rock together,” resembling an ’80s rock theme.

Harper coordinated with the houses to make sure they followed all the rules. She also answered any questions they had, organized and trained recruitment counselors, reached out to women who were interested in the process, gave them information about how to sign up and made sure the weekend ran smoothly.

Of the 56 women who went through recruitment, 32 joined a house, Harper said. Even for those who didn’t join a sorority, Harper said this experience will still help their future.

“I think being in a house is definitely beneficial whether you just go through recruitment or you go through it all four years. It’s something that you can gain a lot of experience from,” Harper said.

The 24 women who didn’t join a house could have dropped for a variety of reasons, Harper said. A lot of people sign up just to see the houses. She also said there were concerns connected to the Simpson Promise. A sorority can be expensive during the first year, so the money may have been an intimidating factor.

The weekend kicked off on Sept. 7. The first night consisted of five rounds of open houses at Delta Delta Delta, Kappa Kappa Gamma, Sigma Lambda Gamma, Pi Beta Phi and Panhellenic Council. Recruits learned basic information about each house and saw the place they might call home for the next few years.

Later that night, the potential new members ranked the houses in order of preference and could attend up to three houses the next day, depending on which houses they were invited back to.

The second day was all about philanthropy. Potential new members got a better look at what the house values and if their values aligned. They filled out their preference cards again and were able to attend up to two rounds the next day.

The final night was the night they were waiting for. The potential new members sat on their bids in Black Box as they anxiously awaited the moment they could open it.

When everyone opened their letters, they ran to the seniors of the house.

“It’s a very intimate night,” Harper said about the final night. “There’s girls that can sometimes cry during that round just because it’s very personal and we talk a lot about sisterhood.”

Junior Sarah Barry was a recruitment counselor this year. She helped guide three potential new members through the weekend, signed women up for recruitment and answered any questions they had about the houses or the weekend.

Harper said recruitment counselors moved in one week before the rest of the student body and spent about eight hours a day training.

They learned facts about each house equally so they could stay objective when advising their potential new members and answering their questions. Recruitment counselors were also trained by counseling services on how to have constructive conversations and be good listeners.

Simpson sororities do a values-based recruitment, meaning they focus more on conversations rather than showing off the houses.

Each house has a limit of $700 for the weekend, so it’s minimal decorations, Harper said. They want the women to join because of what the house values, not what it looks like.

Sophomore Lindsay Richter joined Tri Delta this year. She received a big push to go through recruitment from her aunts who were in the sorority in the ’80s, she said.

“I’m very glad I decided to go through it, especially in my second year at Simpson,” Richter said. “My favorite part about it was the ease in which I could talk to new people. All of us girls going through got to know each other in the matter of a mere three days, and the house members were very welcoming.”

Both Barry and Harper agreed that sisterhood is something special.

Barry described her sorority as her family.

“My favorite part is just the support system. They’re always there for me and even girls in the other houses I can talk to because they understand what it’s like to be in a sorority,” she said.

Harper echoed Barry. “It means that I have an incredible group of women there to support me no matter what.”