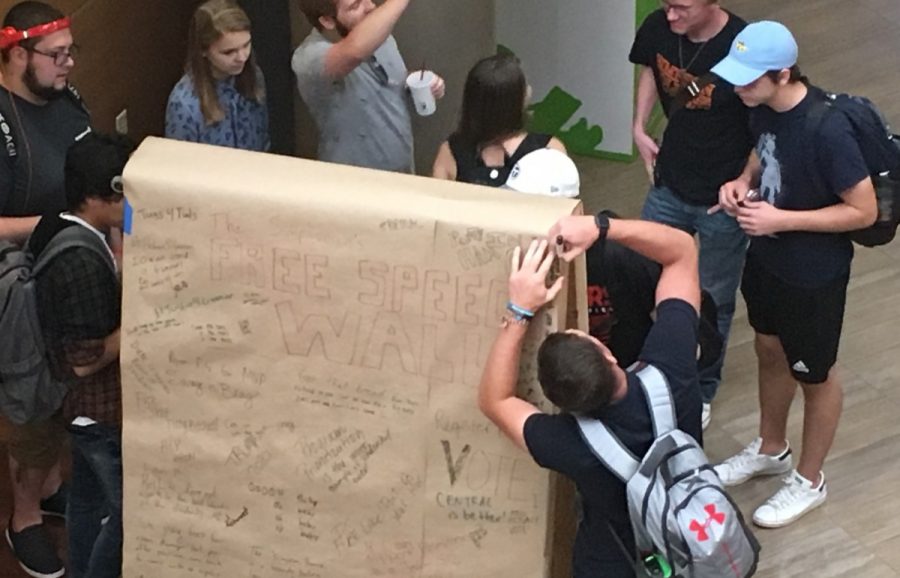 A Simpsonian tradition stood in the middle of the Kent Atrium for two hours on Monday and was quickly surrounded by a crowd of students who had a thing or two to say.

The Simpsonian holds the Free Speech Wall activity every year on Sept. 17, as a way for passersby to express their thoughts on absolutely any topic they choose.

Students, staff and faculty are able to write anything on the Free Speech Wall, meaning the messages can be as serious, silly, vulgar, irreverent, or thought-provoking as the writers want them to be.

People can even take aim at other people or even the school itself by writing down complaints, criticisms or even insults (a bit like a person’s Facebook wall, come to think of it).

Given that some of the comments can be downright offensive and obscene, you may wonder: Why do we insist on doing this every year?

The answer: to celebrate the right to freedom of expression.

Two years later, the Bill of Rights was added to the Constitution, thus giving the people of the country certain protections from the government—including the right to freedom of expression that’s enshrined in the First Amendment.

This is why in the U.S., you’re allowed to say all manner of speech, even if that speech is critical or insulting of those in power.

The next question you may have: But since Simpson is a private school, and not a government entity, does the First Amendment’s protections of free speech still apply?

No and yes. Technically, a private entity such as Simpson College can suppress speech it doesn’t approve of and not run into any legal trouble under the First Amendment.

But as a liberal arts school, Simpson also recognizes the importance of allowing diverse opinions to be heard and of students to be able to express themselves how they see fit. That’s also why the college allows your campus newspaper to get away with publishing so many stories that can make the school look bad at times.

The college also recognizes the importance of Constitution Day by hosting an annual Constitution Day lecture delivered by a prominent individual typically involved in the world of civil liberty, law or journalism.

This year’s Constitution Day Lecture will take place at 7 p.m., Sept 27 in Hubbell Hall. The speakers will be Iowa Supreme Court Chief Justice Mark Cady and University of Iowa Law Professor Todd Pettys, who will be discussing the origins and legacy of the Iowa Constitution.

If you wrote on the Free Speech Wall this year, good for you. You exercised your right of free speech and maybe had a laugh or two. But if you want to learn more about your basic civil liberties as an inhabitant of Iowa, and of the U.S., consider coming to the Constitution Day Lecture.

In the meantime, The Simpsonian encourages you, as always, to use your free speech wisely.

In other words: Be informed and be passionate—but also, find a way to be kind.