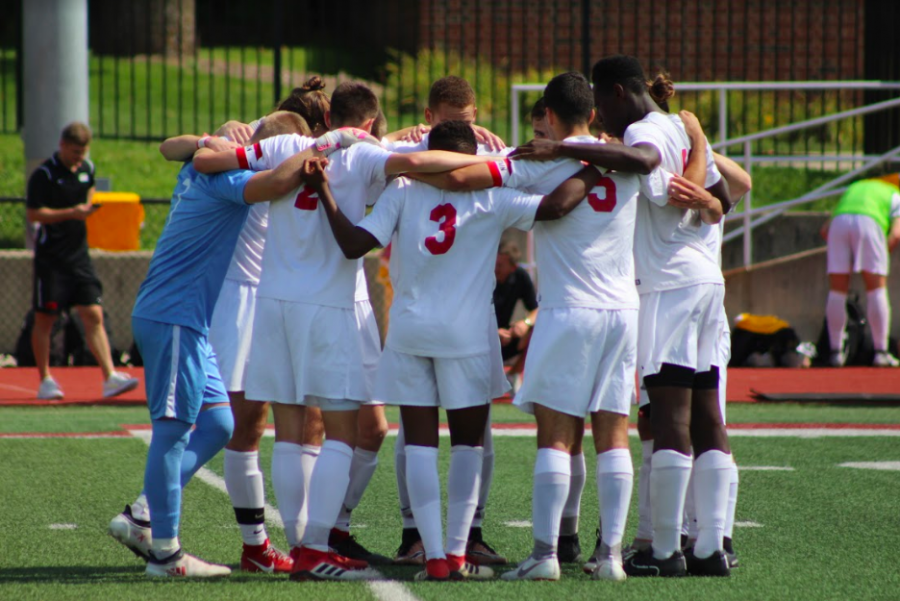 Finishing last season with a record of 15-3-2 overall, third place in the Iowa Intercollegiate Athletic Conference (IIAC) and the most wins in school history, the Simpson men’s soccer team is ready for work this season.

“We will have a different identity this year, but our foundation and principles remain the same,” Head Coach Rick Isaacson said.

The Storm returns eight of the 11 starters from last year and brought in many new faces to provide depth for an already deep team.

“Our entire back five remains intact. We return all-conference performers in Tanner Alderson and Jake Potratz,” Isaacson said. “We have an exciting group of newcomers. We brought in 13 freshmen and two transfers to supplement our core group of returning players.”

Alderson is one of the top players returning this fall. Last season, he scored 16 goals and was named first team all-conference. He’s already scored two goals and is excited for the rest of the season.

“It was one of the better preseasons I have been a part of,” Alderson said. “The more we bring in good, new players, the better and more competitive it will be. Especially coming off summer, where we get to see who is in the best shape and who has the biggest drive to play.”

With a deep roster Isaacson is aware that it changes the team and culture. He says his squad is driven and working hard for the upcoming season.

“We always learn a lot about our team during preseason camp,” Isaacson said. “This year was no different. We are still rounding into form but the potential for a special season is there.”

After finishing third last season, Simpson was picked to finish fifth in the American Rivers Conference, formerly the IIAC, Preseason Poll. Isaacson doesn’t see that as a bad thing.

“We were picked to finish fifth in a poll of league coaches and that might be low, but that prediction is an indication of the overall quality of our league,” Isaacson said. “We play in one of the toughest Division III conferences in the country.”

Alderson is using the projections as a way to keep motivated throughout the season to prove the conference wrong.

“Being that we placed third in conference the last two years, personally, seeing that we were projected fifth irritated me,” Alderson said. “Especially since we beat two teams ahead of us the last two years. But I think that fueled the fire to prove we are not a fifth place team, and we have just as much skill and talent.”

Though there may be changes within the team, coaches and players still have lofty goals for the end of the year.

“The goal every year is to win a conference title and compete in the NCAA tournament,” Isaacson said.

The Storm are 4-2-1 on the season and start conference play Saturday at Central College.

“Come out and support, when you get the chance,” Alderson said. “This year will be a good year for the team, and a season to keep your eye on.”