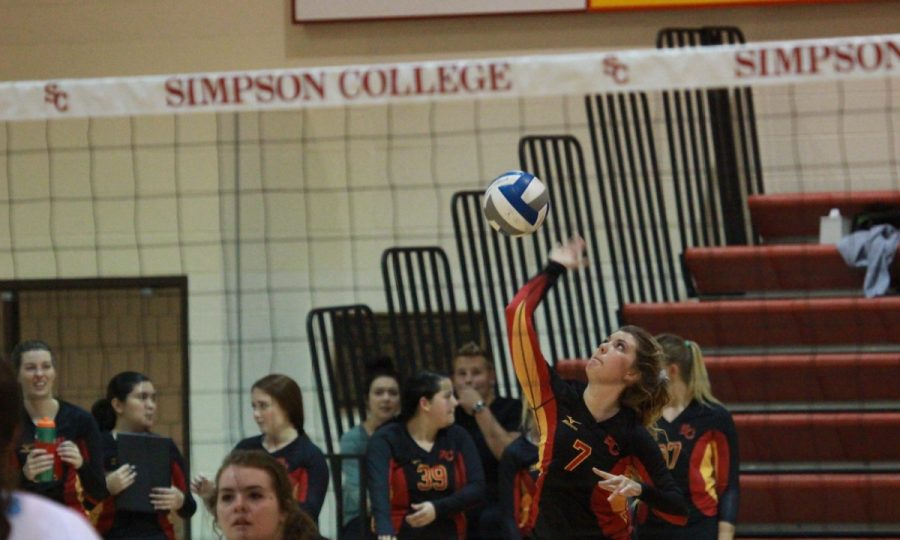 Heading into the 2018 season, the Simpson volleyball team is looking to make a name for themselves in the American Rivers Conference.

The Storm finished 9-17 overall and 1-7 in conference play a season ago. Head coach Lana Smith, who is in her 20th year at Simpson, said the team has many goals but one constant.

“The goal for us this season is getting better every single match,” Smith said. “Every time we step on the floor, we’re going to improve, we’re going to get better, play with high intensity and we’ll be in every match.”

Last season, the Storm finished eighth in a very competitive Iowa Conference. This season, the ladies were picked to finish eighth again by the American Rivers Conference Preseason Coaches’ Poll.

“I feel like if Hannah can continue to up her game, we’re going to be able to make up for some of that,” Smith said. “We are ladened with freshmen, sophomores and juniors, and we don’t have any seniors in our varsity program. Learning, getting better and upping our volleyball IQ in every match is important.”

The Storm have already started the season and are sitting at 4-6 overall through 10 games. This includes a conference win over Central College last Tuesday.

Although the record doesn’t necessarily show it, Smith has seen some encouraging things from her young team.

“We are fast, and I think we have good ball control,” Smith said. “That has really helped our defense. We are still looking to be more efficient in our offense, but when all the stars align, we’re really fast in our front row.”

While she sees a lot of positive things on the floor, Smith says her team has a lot of room to grow. Her squad is full of young players who want to grow and get better. She says that the ladies have to want to improve every day in practice and in games.

“For us, it’s going to be consistency,” Smith said. “We can get some outstanding performances from some and then we can turn around the next day or two and not get the same. We need some consistent performances from more than one or two players to be able to sustain within the conference.”

The Storm will travel to Wisconsin for the Wis.-River Falls Invitational this Saturday, Sept. 15, and continue conference play on Sept. 18 at Luther College.