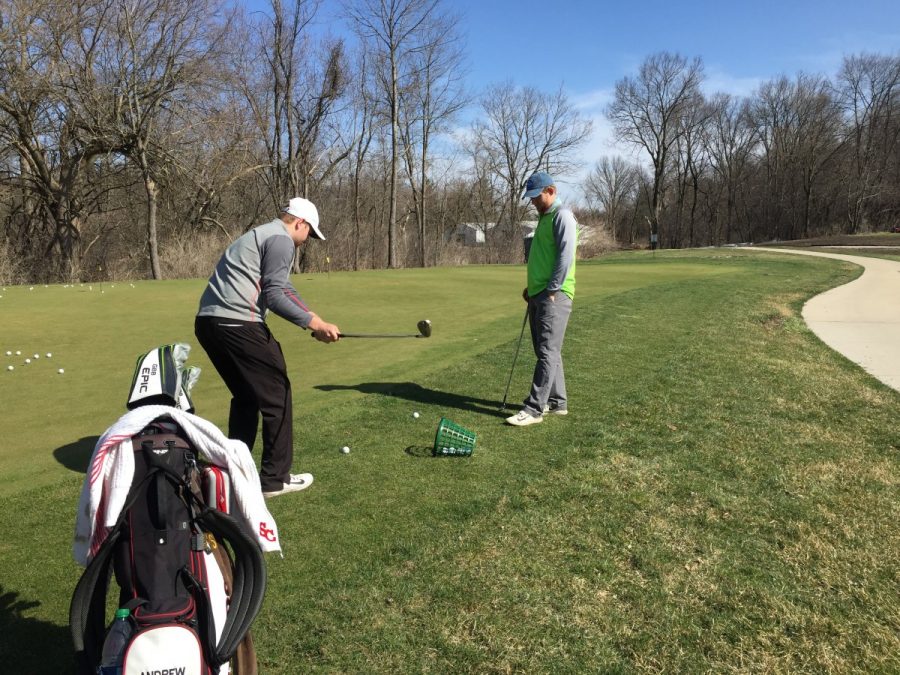 In what seems like a long season with no end in sight, the men’s golf team will finish up their final weeks of the season as they compete in the IIAC Championships starting on April 27.

The season started back in September, and a lot has changed since then.

The Storm haven’t been able to take much course of action during the spring portion of the season due to weather constraints that cancelled three meets.

Despite fewer opportunities to play this spring, the team has shown improved performances.

A couple of weeks ago at the Simpson Spring Invitational, the Storm took third place out of five teams on the first day of competition.

Junior Blake Bender thought the team played well despite their lack of competition this season.

“We haven’t had that many swings so far this year, but I think we played OK despite some rough weather,” Bender said. “We know that we don’t have to play our best, and we can still shoot a good score.”

Bender said the team dynamic is almost entirely the same as it was last year, which helps the team remain stable and continue to improve as the season progresses.

However, a newcomer is making a push for a spot on the starting lineup.

“We returned basically our whole varsity team from last year, which included three all-conference golfers, which is huge,” Bender said. “We also have one freshman who is really pushing for a varsity spot. He’s shown the most potential out of anyone on the team.”

That freshman is Nathan Eaton, who has been stellar so far this season.

Freshman Nathan Eaton led the team at the Spring Invitational with a 78 to tie for eighth place. The team as a whole shot 320.

On the second day, the Storm fired back quickly. Once again, freshman Nathan Eaton led the team with a score of 72 to tie for second and lead the Storm to a first-place finish. Senior Korbin Sesker shot a 73 to place fifth. However, the biggest highlight of the day came from sophomore Reid Cobb, who shot a hole-in-one on the par-3-seventh—the first of his collegiate career.

Eaton said it was fun to play on a familiar course for the Spring Invitational and, the team used that to their advantage.

“It was a really nice day,” Eaton said. “Playing a course you’ve played before and you know where your misses are, it was nice to have that advantage.”

The Storm’s most recent meet took place on April 13 at the Wartburg Invitational. Teammates Blake Bender, Nick Hartman and Korbin Sesker carded a 7-over 79 to lead the Storm to a fourth-place finish out of seven teams.

The Storm finished only five strokes behind third place Wartburg with a score of 317. The tournament was originally scheduled for 36 holes but was altered due to the threat of inclement weather.

Next up on the schedule is the IIAC Championships, which start on April 27 at Finkbine Golf Course in Iowa City.

Eaton said it doesn’t matter how the team has performed all season, any team can put it together on the four rounds of the IIAC tournament and win the conference.

“We could play horrible all year and end up putting four good rounds together to win the conference,” Eaton said. “It just depends on who shows up for those four days.”

Since they took second place last year, the guys expect to perform well at the IIAC Championships again.

“We have enough golf under our belt to not have the excuse that we haven’t been able to practice enough or get swings in,” Bender said. “We should expect to win.”