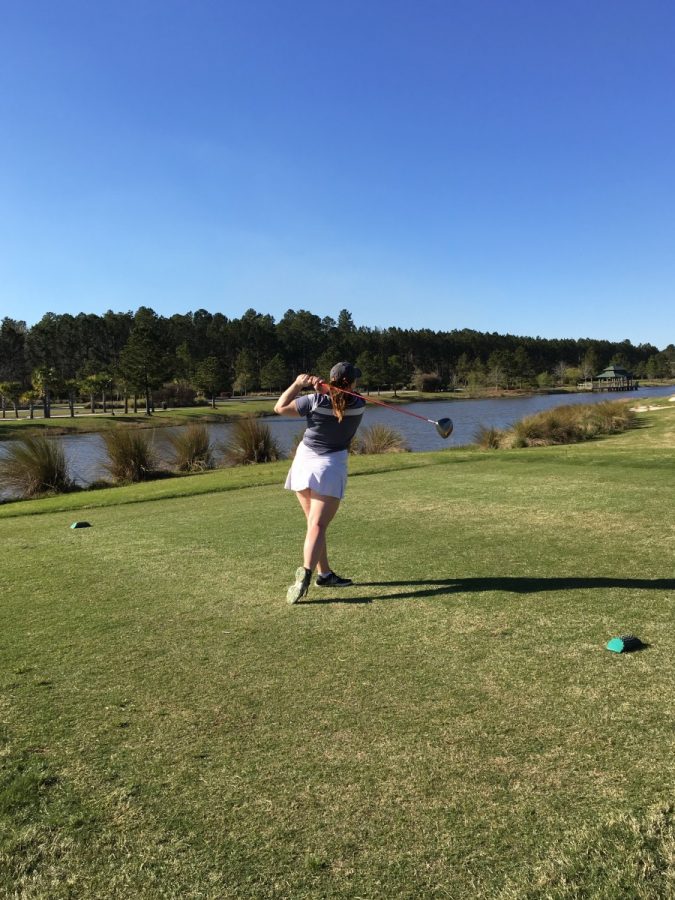 by Megan Frank, Special to The Simpsonian

With the snow finally melted and temperatures getting above freezing, it’s back to the driving range and golf course for the women of the Simpson College golf team.

The team spent their spring break under the warm, South Carolina sun while playing some rounds at the Hilton Head Lakes golf course at the Pfeiffer Invitational. Finishing eighth out of 10 teams, the Storm are still growing as a team.

“It was really fun even though we didn’t finish as well as we would have liked,” said freshman Emily Jansen. “There was some good competition, so that was good to see.”

Spring golf is still competitive, but meets are more relaxed than they are in the fall, when IIAC teams compete against each other.

“In high school, most people just play for fun, so being around a group of girls that can enjoy it, while also being competitive and taking it seriously is a huge change,” Jansen said.

This part of the season is when the women begin to fine-tune the little things and work on staying optimistic. Most players will tell you that golf is a predominantly mental game, and that it is easy for one bad hole or round to stay in your head and affect your game.

“When coaches just say go out there and have fun, it really is true,” Jansen said. “You can’t go into a match with a bad attitude, your head in another place or over-focusing on the mechanics. When you do any of those things, your score will probably be poor.”

Spending time around the team and head coach Larry Shoop, you’ll be sure to hear him say one thing—to have a smile on your face and joy in your heart. This motto has helped get the team’s mind in the right place, while also reminding them why they are playing in the first place.

In the fall, Shoop will be losing three seniors but returns No. 1 golfer, Lydia Martin. Martin led the Storm in the fall by finishing 13th individually in the IIAC tournament, leading the Storm to an overall fourth place finish. However, Martin isn’t the only player succeeding.

“On our team, anyone can beat anyone. We all have our good and bad rounds,” Jansen said. “What we’re working on right now is consistency in scores.”

The Storm will participate in four more invitationals before ending their spring season. Their final meet of the year will be at Deer Run golf course in Indianola, where Simpson will be the host.

“We feel as if we have an advantage because the course is really long and hilly, so it can take a toll on you if you aren’t ready for that,” Jansen said. “Hopefully knowing the yardages and how the greens play can help us finish the year on a high note.”