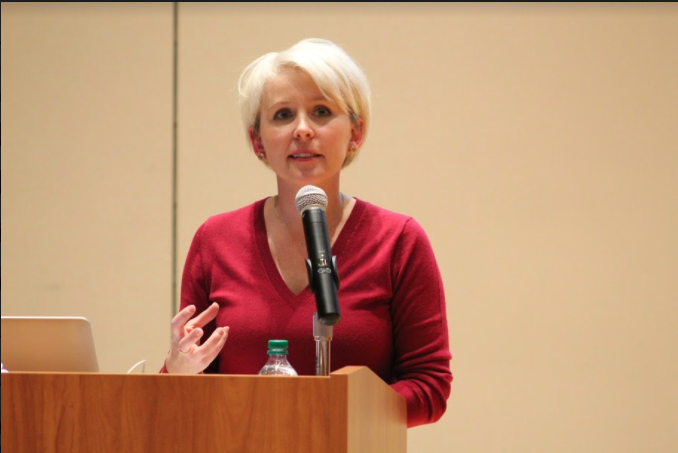 A former communications director for the Iowa Senate Republican caucus shared her journey of winning a lawsuit against the state for wrongful termination, retaliation and sexual harassment to about 25 audience members on March 29 in Lekberg Hall.

Kirsten Anderson advocates for work environments free of harassment and bullying after experiencing a toxic work environment that eventually forced her into depression and emotional instability.

“I’m on a mission to end workplace harassment and bullying in our lifetime, period. It’s as simple as that,” Anderson said.

Anderson started at the Iowa Capitol in 2008 after having a great experience working for Sen. Kit Bond in Missouri, where she said she was trusted and respected.

She expected her experience working in Iowa to be similar, but she was wrong.

Within her first year of working at the Capitol, Anderson said she experienced harassment. Her coworkers allegedly engaged in inappropriate conversations, swore at women, bullied them and created an uncomfortable work environment.

“Nothing was off limits to him,” Anderson said as she described the harassment she experienced from her coworker.

Two years into her job at the Capitol, Anderson said she complained to her boss with a female coworker about the harassment.

It worked. The harassment and bullying finally stopped but only for about two weeks. Anderson said the toxic environment got worse after that.

When Anderson heard her coworker inappropriately talking about a female Senator, she stepped up and said something to try to make it stop, only to be laughed at.

“I’ve always stood up and said, ‘Hey, come on, that’s not funny,’ and it always fell on deaf ears,” Anderson said.

The harassment continued, so she complained a second time. Still, no progress was made.

When describing how she knew her complaints didn’t matter to her boss, Anderson said, “My boss at the time actually said to me, ‘Kirsten, do you really want to come forward with this complaint?’”

Fast forward one month, and the harassment persisted, so Anderson complained for a third time. This time, the staff did something about it but received retaliation in response. Anderson said her and her coworker were singled out. Everyone knew they were the ones complaining to their boss.

After working at the Capitol for about five years, Anderson decided it was necessary to make a formal complaint. This would be her fourth and final time making a complaint to her boss that did her no good.

“On May 17, I complained to my boss for a fourth time that the workplace environment at the Capitol was terrible; it was filled with egomaniacs; it was a locker room mentality,” she said. “I wanted support and I wanted it to stop. I wanted the harassment, bullying and retaliatory behavior that I experienced to stop.”

“Rather than support me, they kicked me out the door,” she said. “I was forced out of the Iowa Senate Republican caucus staff, and I know it was wrong.”

Anderson contacted a lawyer and began the grueling process of winning a $1.75 million settlement. She said this case became her full-time job. She expended all of her time and energy into winning this case.

“I was not about to let those people that make our state laws exempt themselves from it,” Anderson said.

Anderson’s work now revolves around advocacy and bringing awareness to workplace harassment and bullying to reduce the chances of others sharing her experience.

Her first piece of advice is: see something, say something.

“You need to know, if you see someone else being harassed or bullied, it’s OK for you to intervene,” Anderson said.

Next, document everything. Anderson said this is what helped her win her case. She always wrote down when she experienced harassment or bullying, what she was wearing and who she was with, so she always had record of it.

Know the policies. Be an educated employee and know what policies in the handbook are being violated.

“If people do not know where the line is, they will continue to cross it,” Anderson said.

Be confident, and don’t be afraid to talk about workplace harassment. “Let’s keep talking about it,” she said. “The more we talk about it, the more comfortable we are. I feel like there’s a bit of a stigma with it. I want to keep the conversation going.”

Junior Jenny Mayes, an elementary education major, was impressed with Anderson’s story and her perseverance through her case.

“Amazing,” Mayes said when describing Anderson’s story. “People are strong, stronger than you think. The fact that she took that step to help someone else, not just herself, is amazing.”

The workplace should be an environment suited for people to do their best work, Anderson said, so she wants people to feel comfortable speaking up when their workplace environment isn’t living up to those standards.