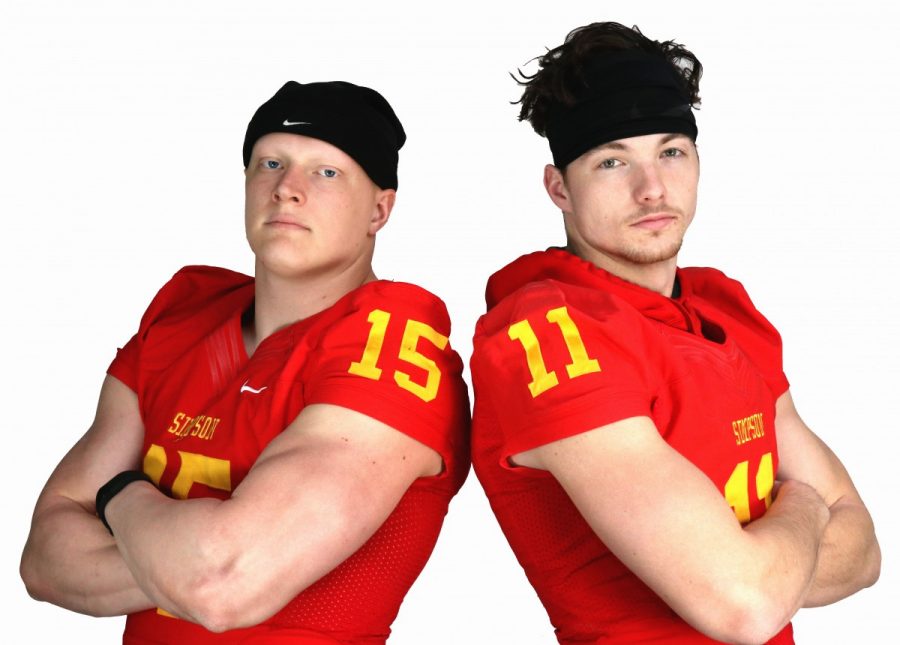 With the NFL draft nearing soon, seniors Braden Meints and Jackson Redmond have been working hard to improve their stock by taking place in tryouts for the Canadian Football League.

The CFL holds tryouts for aspiring young football players to show their skill set. With NFL scouts present, its important to perform at a high level and potentially get noticed.

Both Redmond and Meints were invited to attend a number of tryouts from one of the CFL’s regional scouts.

So far, the pair have attended two tryouts. The first took place in Oklahoma City on March 4 for the Edmonton Eskimos and the second took place just north of Dallas, Texas on March 17 for the BC Lions.

Athletes are tested in a variety of different areas including skills and drills, technique work, and other specific things the teams want to see in their programs.

“Each team has their own different way of doing things, so you get a feel for it right away,” Redmond said. “There was a lot of good competition in Dallas. It was a good experience to go against some bigger school guys.”

Both are confident on how they performed at the tryouts and felt they held their own against the competition.

“I think there was a couple times where we were definitely better than some of the other athletes,” Meints said. “We can take that back to our coaches here at Simpson who have taught us well.”

Redmond said the experience was eye opening for him in a lot of ways.

“For me personally it’s good to see where I need to grow and how far I’ve come in my time here at Simpson,” Redmond said. “I also think it’s an important to build your resume at these tryouts and sell yourself to these scouts.”

Meints said the experience was a lot of fun to be a part of, especially seeing how different they handle playing football in the South, compared to how he’s been taught in Iowa.

“You see on social media all the time about how Texas football is different,” Meints said. “Me being a smaller Iowa kid, I feel like I held my own against those bigger Texas kids.”

The next stop for Redmond and Meints was the Iowa State pro day on March 27 in Ames. To prepare for the day, both athletes ramped up their training and preparation.

The main goal for both Meints and Redmond is to increase the intensity of their workouts, increase weights, move weights faster and hopefully drop times to catch some people’s attention.

“We’re going into Iowa State’s house, so they’re going to be the centerpiece,” Redmond said. “Hopefully we’ll have a good day and be able catch one of the scout’s eyes.”

The process was not easy to get both Storm players able to attend Iowa State’s pro day. Meints said head football coach Matt Jeter and assistant coach/offensive coordinator Jeff Judge pulled some strings so they could make the trip up to Ames.

A large part of the pro day will consist of agility and strength tests like the short shuttle, long shuttle, L drill, vertical jump, bench press, 40 yard dash, and the broad jump.

Both men are set on getting their foot in the door and making their dreams become a reality.

“I’ve had the dream since I was a little,” Meints said. “I want to keep it going and this is my opportunity to solidify something going forward.”

Following their pro day in Ames, Redmond and Meints will travel to Indianapolis on April 14 for a national pro day and third CFL tryout, this one for the Ottawa Redblacks.