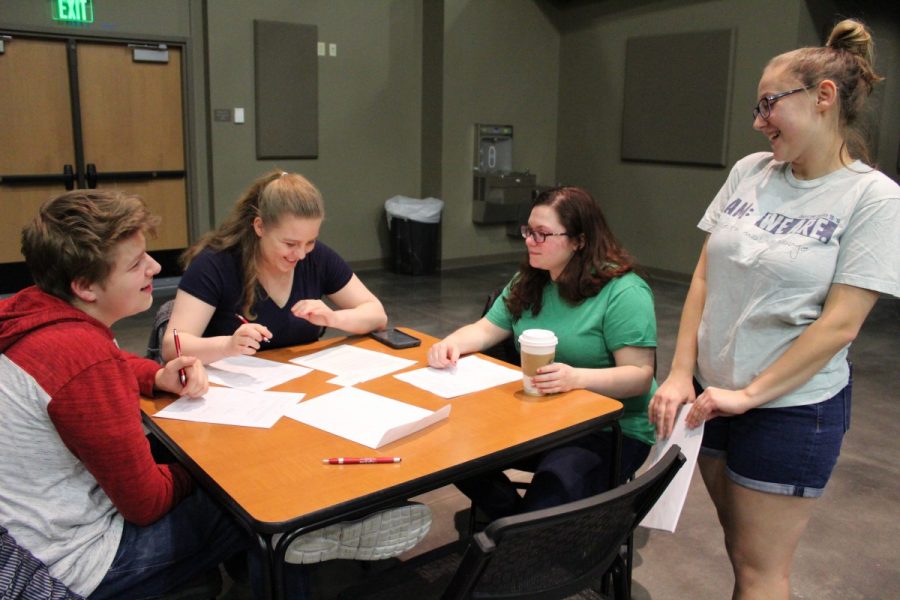 by Devon Wood, Special to The Simpsonian

Junior Rachel Hollingsworth, who’s a member of RLC, hosted the event on Wednesday evening in the Principal Black Box Theatre.

She started the event by stating that, “Fifty-one million Americans live in food insecure households.”

To start, participants broke off into groups of twos and threes and were handed a packet that included a short description of the family they belong to. This packet also contained a debit card and the family’s monthly income description.

Some families had vastly different income and expense information depending on their size.

Annemarie McCormick shared the information on her sheet, “I have a family of five, with my boyfriend and three children. I have $26.50 per week to spend on food after our medical expenses and his leg injury putting him out of work.”

She was shocked that she would have to provide for everyone on such a tight budget. “It’s so sad,” she said.

After figuring out their weekly budget, Hollingsworth told everyone they would have 20 minutes to get all of the food they needed for the week at the grocery store.

Participants were also able to use the town’s food pantry and social worker, but the location of these were kept secret because, according to Hollingsworth, “In real life, you would have to find and access these on your own without someone telling you where they are.”

While families milled around shopping, staff members acting out the other roles treated them realistically. At the food pantry, they were only allowed to get five random items for free.

Some people walked away with multiple things of jelly, while others got better-quality vegetables. Heidi Levine was the social worker for the experiments and talked about acting annoyed and shuffling papers to seem very busy.

Val Wilson, president of RLC, also participated in the activity. “I felt like we were doing something wrong,” she said, referring to when she and others were filling out the information for the social worker.

Wilson also commented during the discussion portion afterward about what it was like with such a low weekly budget. “The most difficult part was making a meal plan for a family of three,” she said, later adding, “We ate a lot of cereal and milk.”

Hollingsworth spoke more during the discussion, and others shared personal stories about having to eat on a budget at home. “Food stamps can help, but a lot of things aren’t available with food stamps like tampons, diapers and formula,” she said.

Wilson mentioned that, “If kids can’t eat, then they can’t focus or learn and they can end up on the streets.”