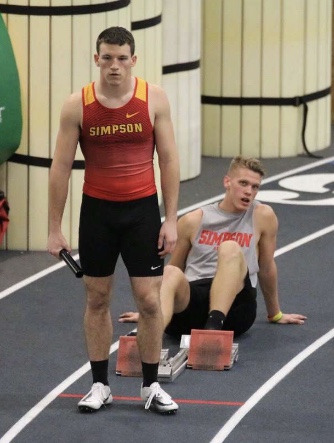 On March 10, senior Dylan Kalinay traveled to Birmingham, Alabama for the NCAA Division III Indoor Track and Field Championships to compete in the 60-meter dash and 60-meter hurdles. Seeded fifth, he found himself in the final heat for the hurdles.

“I was pretty nervous,” Kalinay said. “There’s supposed to be so much going through your head but I try to just not let it get in my head. In something like the hurdles, if you’re overthinking anything, you might just throw yourself off.”

Kalinay found that out last year at Nationals, when he placed ninth in the prelims, one spot out of the finals.

He ended up jumping six spots from his finish last season, finishing third with a time of 8.18 seconds. His finish was the top finish nationally for Simpson since 1985, when Danny Bauer and Kirk Pederson each won championships.

“I mean, you always want more if you’re not the top guy, but I’m definitely very happy with the third-place finish,” Kalinay said. “Definitely two very good dudes that beat me.”

With this finish, Kalinay is now an 11-time IIAC performer of the week, two-time All-American, owner of three separate Simpson track records and was named 2018 IIAC Track Athlete of the Year.

If you ask him about his accomplishments, you’ll get a humble response.

“Even though I have all of these accolades, it really seems weird to me that I’m making that big of an impact,” Kalinay said. “We’ve had some really good people come through this program, and it’s just hard to put into words how awesome it is to compete the way I have.”

Not only has he made an impact on the track, he’s also left an impression on his coaches and teammates.

“Honestly what’s most impressive to me is how good he is and how humble he is,” senior sprinter Emmitt Wheatley said. “Most humble human I’ve ever met, so that just adds to how much fun it is to be on his team. When he does something he’s always all in.”

During his senior year of high school at South Tama, Kalinay was originally recruited to play football at Simpson but chose to participate in track after talking with coaches. He says he owes much of his success to many different people.

“I didn’t expect any of this,” Kalinay said. “I think that it’s due to good coaching and a good workout program. It’s just like the specifics of it that I thought was really nice and I just made huge improvements.”

With Nationals wrapping up the indoor season, the last thing the senior has left in his time at Simpson is the outdoor season. He has some big goals for his final year.

“My first goal is to break my own school record in the highs, which I definitely think is doable,” Kalinay said.

Last season, Kalinay was injured for the second half of the outdoor season and missed the conference meet. This season, he hopes to stay healthy and compete for a national championship in the 110-meter hurdles.

When he leaves, Kalinay only has one hope for Simpson Track and Field.

“I really just want good athletes to keep coming through,” Kalinay said. “Just so, not only my teammates have someone to practice with, but my coaches can keep the success on both men’s and women’s sides.”

Kalinay and the Storm will travel to Pella to compete in the first outdoor meet of the season against IIAC rival Central on March 29-30.