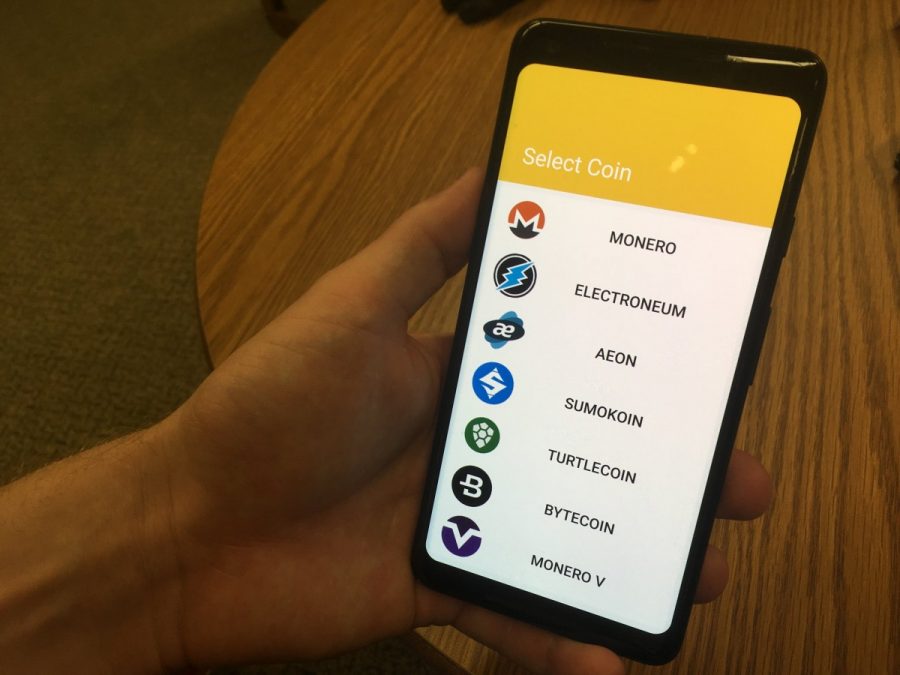 INDIANOLA, Iowa—To the average person, cryptocurrency may sound like a foreign word. However, a Simpson College student recently launched an app which will make investing in cryptocurrency as easy as logging onto Facebook.

Senior Nate Hayes said his new app, called Pickaxe, would allow users to log onto their Facebook or Google accounts and choose from seven different types of cryptocurrencies they want to earn.

After talking about Pickaxe in Simpson’s Collegiate Entrepreneurs Organization (CEO), the organization took to the idea and helped Hayes pay the fees to file it as an official company.

“They helped me go from the cool app side-project to legitimate business, which is astronomically helpful,” he said.

Hayes said he developed, designed and launched the app with the additional help of Simpson alumni Esteban Sierra and Chris Colahan, and also freshman Jeremy Risetter and senior Ruvim Novchay.

Hayes explained there are two ways for a person to invest in cryptocurrency: They can either buy it directly from the cryptocurrency market or earn it themselves through a process called “mining,” which is what the app does.

Hayes said mining cryptocurrency usually requires powerful computers which can cost upwards of $1,000. “That makes the barrier to entry getting into cryptocurrency actually really high.”

This is where Pickaxe comes in.

“A lot of people don’t have cryptocurrency wallets,” Hayes said. “So, that would make it fairly difficult for you to stick this coin anywhere.”

To solve this problem, Hayes said he and his team developed sign-in buttons to Facebook and Google so that users won’t need to have a technical understanding of which pools to mine to.

He said these buttons became available on Pickaxe after an update that took place right before spring break. Now, users are able to simply select the type of coin they want to mine and click go.

The seven types of coins available on the app are: Monero, Electroneum, Aeon, Sumokoin, Turtlecoin, Bytecoin and Monero V. He explained his app does not mine Bitcoin, perhaps the best-known cryptocurrency, because it requires much more powerful software to mine; the lesser-known coins are easier for cell phone software to handle.

To develop the basis for the app, Hayes said he used an open-source mining code for desktop computers which he found available online. He then built his own code around it to make it run on Android.

Hayes claimed the combination of his own code and the pre-existing one makes his mining app the fastest one currently available on the Android market. “I’m confident that my app is now the best experience you could do on Android,” he said.

Twelve days after launching the app, Hayes said there were about 1,500 users and, at the current exchange rate for the coins, users were earning about $2 a week.

Although the app is free to download, and does not currently run advertisements, he explained there was still potential for it to become profitable: For every 97 minutes users spend mining coins on the app, it then spends three minutes mining for him and his team.

“If we only have one user, three minutes of a cell phone is not a lot. But if we get lots of users, three minutes apiece is quite large,” Hayes said. So far, he said they have made about $4.

Right now, Hayes said the app is only available for Android users but that that could change depending on how popular the app becomes.

After he launched the app, Hayes said he then went to the website Reddit to advertise it to the world: “These coins that we allow you to mine, I went on to those subreddits and was just like ‘Hey, we just produced a new app that lets you mine this cryptocurrency on your phone. Feel free to check it out.’ And now we have 1,500 people using this.”

According to the app’s analytics, he said roughly 60 percent of its users are in the U.S., since the app is currently only available in English. However, a small percentage of users live in countries such as Germany, Argentina and India. Hayes said he hopes to eventually provide more language options for users and to market more heavily to these and other countries.

One lesson Hayes said he took away from his experience of creating and launching a company was how important it is to have a tangible prototype as opposed to just an idea.

“If I was just talking about this app to people, and didn’t actually have this on the Play store and actually developed, it would be much harder to keep moving forward,” he said. “Once you’ve got a stepping stone, it’s easier to keep going.”

In the near future, Hayes said he and his team plan on presenting Pickaxe to investors at an entrepreneurial program in Des Moines called 1 Million Cups.