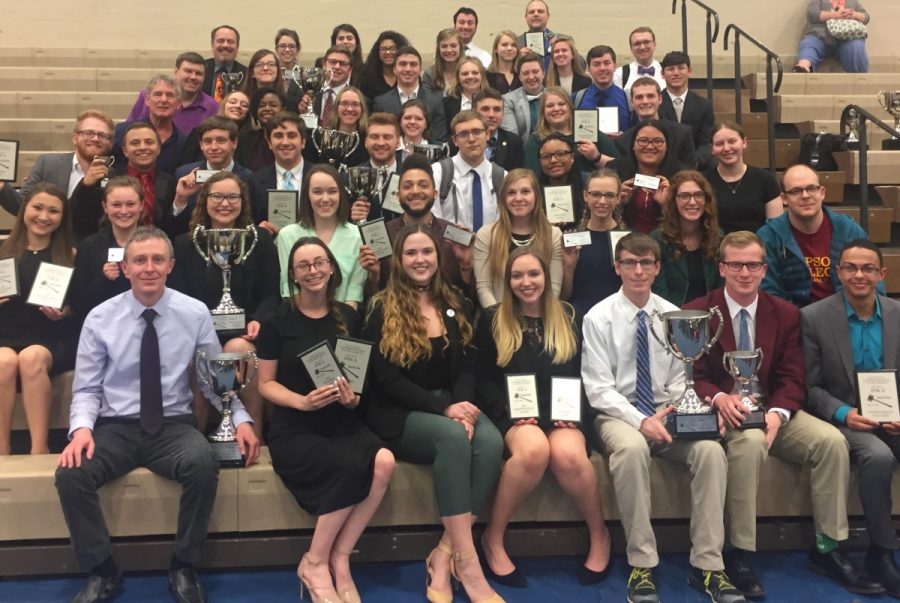 According to Spencer Waugh, director of Simpson’s speech and debate program, the team earned the most debate points out of all the schools that competed, beating the second-place finisher, Southwest Baptist University, by a margin of 129 points.

Waugh said the team went into the tournament with the goal of taking the top spot in debate points. To make that happen, he said they prepared strategically by ensuring the team had debaters entered in all of the different types of debate events.

“You can’t win debate sweepstakes by fielding 12 Public Forum teams and no Parliamentary teams,” he said.

In addition to having students entered those two debate divisions, he said he had students entered in the other divisions such as individual Parliamentary, Lincoln-Douglas, and Worlds debate, as well as Student Congress.

“All of the students in all of the divisions did well, which is why the point margin was so strong,” he said.

He said during the six preliminary rounds of debate, every team scored at least one win, while many came away with records of 3–3 or better. Waugh said all of the debate teams were well-prepared and were better-researched for this tournament than they had been for previous ones.

The team was particularly successful in Public Forum debate, where four debaters found total victory in their divisions.

Freshmen Casey Spring and Andrew Dunn won the final round of varsity Public Forum, making them the national champions for that category. Meanwhile, sophomores Erayle Amacker and Rachel Shapiro took first in the novice division of Public Forum.

Spring, who also competed in mock interview at the tournament, said she debated all four years in high school and has competed at several previous tournaments during her first year at Simpson.

“I was really determined to do well,” said Spring, a biochemistry and math major. “I was missing a lot of school for this tournament, and debate is something I really care about and put a lot of time into, so it was important to me to try my hardest.”

The tournament was the first one Amacker had ever competed in. The vocal performance and music education major said, “I learned that debate isn’t as scary as I thought. Poise and passion takes you far.”

Going into the tournament, Amacker said she hadn’t expected to take home an award.

“Throughout the rounds, I could feel myself improving with my delivery and flow, but I never thought that I had improved to the level of a national champion,” she said.

Looking to the future, Waugh said next year’s incoming group of speech and debate recruits is strong and that more students are looking to compete in Lincoln-Douglas debate. He also expects more growth in numbers on the speech team.

“If you look at the names of our award-winners at this year’s nationals, it continues to be a fairly young group of students,” said Waugh. “We’re going to miss our seniors, but it’s a fairly small group of seniors who are graduating.”