‘Spelling Bee’: When guests are part of the show 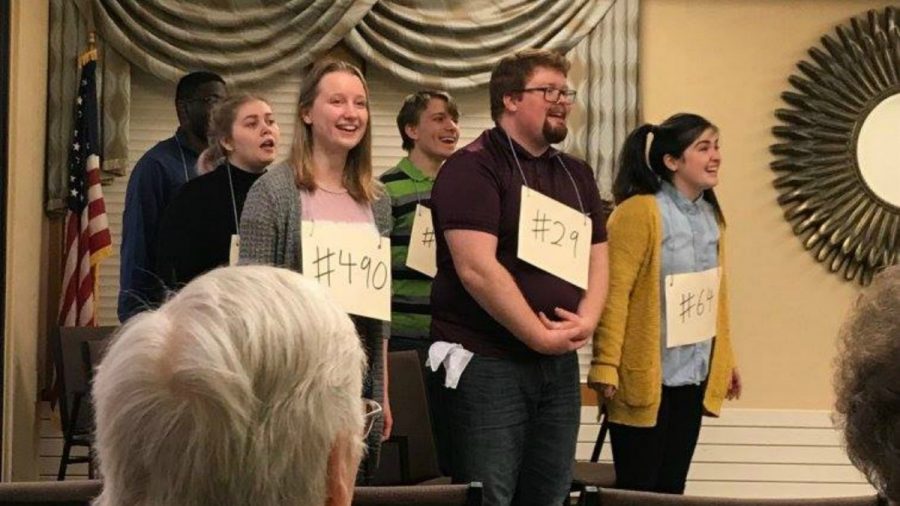 by Morgan Frideres, Special to The Simpsonian

INDIANOLA, Iowa — Simpson theater students won’t be the only actors and actresses at the upcoming show, “The 25th Annual Putnam County Spelling Bee.”

The musical is interactive, so some audience members will be asked to participate.

The production tells a story of six young teenagers all classified as “outsiders” who strive to win the spelling bee.

This show is unique because of its interaction, and Simpson Theatre only does one musical every four years, junior Cierra Clark said.

Clark’s character is Rona Lisa Peretti, who runs the spelling bee and has been hosting it for nine years. To Peretti, the bee is like her baby that she wants to be perfect.

Clark said she is excited to share all the cast’s hard work with the audience, and she thinks the audience will be able to relate to at least one character in the show.

Freshman David Robinson agreed the audience will enjoy identifying with what the characters are going through.

“As funny as it is, there is an underlying sense that being a kid is very difficult,” Robinson said. “There’s an element of reality that’s present in the characters that the audience will subconsciously relate to, even if it’s not outwardly.”

Robinson’s character is an energetic 12-year-old named Chip Tolentino, who’s a perfectionist and expects to win. This is far different from the character in his last show: an opera performance, where he played a grumpy 50-year-old man.

He said he will get to sing his first-ever solo in this production. Even in high school, he said, he had only sung in ensembles. The best part? His parents are driving from Texas to watch him perform.

His parents aren’t the only special guests for this show. Guest artist Anna Lackaff is the musical director for this production, alongside professor and show director Ann Woldt.

“Getting to collaborate with Anna has been a real joy,” Woldt said. “We have similar approaches to directing and coaching actors. It’s been a real treat having someone to talk through decisions with.”

Woldt also mentioned the incredible bond between the actors, stage managers and directors. Robinson said his favorite part of rehearsal has been the people he’s worked with.

“It’s kind of like a group project that you’re doing with your friends, and I really enjoy that,” Robinson said. “Sometimes it’s difficult, but we all help each other, so you never really have to worry that you’re on your own with this.”

The cast and crew members have put in three to four hours of work every night since rehearsals started shortly after auditions in January, so they’re ready to present their show to the world.

Even with the tough work, Clark said each performance will be different because of the audience members who are reeled in to be part of the show.

“You never know how they’re going to react,” Clark said. “There’s so many things that could go wrong or could happen, but I’m really excited to see who gets pulled up and how we react to things.”

The performance times are at 7:30 p.m. Friday and Saturday and 1 p.m. Sunday in Pote Theatre.

Simpson students and faculty can reserve a free ticket online at simpson.tix.com or stop by the box office in the Blank Performing Arts Center.