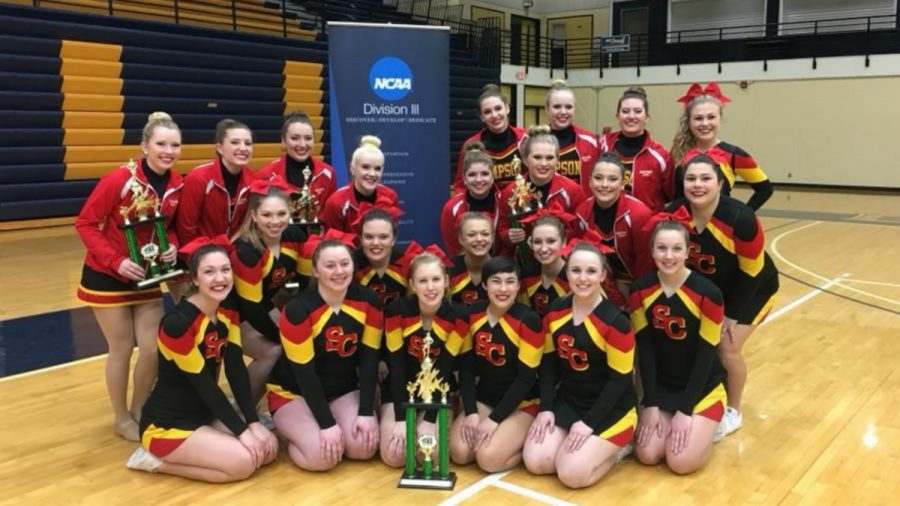 The dance team brought back a first-place finish in the hip-hop and jazz category and a second-place in the pom category. The cheer team earned a second-place trophy for their stunt routine.

“It’s a really great feeling to have done so well at a conference competition and it’s even cooler that it’s the very first time it’s ever been held,” junior dance team member Addy Boettcher said. “It feels good to do so well while representing Simpson.”

In years past, the cheer and dance squads have spent hours on routines and cheers for different sporting events, without competing or earning rewards. This year, they were given an opportunity when the Iowa Conference decided to hold a competition for the teams to show their talent and compete against each other.

Both teams were excited to have a chance to compete and put their hard work on display.

In the hip-hop category, Simpson scored a 64, the highest score of the day out of any routine. They also scored 63.33 in the jazz category and 62.67 in the pom routine.

The cheer team only participated in the stunt routine but placed high with their score of 53.5.

“I am very happy with our performance,” LoVan said. “I’m not so pleased with the events that happened afterwards with the conference.”

The team hopes that after this year’s mix-up, the conference can improve in future events.

“The conference needs to work on its professionalism especially,” junior member Emma Schlenker said. “I know a lot of our girls had competed previously and told us about how we should expect safety checks, intense spotters, a rigorous schedule, basically just a structured competition.”

“This was very lax and we pretty much had no idea what to expect. I hope the conference improves this for next year,” she said.

The next stop for the dance team is on April 4-7 in Daytona Beach, Florida, where they will compete against schools from around the country in the National Dance Association Collegiate Nationals.