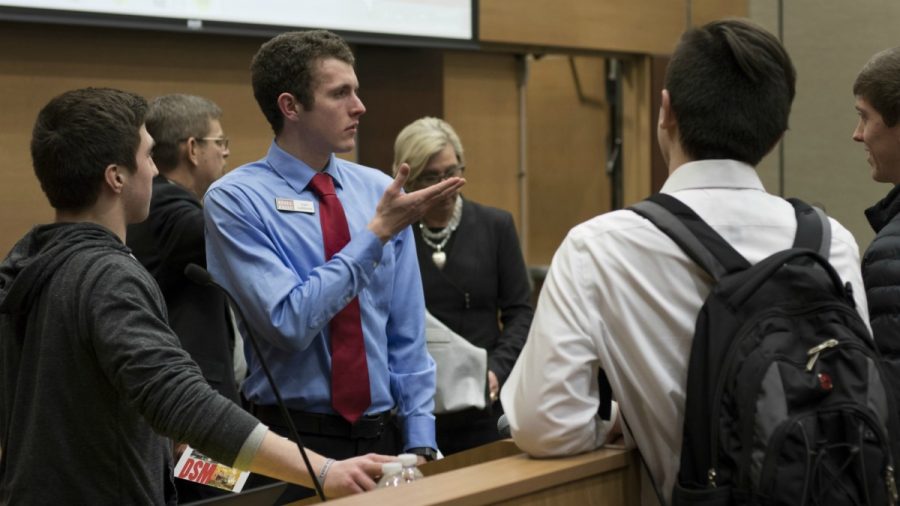 INDIANOLA, Iowa — Students had the opportunity to learn how to prepare for today’s ever-changing job market from a panel of experts who spoke at a forum event that took place Feb. 6 in Hubbell Hall.

The speakers offered insight into how both technological advances and a shift in job expectations have affected how young professionals pursue their careers. They also explained how the role of college internships has become more important in recent years.

Sullivan said Simpson’s curriculum places a strong emphasis on experiential learning, such as internships, service learning, undergraduate research and also study abroad, as a way to prepare students for their postgraduate careers, no matter their field of study.

She said about 82 percent of students from each graduating class in recent years have completed internships prior to graduation. The college’s goal is to eventually get that number to 90 or 95 percent.

Sullivan said Des Moines is a popular place for students to find internships during their undergraduate careers, while Bontrager later explained how the Des Moines metro area is also a booming job market.

“You are sitting in the fastest-growing, metropolitan community in the entire Midwest,” Bontrager told the audience. She then presented data trends that showed Des Moines is outpacing other large cities such as Omaha, Neb., Minneapolis, Kansas City, Kan., Milwaukee, St. Louis and Chicago in terms of population growth, gross domestic product and employment.

Des Moines’ economic growth, as well as its relatively affordable cost of living, appealed to junior Logan Egeland. “That’s definitely something I’m looking for as someone that’s coming out of college,” Egeland said. “I want a place that’s affordable to live where I can find a job.”

Egeland, who plans on attending graduate school, said he eventually wants to become an athletic director and teach coaching classes. While he would be willing to move out of state, depending on where jobs are available, he said he prefers to stay in Iowa.

She said just under 62 percent of adults have completed postsecondary education, and about 73 percent have yet to finish their education.

While Bontrager seemed hopeful about job and education prospects for students in Iowa, she did point out the impact technological advances have had in replacing human workers. Citing a video titled “Working Nation: Slope of the Curve,” she said in the next 20 years, it’s predicted that technology will replace over 40 percent of all jobs.

“It’s created a higher demand for jobs,” she said, speaking of technology. “It’s just a matter of making sure everyone’s prepared for those jobs. So, it’s going to create tremendous, tremendous opportunity for us.”

Sullivan said jobs which require repetitive skills, such as in fast food and retail, are most at risk of being automated. Meanwhile, demand for jobs requiring a high degree of human interaction, such as in the health care industry, will likely increase.

Sullivan explained how many companies use computerized screening tools which perform keyword matches on job candidates’ application materials to see if they meet the minimum job qualifications or have the desired skills the company wants.

“There’s an algorithm that will screen, and it will select the top candidates before they move into those initial interview rounds,” said Sullivan. She said this process makes it especially important that job seekers tailor their materials to the specific job and not send the same resume and cover letter to multiple employers.

Another point the speakers address was the trend of more and more workers switching careers throughout their lifetime.

“It’s rare that you find someone who will find a career right out of high school or college and stick with that through to retirement,” said Gieseke, who works with adult students who enroll at Simpson to either finish their undergraduate degrees or take an online, graduate-level program.

Sullivan said, statistically, college graduates change jobs an average of four times during their first 10 years after college. “That’s telling us that we do, as an age group and as a population, have to be more agile, more flexible, more willing to learn, more innovative, more creative.”

Given these trends, Bontrager advised students to develop as many transferable skills as possible and also to be willing to learn new skills as their jobs require. Even if they don’t get the job they desire at first, she said they should focus on making the most of it to prepare them for the job they really want.

Or as she put it, “Have the eye up ahead, but be present in the job you’re in today.”

Marilyn Lawson, an Indianola resident and member of the American Association of University Women, which sponsored the forum along with the Culver Center, explained how she had to adapt to different careers throughout her life.

Originally a high school English teacher, Lawson said she quit after having children. However, she was able to use the communication skills she developed as a teacher to eventually find career in the insurance industry, a career which spanned 40 years.

Lawson said the ability to be flexible, “opens all kinds of doors.” She also cautioned students against missing out on opportunities that come their way.

“Don’t ever pass by an opportunity because you might not get it again,” she said.