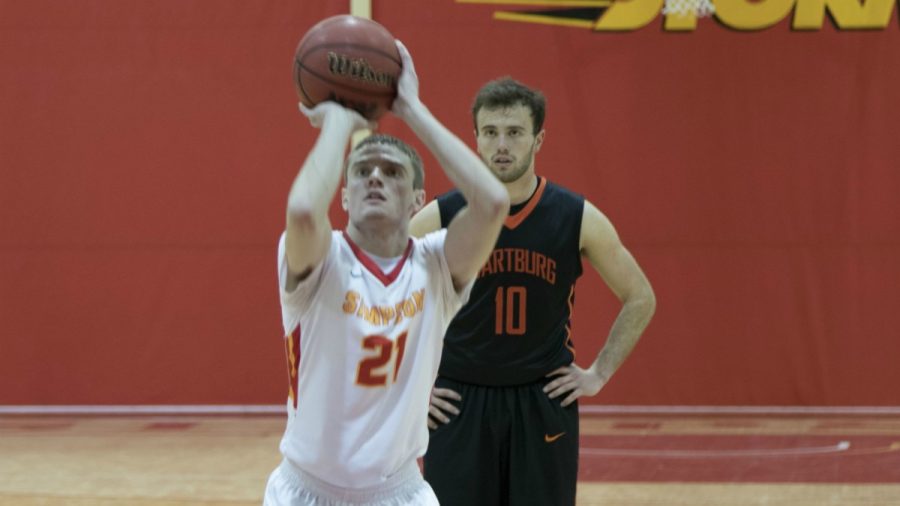 INDIANOLA, Iowa — After a tough nonconference schedule and some early conference losses, the Simpson men’s basketball team seems to have found their groove. The Storm are now 9-7 (5-3 in IIAC) after falling to Central, ending their winning streak to six games — the longest streak since 2003.

“Our guys don’t really talk about the winning streak,” head coach Brad Bjorkgren said. “As coaches, we always say, ‘One game at a time,’ but it’s the players who have to believe that. Our guys really truly believe in one game at a time.”

After beating No. 21 Wartburg last week, Simpson sat near the top of the Iowa Conference standings and hadn’t lost a conference game since Dec. 2, when the Storm lost a close game to Nebraska Wesleyan.

“I think it attributes to us practicing better,” Bjorkgren said. “I’m a big believer in practice. I think they’ve made more of an effort in practice and it’s showing up in games.”

Outside of Riordan and the starters, the Storm have also been getting some help from players off the bench. Junior John Barbee scored 12 against Wartburg and sophomores Kyle Wagner and Aaron Hauser have played some big minutes.

“I’ve always been confident in our bench,” Bjorkgren said. “I didn’t think they were playing as well as I thought they were capable of, but it seems like they’re kind of picking up the slack a little bit. I think we have some good guys off the bench that can contribute in many different ways.”

Outside of Amsbaugh and Riordan, the Storm are relatively balanced between scorers. Riordan thinks selflessness from his teammates is the key to winning games.

“We really don’t care who scores,” Riordan said. “We have so many talented players offensively so many people can step up in different spots. Everyone is capable of scoring so we trust each other enough to get each other the ball when they’re open.”
“Everybody’s established roles,” Bjorkgren said. “Not only have they established roles, they’re embracing their roles. When you embrace them you have a chance to be successful.”

While the winning streak is exactly what the Storm needed, Bjorkgren says his team can’t become complacent.

“We can’t slap each other on the back and think we’ve got this figured out,” Bjorkgren said. “We’re not to that point yet in our program. We have to keep getting better and I think our guys are understanding that.”

The Storm traveled to Pella on Wednesday to take on Central. Despite 18 points from Riordan, the Storm lost to the Dutch by a final score of 93-87.

The Storm travel to Storm Lake for a rematch against league-leading Buena Vista on Saturday.