Riordan starts season off strong, steps up for Storm 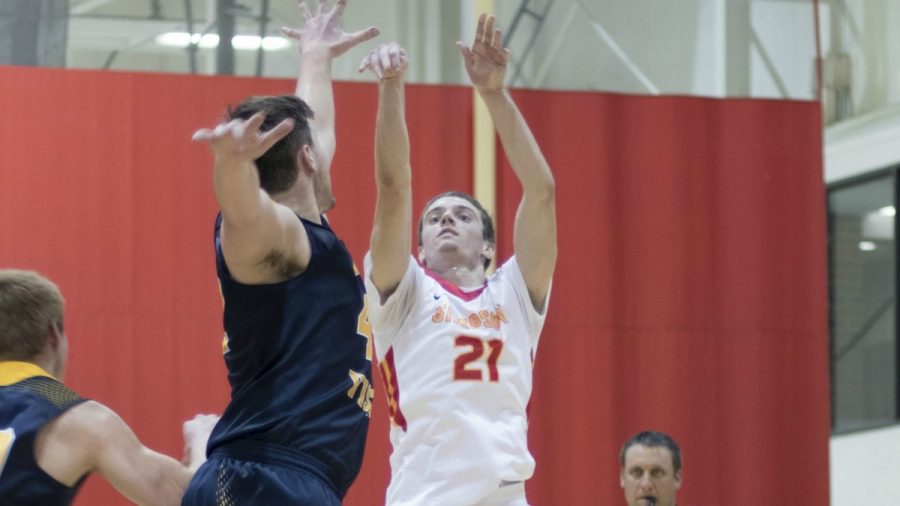 INDIANOLA, Iowa — Many players have contributed to the efforts of the Simpson men’s basketball team so far, but sophomore guard Conor Riordan has been a consistent standout.

As a freshman last season, Riordan saw action as a player who came off the bench for the Storm. This year, the starting point guard is averaging 17 points and four rebounds per game, while shooting 48 percent from the field and 42 percent behind the arc.

“I’m just trying to be aggressive,” Riordan said. “Losing a bunch of guys last year and having a new group, I’m looking to lead the team this year.”

After seven games, Simpson sits on a 2-5 record. The Storm started the year going 2-1 but have since lost four straight. Three of the losses were by 9 points or less.

“I think we’re getting better,” Riordan said. “We’ve had a really tough schedule and played some really good competition. I think our record doesn’t show how good our team is. We’ll be a lot better at the end of the year.”

Now in his second year for Simpson, Riordan has upped his game and worked hard this past offseason.

“I definitely worked on my shooting capabilities,” Riordan said. “I just want to be a more consistent shooter. Also, coming off ball-screens because that’s a big part of our offense.”

Riordan, who’s majoring in math and minoring in secondary education, said leadership is a quality he’s trying to incorporate into practice and games.

“I’m continuing to develop into a leader,” Riordan said. “As a point guard, you’re kind of looked at as a leader, but just getting more comfortable with the guys and making sure we’re ready to go every game.”

The other workhorse for the Storm so far has been senior forward Sam Amsbaugh. Amsbaugh is a returning first-team all-conference player who’s averaged 20 points, seven rebounds and three assists through the early season. Riordan has worked well with Amsbaugh.

“I think he does a really good job of finding me on open cuts or when a double team comes,” Riordan said. “I like our pick and roll. We’ve got a good teammate game and it’s really developed into a good connection on the court.”

Amsbaugh has nothing but praise for Riordan’s game.

“He’s been shooting the three very well and I think that makes the pick and roll or pick and pop game really hard for teams to guard,” Amsbaugh said. “He’s one of our best defenders and has really stepped up as a leader of the team as a sophomore, which is huge.”

Simpson’s rocky start hasn’t been due to a lack of points. The Storm have averaged 76.4 points per game. Riordan says the team has a few improvements to make to start putting some wins together.

“I think we just have to get better defensively,” Riordan said. “We need to be more consistent and get stops. We’re very skilled offensively and we’ll be able to score with the best teams, but defense is where we’re going to step up and win games.”