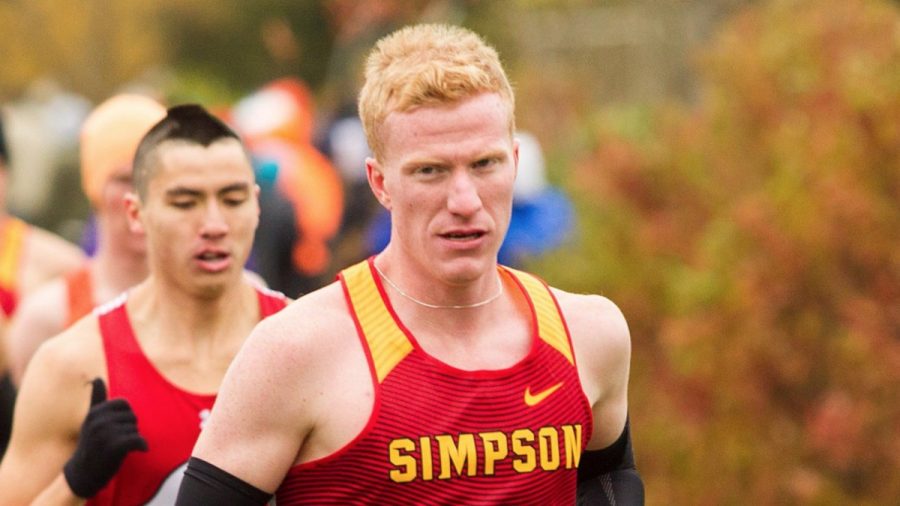 INDIANOLA, Iowa — The Simpson men’s cross country team had another strong showing this year. The Storm finished fifth in the Iowa Conference, had two all-conference runners and sent one athlete to nationals at Principia College in Illinois on Nov. 18. At the forefront of the success was senior Ian McKenzie.

During this season, McKenzie was named IIAC performer of the week, was awarded all-conference honors and earned a trip to nationals. McKenzie ran the race in a time of 25 minutes, 43 seconds, placing 140th out of 279.

“It definitely meant a lot to myself and my family,” McKenzie said. “Making all the miles and the time commitment worth it to be on that stage. I was there as an individual, but I ran for my teammates, my coach and my family.”

This was the first time that a runner from Simpson made it to nationals since 2012 and was the best finish since 1995 when Matt Chance placed 136th. Head Coach Heath Moenck was pleased that Simpson sent a runner to nationals.

“It was great that we had someone getting back and representing Simpson,” Moenck said. “It proves that we can have elite runners here. He’s worked really hard, and we’ve done a good job developing him to get him to that caliber.”

McKenzie graduated from Dowling Catholic High School, where he ran on a cross country team that qualified for a national meet. He decided to come to Simpson after taking a visit. McKenzie, who is an environmental science major, also had multiple relatives who participated in athletics at Simpson who played a role in his decision.

“There’s a successful tradition at Simpson, and I wanted to be a part of it,” McKenzie said.

McKenzie’s high school success didn’t transfer over right away in college. As a freshman, he placed 119th in Regionals and 29th at conferences. But in his four years at Simpson, the senior improved his 8K time by over two minutes. This helped him place 20th at the regional meet and 13th at the conference meet this season.

“Mileage is a big thing that has been increased over my four years, and that’s how I’ve gotten better,” McKenzie said. “I put a lot more time on my feet. Harder workouts and longer workouts. Just building on past years. You know, doing things better and learning from past experiences.”

McKenzie said he improved more mentally than physically in his time at Simpson.

“It really was a mindset,” McKenzie said. “Because running is such a mental sport. You really have got to have that mindset, and it’s got to be sharp during the whole race. I feel like that’s really what I’ve figured out.”

Moenck said his team will miss McKenzie and reflected on what he’s done for the Storm.

“For as good of a runner as Ian is, we’re going to miss more of his leadership,” Moenck said. “He has led the life of a runner every day, and he’s a great example for younger runners. He proved that you can enjoy the sport. He cares about Simpson College cross country a lot, and he’s shown that through years of dedication.”