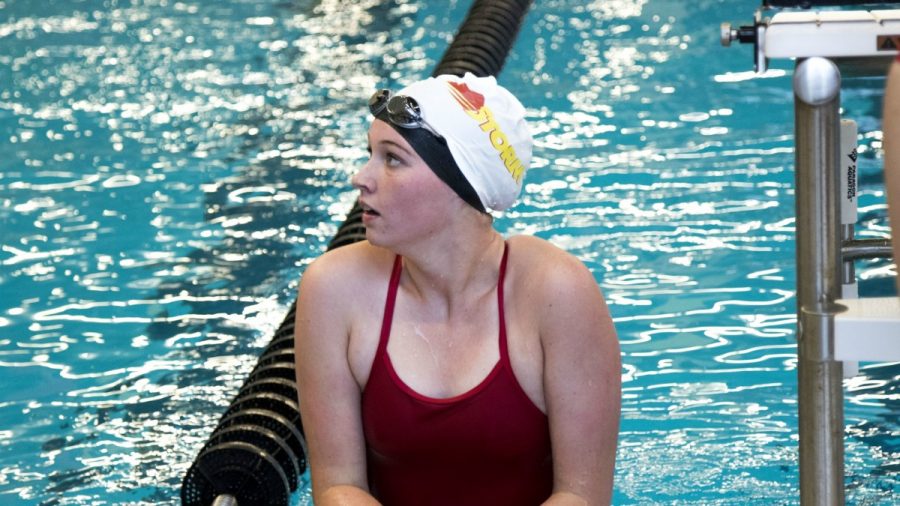 INDIANOLA, Iowa — Diving into the new season, head swim coach Tom Caccia and the Simpson swim team are off to the races.

After a competitive season last year, Caccia did his research over the offseason to ensure he knew how each swimmer would fit into the team and make the biggest impact. Finding each swimmer’s niche was the biggest challenge, but that didn’t stop Caccia.

“I want everyone to understand that this is an equal sort of thing,” Caccia said. “Like with football, certain teams do not have their names on the back of the jersey.”

Looking to build on what he accomplished with the team last season, Caccia has high expectations moving forward.

“We’re ahead of where we were a year ago, and that is good to see,” Caccia said.

Even with many new swimmers joining the squad this season, Caccia and the upperclassmen still expect everyone to play a role in improving the team and cutting time in their races.

With only three sophomore men returning to the team, and no swimmers above them, the team has struggled to compete with most schools in meets because each swimmer can only compete in a handful of events.

Because they are so young, the freshmen who joined this season are being given opportunities they otherwise wouldn’t have. From attitude and leadership to action in and out of the water, the youngest class has already begun making an impact on the swim team.

While there are new faces on the squad, the swim team has been improving overall since last year.

“The improvements we have seen are the recruits we are attracting in,” Caccia said. “Fortunately, the freshman we have brought in are all talented people that are involved in academics and other school activities.”

Compared to past seasons, the team is along a rebuilding path that it hasn’t been on recently.

With rebuilding comes pressure for the younger swimmers to perform and earn points for the team.

“Our head coach has been around and knows the ropes when it comes to swimming,” said Megan Buitendorp, a senior on the team. “He is good at distinguishing what we need to focus on individually and tailors workouts to that. He isn’t afraid to correct you and help you with your stroke so you can become the best swimmer possible.”

Practice can be hard work for the young athletes who just finished their high school careers and are entering the longer college season. Swimmers in high school generally prepare for 10 to 13 meets, depending on the school. Collegiate swimmers usually compete in 20 to 25 swim events each season. Without a serious change in preparation in practice, freshman often struggle to keep up.

This year’s team has increased the mileage in practice, trying to reach 1,000 yards each practice in a shorter amount of time.

“I think practice has been going well,” Buitendorp said. “We are way ahead in our training then we have been my previous three years. I also think we get the motivation to push ourselves through teammates and wanting to get better and better.”

Swim coaches often increase sets by pushing swimmers to cut time or do more distance. Swimming 1,000 yards in practice has taken around 20 minutes for the Storm in the past. Coach Caccia has upped the ante and cut the time to 17 minutes for the same distance in order to challenge the team and push the swimmers to their limits.

Like most sports, the training it takes to get into mid-season shape is hard, but staying in that shape and continuing to practice just as hard is tough for all athletes. Continued training and conditioning often leads to soreness, which can lead to injury.

“We are in that part of the season where we are getting into the dog days of the year,” Caccia said.

A major culture change happening on the team. The swimmers know it, the coaches know it and the way they’ve practiced is showing that.

Another goal for the team has to do with academics, not outcomes in the pool. The goal is simple – to finish with a 3.0 GPA as a team. This would mean they could keep the academic, all-American status the team has earned for multiple consecutive seasons.

The men and women travel to Grinnell for their next swim competition on Dec. 1 and Dec. 2.