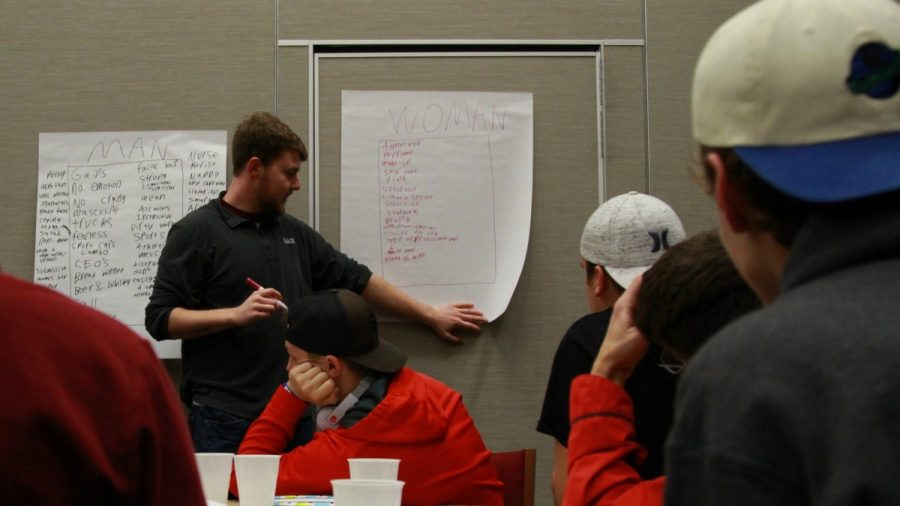 INDIANOLA, Iowa — Simpson’s male Sexual Assault Response Advocates (SARA) held a discussion on Nov. 2 asking participants what it means to be a man.

Senior Tristan Carman, who is the president of SARA, said in his opening remarks that the purpose of the event was to have a guy-to-guy conversation about being a man. This included ways men can benefit from healthy masculinity as well as how they are affected and can perpetuate toxic masculinity.

About 35 male students, staff and faculty attended the Dude 101 session, which took place in Hubbell Hall.

Participants broke into groups and brainstormed qualities society typically expects men and women to fulfill. On large pieces of paper taped to the walls, the groups drew a box for men and a box for women and then listed the qualities inside them. Outside the boxes, they wrote down qualities that usually fall outside of society’s expectations.

The groups also noted the different careers society usually expects for men and women to take.
Careers for men tended to be either high-paying or physical in nature, such as law enforcement, construction or business CEOs. In contrast, examples of careers for women were librarians, teachers, nurses or stay-at-home moms.

After the groups finished the exercise, they discussed the results as a group.

To junior Ben Rockhold, the exercise was eye-opening.

“You look at those things and you see that, because they’re on the outside of the man box, they’re kind of looked down on,” Rockhold said. “And it kind of makes you feel: How do people see me, then, if I fit those characteristics?”

Senior Robert King, who is a SARA, said he has done this exercise many times previously yet always sees different traits being listed inside and outside the boxes.

“Regardless of what qualities or traits or things that you like, it doesn’t really matter,” King said. “You can still be a man or a woman or whatever your gender identity. But oftentimes, society pushes us into these boxes and doesn’t let us break out and that leads to larger issues in our culture.”

Despite growing up with a single mother, King said he was still taught to do things that men are expected to do, such as taking out the trash and opening doors for women.

Junior Sam McCauley was also raised by a single mother and said that has influenced his outlook on gender roles. To him, the gender of who was raising him was not what was important.

“Support is support,” McCauley said. “It doesn’t matter who it comes from.”

When asked where gender stereotypes are most present in everyday life, many of the groups said they abound in media such as advertisements, movies, television and music.

Groups also focused on male sexuality and how it relates to sexual assault and harassment. The groups dissected how stereotypes of masculinity and gender roles reinforce the culture that produces and excuses sexual misconduct.

King said the fact men are told to be dominant and persistent and that they should want to have sex pushes them into a box in order to fit in with what they see as normal male behavior.

“Granted, this doesn’t justify what’s happening, but this is the problem,” he said.

Senior Will Seiler said how, in individual cases of assault, other men tend to think of perpetrators as fitting a certain mold that falls outside of the stereotypical man box.

“The bitter reality of it is that anyone in this room is capable of committing sexual assault,” Seiler said. “It’s not like you fit a rigid mold of a person who’s capable of doing this. We’re all human, and so it’s always within the realm of possibility. It’s not an abstract, ‘This person’s a sexual assaulter.’ We are sexual assaulters if we allow ourselves to be.”

To combat sexual assault, the groups said keeping the conversation about it alive is key, as is actively calling out toxic gender stereotypes that reinforce sexual assault.

Seth Andersen, director of the John C. Culver Public Policy Center, also suggested the need for a basic conversation about sexuality given how American culture is, at once, both sexually repressive and exploitative.

“At the same time, we can’t seem to have an honest discussion about the natural, biological, completely appropriate human sexual response,” Andersen said. “And so, I think that’s a huge part of the problem here.”

Carman said he was happy with the event’s turnout and hoped the men who came did not view it as an attack on men but rather a discussion opportunity.

Tim Palese, another SARA, said he hoped the activity would get participants to look at their own lives differently and question the effects of popular media portrayals of masculinity.

In the spring, the SARAs hope to hold a similar event that would also include women in order to have a unified conversation about masculinity and how it affects men and women.