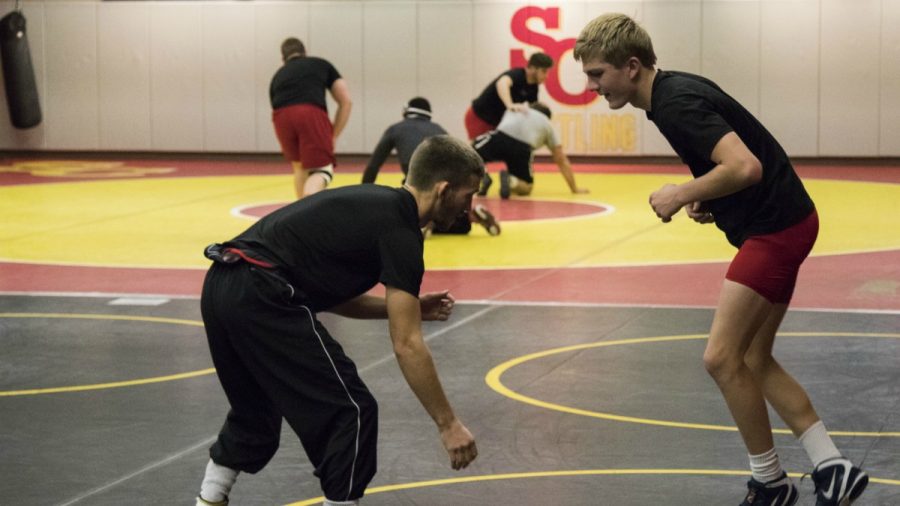 John Gioffredi, a junior from Indianola, earned his second pin of the season against Graceland on Wednesday, proving to be a leading force on the Storm. Simpson was picked to finish seventh in the IIAC in the first-ever preseason coaches’ poll. (Photo: Austin Hronich/The Simpsonian)

INDIANOLA, Iowa — When asked about his Storm wrestling team’s goals for the season, head coach Nate Hansen had a solid five-word answer.

The Storm already had their first meet of the year in Hopper Gymnasium against 17th-ranked Cornell. Simpson fell 30-16 to a talented Rams team, but Hansen did find some positives in the loss.

“It’s a good measuring stick,” Hansen said. “I think we know we can improve from that start point. We’re going to have some guys that continue to get better every day, and that’s our goal.”

Simpson earned wins from a pair of juniors John Gioffredi at 133 pounds and DeVaughn Scott at 197 pounds.

Gioffredi, originally from Indianola, transferred from Grand View. Scott had a strong outing last year before an injury ended his 15-7 season.

Both were wrestlers who Hansen mentioned to be on the lookout to make an impact this season.

“We’ve got a couple individuals that are going to be strong front-runners,” Hansen said. “John Gioffredi is a transfer from Grand View, and he’s looking good so far this year. Noah Robinson at 184 and DC Scott at 197 are some guys that definitely have the NCAA championships in their sights.”

Hansen also mentioned 141-pound senior Zach Johnston, who was on pace for a strong year last season before it was cut short to injury.

Johnston is one of the only two seniors on the roster. The other is Dalton Kenig, who will wrestle at 165 pounds this season.

Another goal for the team is to send a wrestler to the NCAA tournament.

“That’s been the challenge,” Hansen said. “You have to be top three in the region. We added some more teams to the region this year, but NCAA wrestling really measures the season based on the end of the year and the NCAA tournament.”

In his sixth year, Hansen is still looking to send his first wrestler to the NCAA tournament this season. Last year, Simpson was close with two wrestlers finishing in fourth place, one spot shy of qualifying.

The Storm were picked to finish seventh in the IIAC ahead of Buena Vista and Nebraska Wesleyan in the first-ever preseason coaches’ poll.

Hansen is focused on making improvements, and his team is working hard in practice to make those improvements.

“How we’re training and how we’re drilling,” Hansen said. “Just coming in here with a great effort every day, and we’ve got to do the little things right.”

Hansen has high expectations for Scott and Gioffredi to lead the team on and off the mat.

The Storm’s next meet is at Luther on Saturday starting at 9 a.m.