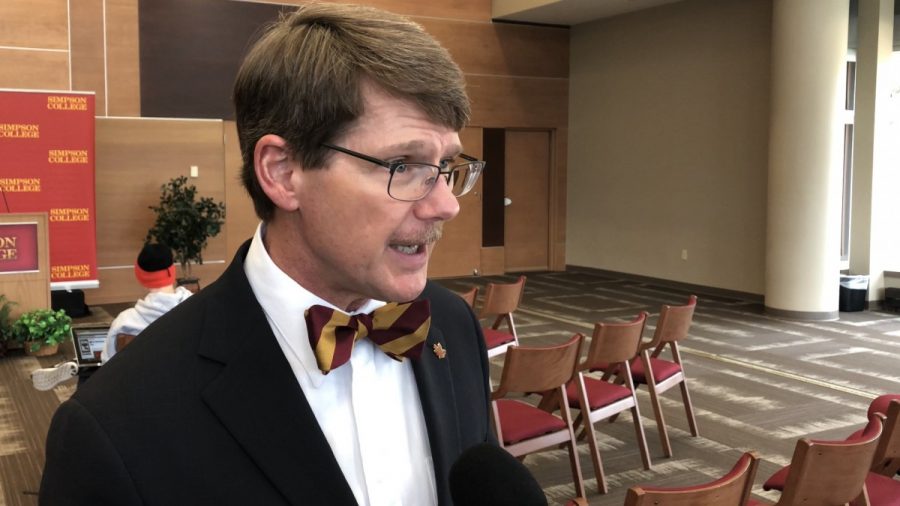 It’s called The Simpson Promise, and it will start in fall 2018. President Jay Simmons said it will cover the full cost of a first-year student’s tuition as long as they:

– Are an Iowa resident
– Submit the federal financial aid forms no later than July 1, 2018
– Are eligible for financial aid
– Live on campus
– Have a 2016 household adjusted gross income $60,000 or below
– Be accepted as a full-time incoming first-year student

“There has been a lot of talk about making college affordable. We decided it was time to take action,” Simmons said in a Monday email to students. “We expect our students to become leaders, and they do. So it makes sense that Simpson is taking a leadership role in this critically important area.”

Families are often deterred by Simpson’s tuition sticker price of more than $37,000. The purpose of this initiative is to make a Simpson education accessible for more Iowa families, according to a news release. A news conference was scheduled for 1 p.m. Monday in Hubbell Hall.

“We talked to a single mother who broke down in tears when she realized her daughter would now be able to attend Simpson,” Simmons said. “That should tell you why we’re all so excited about the potential of The Simpson Promise.”

Students benefiting from the scholarship will still be responsible for paying room, board and fees, which Simpson said is comparable to the three state universities in Iowa, as well as other private institutions.

The Promise also doesn’t account for changes in tuition prices for following years, which continue to increase. The board of trustees already approved a 4.16 percent increase in the comprehensive cost of attending Simpson, from $45,626 during the 2017-2018 academic to $47,524 for the 2018-2019 academic year.

But with the announcement of the closure of the Ankeny campus a week ago and faculty taking furlough days to offset the decline in enrollment, students are left wondering how The Simpson Promise will be funded.

Simmons said the program will be “revenue neutral” because the funding for these students will come from the $85 million endowment the school receives every year. Since students eligible for The Simpson Promise would have to apply for federal financial aid, the school would not charge them for tuition beyond what federal Pell grants and Iowa tuition grants would cover.

“If we have something like 18 to 20 students in this income range that we did not have this fall, the program more than pays for itself,” Simmons said. “Even though, on an individual basis those students will be paying less to attend Simpson College.”

Students already enrolled at Simpson are not eligible for The Simpson Promise, though many fit the criteria. Sophomore Bekah Brainard would have qualified for the program when she was applying to colleges.

The median household income in Iowa, according to the Iowa Data Center, was about $54,000 in 2015, below the $60,000 requirement for the program. Based on previous records of enrollment, this includes anywhere from 25-40 percent of incoming classes, about 100-150 students annually.

“We’re hoping this is such a success that we would never walk away from it,” Simmons said.