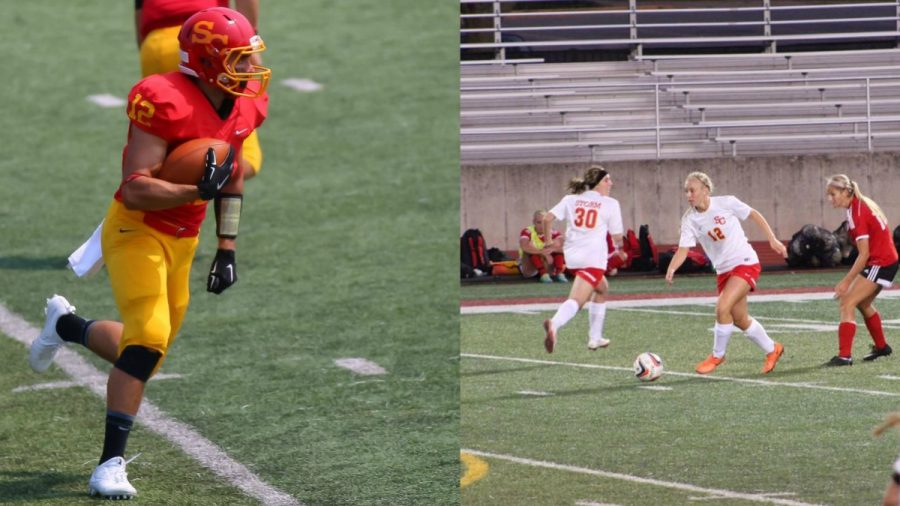 INDIANOLA, Iowa — In sports, nothing is worse to some athletes than sitting out with an injury.

Senior Davey Jergens and sophomore Taylor Sudmann know this all too well. Both athletes missed the remainder of last season with ACL tears.

Jergens, an athlete who participates in both track and football, missed significant time after tearing his ACL on a kick return last year at Wartburg.

“I was returning a kickoff and I made a cut and a guy came down and put his helmet on the outside of my knee,” Jergens said. “Right then I knew. It was the worst pain I’ve ever felt in my life.”

In 2015, Jergens was named First-Team All-Conference as a kick returner and was a member of the 4×100 team that set the outdoor record for Simpson. But he was forced to sit out for almost all the 2016 season in both sports after his surgery in November.

“After surgery it was rough but I tried to get after it right away,” Jergens said. “Every day I went to the weight room for three hours. I rehabbed and worked out. The thought of coming back to football just kept me going.”

That time spent rehabbing and working eventually paid off for Jergens, as doctors said he was ahead of schedule. But six months is the cutoff time for an ACL injury and the doctors weren’t going to clear him early.

Now, Jergens is healthy and cleared to play. He is one of the Storm’s kickoff returners and works as a running back in certain situations. After his 2015 season, the senior was anxious for his return.

“I was really looking forward to this year being my year,” Jergens said. “But coming back from an ACL injury, you’re not the same athlete as you were before. So I’ve been working on full speed cuts and that’s really why I’ve only been doing kickoff return.”

Just like Jergens, Sudmann was injured in the fall 2016. Sudmann plays forward for the women’s soccer team and tore her ACL against Grinnell.

“I was near the goal line,” Sudmann said. “I was going to cut back and my body was going to the right and a girl came and hit me from another direction. That caused my body to go left and my knee kept going right.”

Sudmann said at first the pain was intense, but she was able to walk and run on the injury as the pain became more tolerable. She had surgery in September.

Rehab was going well for Sudmann until she found out the injury became infected. The doctors performed another surgery to clean out the infection. From there they put in a pick-line, which helps with getting medicine where it needs to go.

“The line goes to the vein above my heart,” Sudmann said. “There was a huge patch on my arm that I had to inject medicine into daily so that it cleaned out my system. I had to do that here at college and that was not fun.”

Despite the second surgery, Sudmann didn’t miss much time in her rehab plan. The sophomore was still cleared around the six-month mark. She didn’t go full contact until nine months though because she didn’t want to wear a hefty knee brace.

“I would do little things but I wouldn’t do full contact or tons of pivoting,” Sudmann said. “I waited nine months to get back into that. This year I cut and pivot and I don’t even think twice.”

This year, Sudmann has scored three goals in 13 games and is making her impact on the varsity team. She says she appreciates being able to play soccer.

Two athletes who experienced the same injury are back and contributing to their teams. Jergens has advice for those going through a tough injury today.

“Just keep going,” Jergens said. “I promise it will get better.”