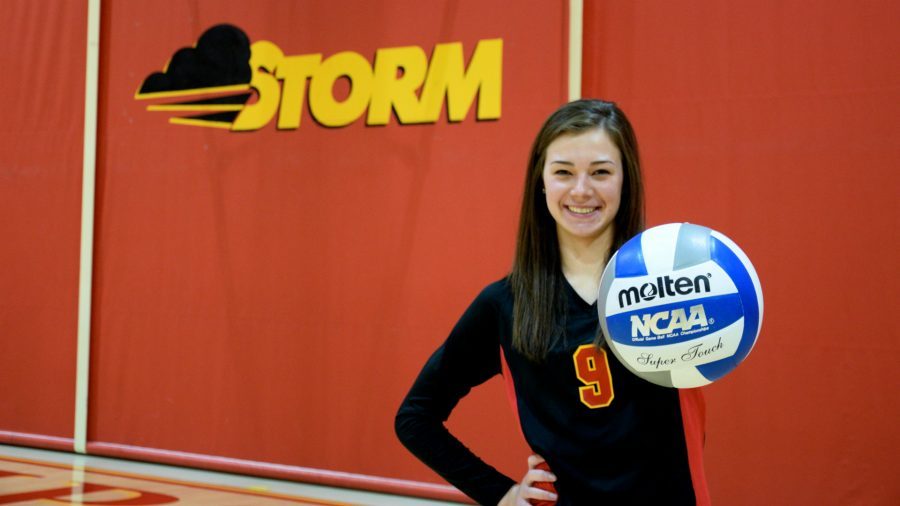 INDIANOLA, Iowa — Only 16 athletes have reached 1,000 career kills for the Storm volleyball team. The latest name on that list: Jacque Luth.

The senior outside hitter has been on a steady pace toward reaching this milestone since her sophomore year. Entering her junior season with 488 career kills, Luth continued her success into her last two seasons for the Storm and has surpassed her own expectations.

“I have continued to increase expectations of myself and bring my experience and IQ to the court,” Luth said, “I know I can always get better, so I continue to make mini goals during practice to improve something every time I’m on the court. I do my best to anchor the team during competition so my teammates know we can perform even under pressure.”

Storm volleyball currently sits near the bottom of the IIAC with a record of just 7-12 (1-4 in IIAC), but that hasn’t stopped Luth and her teammates from digging in and fighting for wins.

In her 19th season as head coach, Lana Smith said Luth is a special player. One that is hard to come by.

“It is an honor to coach athletes that work as hard as Jacque day in and day out,” Smith said, “It has been a real privilege to coach Jacque and have her part of our program. She has done a nice job leading by example every year.”

Through the first 19 matches of the 2017-18 season, Luth is on pass to surpass her kills, digs and points from last year. The offseason has proved successful for her as she continues to make improvements to her game.

“I have worked on increasing my repertoire of shots so I have a variety of options to terminate,” Luth said, “I have also improved my mental game, meaning I have confidence that I can score, but I’m also aware that mistakes will happen and I can move on to the next ball without letting it affect me negatively.”

Mentality is something that is important in most sports, but Smith has pushed Luth and the entire team to continuously push themselves to be better.

“As a program we have focused on going ‘all out, all the time,’ meaning we will compete against every team we play with the mentality of expecting to win,” Luth said.

Going into a match expecting to win can change the entire outcome of the game, simply because of mentality.

“She (Jacque) has a relentless work ethic and has worked extremely hard and tirelessly in growing her game,” Smith said, “She is a special athlete and person.”

With only half of her senior season remaining, Luth is thrilled with the team and how her hard work has paid off.

“It’s a good feeling to reach the milestone toward the end of my career after working to improve my game to help bring the team to success,” Luth said.

The Storm will host Waldorf on Oct. 18 and IIAC rival Luther College on Oct. 20.