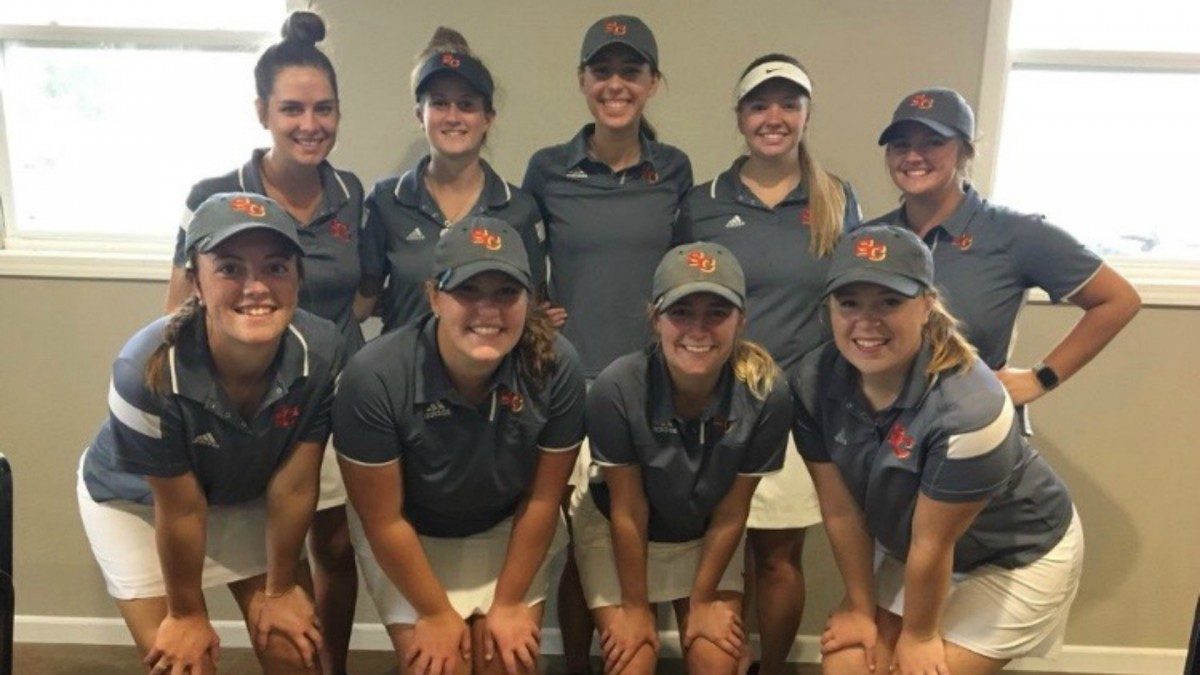 INDIANOLA, Iowa — The Simpson women’s golf team sits in fourth place halfway through their Iowa Conference Championship, which started Sept. 29-30 and will be completed this weekend.

The Storm carded a 338 on Friday, Sept. 29, and improved by four strokes Saturday, Sept. 30, carding a 334. That gives the team a combined score of 672, placing them 21 strokes behind Luther in third place, and four strokes ahead of Wartburg in fifth.

“I couldn’t be more pleased,” head coach Larry Shoop said. “With the people that we have, we are where we should be. That doesn’t mean we can’t put together a stellar performance this weekend and challenge the number three spot. But we’re playing well.”

Junior Lydia Martin led the team with a combined score of 159, currently good enough for fifth in the individual standings. She is nine strokes behind the lead and echoed her coach’s thoughts.

“The first round of conference went very well for our team,” Martin said. “We all have a very good mindset about how we want to represent our team and Simpson College. We will carry those mindsets into this weekend to post even lower scores that we know we are capable of.”

Five strokes behind Martin sits sophomore Hannah Gordon, who is tied for 12th. Sophomore Haley Booton carded a 171, senior Courtney Mabeus carded a 178 and junior Kelsa Berkland carded a 183 to round out the weekend.

Two years ago Simpson finished sixth in the IIAC tournament, and last year the team finished fifth. Shoop said the team is focused on a higher finish this year.

“Each of those previous years we were in a higher position on the third day then what we finished on the fourth,” Shoop said. “We’ve really been focused on finishing strong, making the end of every round count and the end of every day so that we can keep elevating the program.”

The IIAC tournament’s second weekend will be played at the Indianola Country Club this weekend. This doesn’t necessarily give the Storm a home course advantage, because Shoop said it will be just as difficult as any other course for his team.

“This will be a challenge for us on our home course because it’s a difficult track and we’ve played it a fair amount,” Shoop said. “Course management is a key to playing at the country club well.”

Shoop was pleased with the start of the tournament, but said the team can improve in order to have the results they want.

“Putting is just something that we can continuously improve on,” Shoop said. “If we can one or two-putt each green, then we’re going to have a stellar day.”

The final two days of the tournament, Oct. 6-7, will end the fall season. Highlights for the team include placing second at their home meet and third at the Graceland Invitational.

“In terms of progression, I’m happy,” Shoop said. “They’re just doing a tremendous job. Their work ethic is very strong. They realized what they need to do and they’re getting it done.”