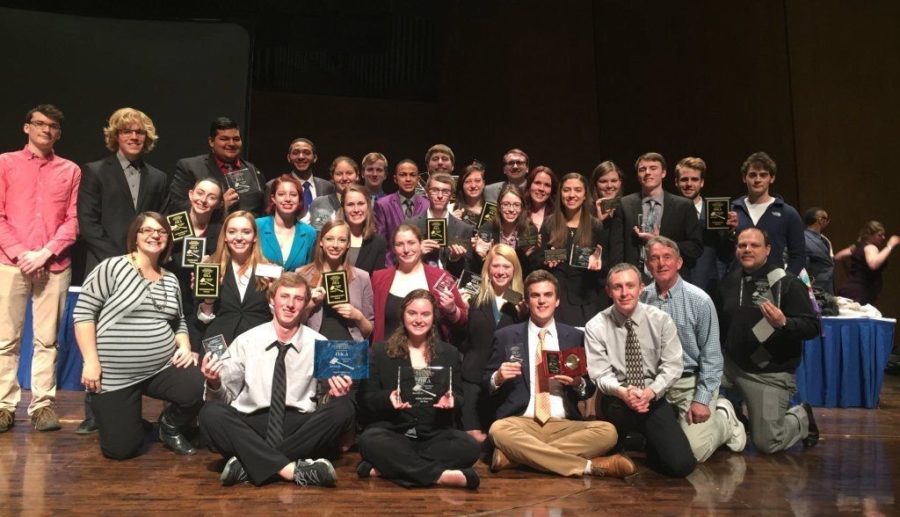 It’s no debate that Simpson College forensics has the best squad in the nation.

The debate team narrowly edged out Colorado Christian by 1.5 points to take their first-place finish in debate sweepstakes at Pi Kappa Delta Nationals in Lexington, Kentucky.

Director of Simpson Speech and Debate Spencer Waugh said this is the moment they’ve all been waiting for.

“We had never been better prepared for debate nationals before,” he said. “We had strength across four of the six debate divisions, and all 19 of our debate entries performed well.”

Waugh, who’s on the PKD executive council, had the opportunity to present the championship trophy to his team.

“We knew we had done well enough to be in the top five, so when we didn’t get second, the team knew we had won,” Waugh said. “Our preliminary rounds were so good, seven out of our eight team and individual debate entries cleared to outrounds, which is unheard of. That was more than any other school”

Eighty-six schools from across the country competed in the tournament, with 14 speech events and six debate events offered.

The successful performance, Waugh said, was almost hindered due to last-minute drop outs hours before departing because of influenza.

“A few illnesses made the climb a little steeper,” Waugh said.” Our two last-minute replacements learned topics quickly and did extensive preparation work on the bus.”

One of those students who rose to the occasion was sophomore Tristan Carman, who ended up as a quarterfinalist in public forum debate with partner Paul Safford.

Freshman Pierce Carey’s partner also fell ill hours before the tournament. Carey and his partner, Danielle Bates, ended up with a 3-3 record and contributed to the team’s overall points.

“My expectations were pretty high,” Carey said. “Unfortunately, (my partner) got sick and was unable to go, but I was happy with Danielle’s and my performance. As a team, we did exceptionally well.”

Despite the minor setback, the debate team accomplished their goal of becoming a national champion.

When Waugh came to Simpson in 2011, the program only had four students.

“I’m incredibly proud of their hard work, and I am thrilled that it paid off,” Waugh said. “I think creating a culture where preparation and practice are a part of (success). The thing I’m most proud of is that every member of the team contributed, with more focus on how we did as team, rather than individual performances.”

“Next year, I hope to bring home the title in debate again and hopefully get our speech team one as well,” Carey said.

Waugh said the incoming freshman class will help achieve that goal, with only four seniors leaving this year.

Octofinalist: Alex Geren and Will Seiler

Sydney Samples and Emily Schwickerath defeated Kansas Wesleyan in octofinals. They defeated Belmont in quarterfinals. They lost to Grove City College in semifinals to place fifth in the nation.