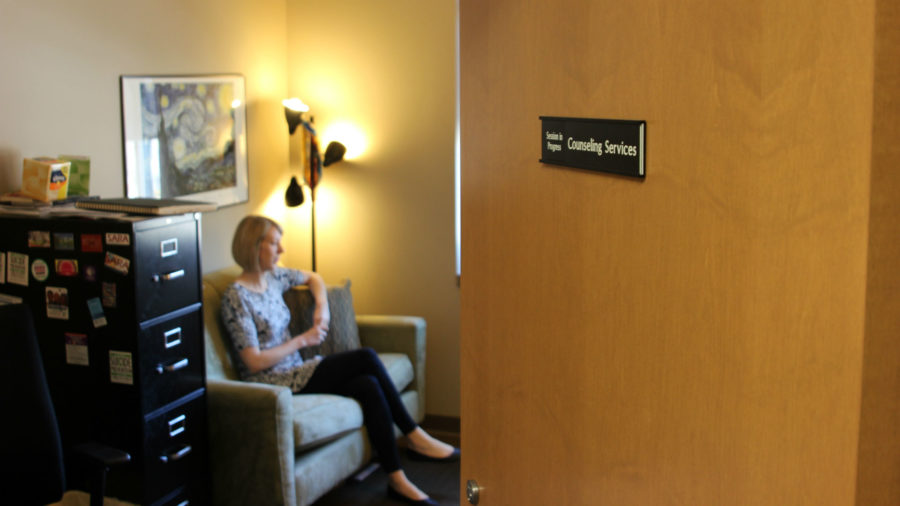 Mental illness has plagued college communities for years, but recent data from the American College Health Association indicates these disorders are a growing epidemic among students.

According to the 2015 National Collegiate Health Assessment, 32.5 percent of undergraduate students reported that stress had a continuous negative impact on their academic performance.

“Our biology doesn’t change fast enough to account for the rate of increase that we’re seeing,” said Don Evans, chair of Psychology Department. “Whatever is going on, we’re pretty sure it’s social, not biological.”

Anxiety is the most commonly diagnosed form of mental illness in the United States, accounting for nearly 20 percent of the adult population, according to the Anxiety and Depression Association of America.

Due to the nature of this disorder, many cases go undiagnosed.

The ADAA estimates only one-third of the suffering population seeks treatment.

“I think, in general, people wait until things are too painful before they seek help,” Evans said. “I don’t think college students are any different. I think that often we have services available that people don’t access or seek out.”

Counseling Services hosts mental health screening days throughout the academic year to assist students in self-evaluation and encourage them to make appointments.

“We never turn anyone away here,” said Ellie Olson, director of Counseling Services. “It’s normal to struggle, but if it’s getting in the way of having the type of college experience that you want, whether that’s academically or socially, that’s a time to come in and seek help.”

During a student’s first visit with a counselor, one can expect to prepare paperwork that fills counselors in on the student’s background and mental health history. The student would then meet with one of four counselors in a 50-minute session to discuss anything that may be related to problems that they’re having.

Depending on the student’s needs in combination with suggestions from the counselor, follow-up appointments may be scheduled to discuss how to best provide further support.

“(Students) can expect to talk to someone who is here to help them figure out what is best for them, regardless of everyone and everything else in their lives,” Olson said. “We are not here to tell you what to do but to help you figure out what you want and to give you the tools and resources that you need to make that happen.”

In addition to providing direct assistance, Counseling Services also works to collect quantitative data from clients. The data is used to analyze the reasons that students make appointments so that steps can be taken to inhibit future occurrences.

“Prevention is a much better plan than therapy,” Evans said. “If you can do an intervention that prevents a whole lot of unhappiness from ever occurring to begin with, then you’re way ahead of trying to help people after they’ve already experienced some kind of disaster.”

Counselors contribute information gathered from clients to an annual study conducted by the Center for Collegiate Mental Health. The study analyzes what issues college students are dealing with, the rates at which those issues are being experienced and whether the rates of occurrence have increased or decreased between various years.

“The top four concerns every year are anxiety, stress, depression and relationships,” Olson said. “What’s important to remember about these things is that they are very interconnected. We don’t often struggle with just one thing.”

Student Health is only available for a set number of hours each day, and students have responded to the need to create additional support for each other to account for times when counseling isn’t immediately available.

Walker Mask has struggled with social anxiety and depression since high school, but it wasn’t until his third semester of college that he acknowledged his disorder.

“In our society the expectations for each generation are higher than the last,” Mask said. “You get to the point where you fear of any form of failure, which could be represented by any form of weakness. Going to a counselor for help is something that would demonstrate that weakness and so you don’t. You try to power through it, miserably. And some people don’t make it to the other side.”

Before Mask knew about mental illnesses he felt alone and less encouraged discussing his mental health with peers.

“Because there are so many people having these issues, I think it is steadily getting better,” Mask said. “A benefit of a bunch of millennials realizing they’re all screwed up at the same time is that you have people helping each other.”

The goal of Simpson’s support and advocacy group SELF, which is an acronym for strong, excellent, loving and fearless, is to support other students.

“We’re around our peers 24/7, while faculty is only here for a 9 to 5 day,” said Lauren Myers, president of SELF. “That makes it difficult for them to actually know what’s going on because they’re not with us early in the morning or late at night when we may notice significant changes in our mental health.”

In addition to peer support, SELF also works to spread awareness to other students, providing education regarding issues like anxiety.

“It’s an epidemic and it’s OK to acknowledge it and help your friends and classmates,” Myers said. “(Advocacy) is a good thing because people won’t know what they’re going through, let alone their friends, until there’s more awareness.”