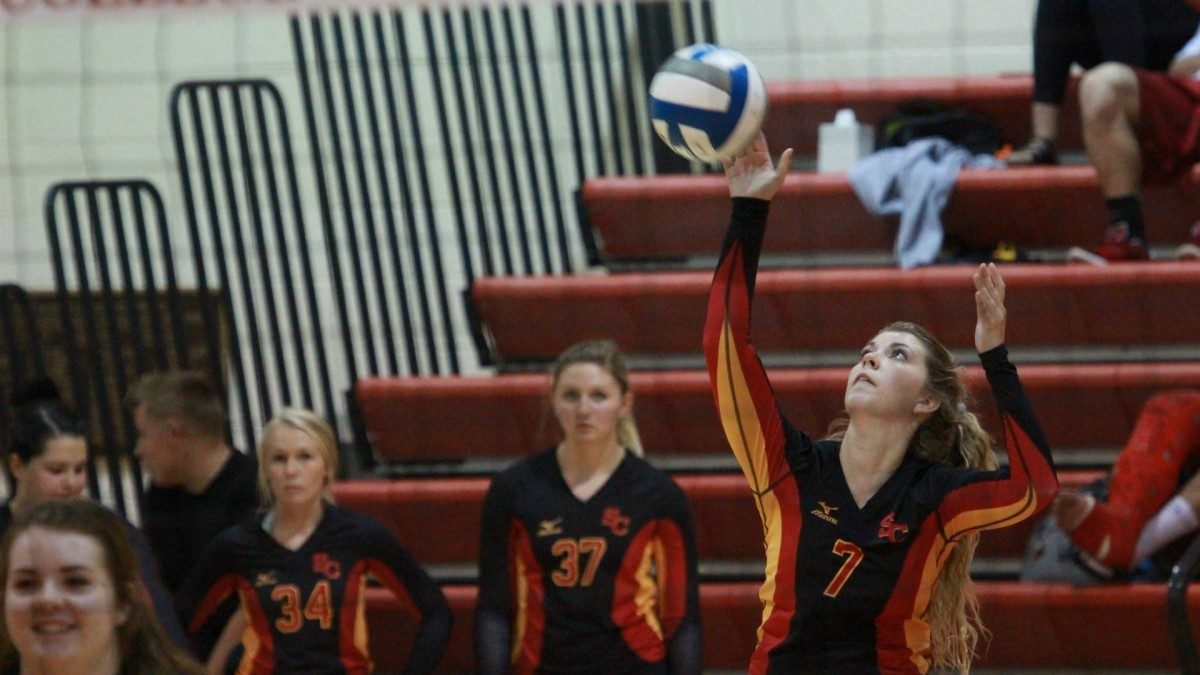 INDIANOLA, Iowa — Twelve games into the 2017 season, the Simpson volleyball team sits at an even 6-6 record. The Storm just came off a weekend at Ripon, Wisconsin, where they won two matches and lost one.

As the Storm near the halfway point in their season, head coach Lana Smith likes what she sees in her team.

“We have a lot going on that’s positive and we are getting much better every time we hit the floor,” Smith said. “We have a really nice team this year.”

The Storm was 11-16 overall and 1-7 in conference matches last season with many of the same players who are on the 2017 roster. Smith says earning experience is an important key to winning more games this year.

“Our sophomore class played a lot as freshman last year and they’ve all had a year of experience under their belt, so that has really helped,” Smith said. “We still have quite a few new freshman and sophomores in our lineup, so we’re kind of working through that, but we’ve been competitive and getting better every match.”

Competition has been a theme for this team as Smith pointed out there’s a large group of underclassmen all fighting for playing time.

“Our team has been very competitive, day in and day out,” Smith said. “We’ve competed hard in practice and we definitely have more depth this year. We’re vying for positions within our team so the competition there is strong.”

The competitive nature of the team matches up with the goals that Smith has set for them as a unit.

“Our goals for this season are to expect to win, which kind of involves the confidence to say we can,” Smith said. “We can beat people, even as young as we are. We can play with anyone and we need to expect to win and make it happen.”

Although much of the team is young, the Storm is bringing back a couple seniors. One of those returners is honorable mention all-conference player Jacque Luth. Luth leads the team with 137 kills and is 44 away from becoming the 16th player in Simpson history to earn 1,000 career kills. She echoed what her coach said.

“I’m happy with the versatility of our players and everyone’s willingness to play their role for the team,” Luth said. “This allows us to expand our offensive options and put our best team out against every opponent.”
Both Luth and Smith are happy with where the team is at right now, but also both think there is room to grow.

“We’re going to have to improve on consistency,” Smith said. “A lot of times that might be our inexperience that kind of comes up and grabs us every now and then.”

The Storm have already won a conference match against Buena Vista this season. Their next match is at Dubuque Sept. 29 at 7:30 p.m.