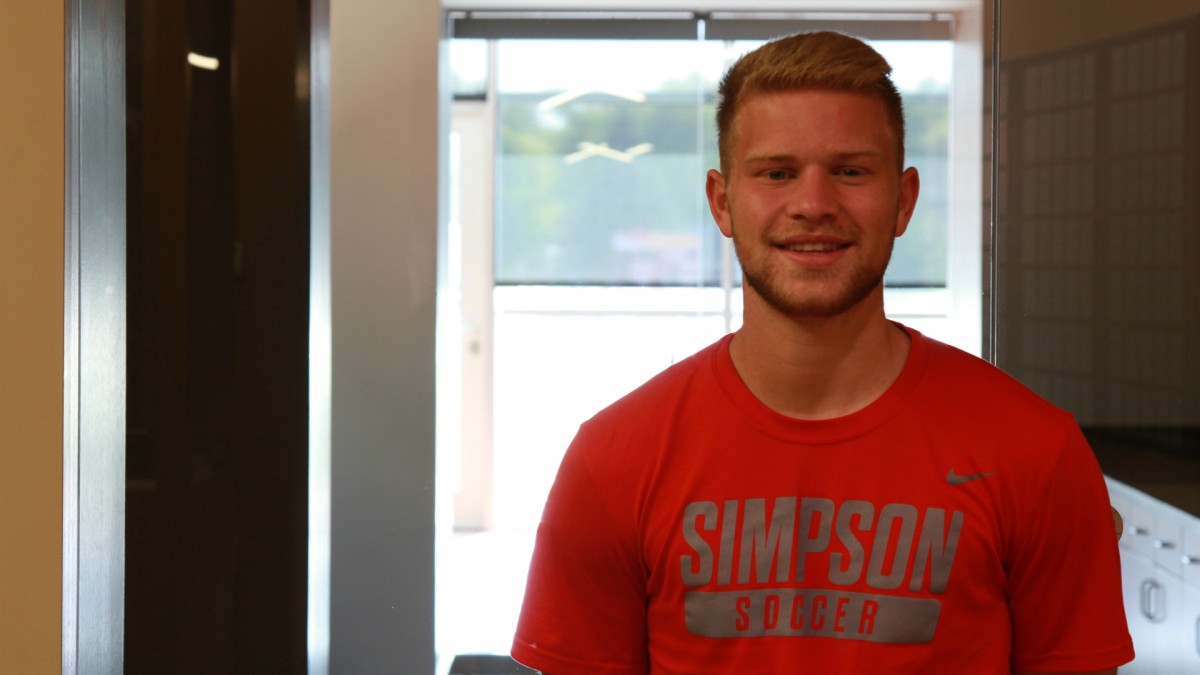 by Gunnar Davis, Special to The Simpsonian

INDIANOLA, Iowa — After a comeback win against Carleton, Simpson men’s soccer team improved to a perfect 3-0 on the season. Although the accomplishment is due to many moving parts, much of the team’s early success can be attributed to sophomore midfielder Tanner Alderson.

In the first two games of the season, Alderson scored three goals and earned himself a selection as the Offensive Player of the Week by the Iowa Intercollegiate Athletic Conference.

“It feels really good,” Alderson said. “I worked really hard in the off season, so it was nice to see the hard work pay off.”

Alderson’s improvements are showing on the field and in the books. He’s already had three goals in his first three games. That’s one-third of how many he had a season ago.

“I was trying to be on the ball as much as possible,” Alderson said. “I worked a lot on finishing since that was probably my weakest point last year. I had nine goals, but a lot of guys on the team gave me a lot of crap for missing some of the ones I should have had.”

Alderson also credited his success to working ball-skill drills and switching to the striker position late in the season last year, a position that gives him more freedom to try to attack the goal.

“My goal is to have the most goals on the team,” Alderson said. “I’m playing behind (senior) Garrett Pochop. He was the leading goal scorer in the conference last year, so that’s a pretty big goal, since I’m playing behind him. If I continue to play the way I’m playing, I think I could get there.”

Pochop also plays midfielder for the Storm. Last season, he was named IIAC Offensive MVP, Second-Team All-Region and set a school-record with 22 goals. Alderson said Pochop has given him some tips and lessons.

“If you want to be the best, you have to learn from the best,” Alderson said.

Both players said the two have developed a strong friendship off the field, which has helped their chemistry on it. Pochop said he has a lot of respect for how hard Alderson works, and he deserves the credit he’s received.

“Last year he didn’t see as much time on the field as I’m sure he would’ve liked,” Pochop said. “But he was one of the hungriest players to improve, and near halfway through the season, he found his way into the starting lineup. He has started this season just where he left off and is a big reason why our offense is having the success it is.”

“While Tanner is experiencing a lot of success right now, he’d be the first person to tell you that he can improve his game.” Isaacson said. “Tanner has the athleticism and skill set to dominate at this level, but he is nowhere near his ceiling. It will be fun to watch him evolve as a player if he continues building on some of the good habits he’s developed.”

Isaacson and Alderson are both hoping their early success will continue into the rest of the season. The goal for the team is to be the champions in the IIAC and to compete in the NCAA tournament.

While the team’s goals are lofty — men’s soccer hasn’t won the IIAC since 2000 — Alderson believes they can accomplish it. If the first three games are any indicator for how the season will play out, the future is bright for Storm soccer.