5 nonsensical ways to fill out your bracket 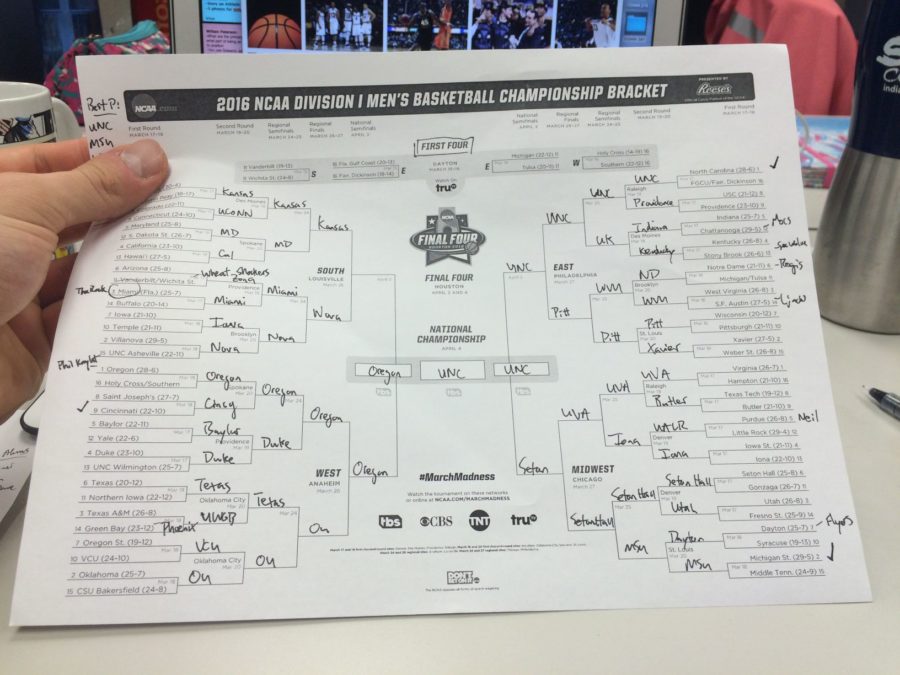 If madness is reserved for March basketball, imagine how ludicrous this year’s NCAA Men’s Basketball Tournament will be after the regular season.

Seventy-four times, top-10 teams lost this year, the most since the Associated Press started the Top 25 poll in 1948. No. 1 teams lost seven games, and it seemed like the Big 12 and Big 10 played a game of hot potato with the top spot in the conference.

That being said, using reason to select your 2016 bracket seems a bit foolish. So why not match the crazy basketball season with your own outlandish selections using these strategies.

Beware for the one-month diehard basketball fans, too.

Every casual group that watches a major sporting event has the person who reduces their pick to win down to whoever has the most powerful, cunning or cool mascot. If that’s your criteria, here’s who should win. From Mocs, to Governors, Seawolves and Lumberjacks, the field is pretty diverse this year. The selection process is subjective, but here’s the final four for this category.

Perfect microcosm of the state of Kansas…and a frightening mascot.

The last thing I think of when I envision Green Bay is a Phoenix, but it is an encouraging mythological figure when it’s -30 degrees below in January.

Apparently this refers to a mockingbird, not to be confused for moccasins that are taking the casual clothing world by storm.

Can’t think of a better name to pay homage to the Wright Brothers or high-flying basketball.

Famous criminals, athletes, innovators, actors and politicians all made the field for this category, but I don’t think there is much arguing about these four.

The founder of Nike. My wardrobe would be reduced to burlap if it weren’t for Phil.

“Is that your final answer?”

“One small step for man, one giant leap for mankind.”

This section is devoted to the days when 18-year-olds or “one and dones” didn’t dominate the Association.

Only NBA player to ever score triple digits in a game. One-hundy.

You know you’ve made it when you’re referred to by your first name. He’s known by one letter: Big O.

The man who made March “mad.” Plus, people don’t even know his real name is Earvin.

When all else fails. Either this or ask your goldfish.

Let’s face it, we live in a football crazed nation. This is for the fans who are sports fans for one day a week between September and February.

At one point and time they were the mecca of college football. And football players who majored in illegal activities.

Kansas football doesn’t get new jerseys every weekend for a reason. Wait, Kansas has football?

Their head coach has sleepovers with his recruits and plays flag football at instructional camps. Who wouldn’t want to play here?

Let’s just not have them play an SEC school in a bowl game…other than that they’re good!

These are the schools that instill fear in parents of students all across the nation. Will my child actually study, or will they major in surfing, beach volleyball and suntans?

According to an article in the USA Today, “To live comfortably in Hawaii, you’d need a salary of over $122,000.” This doesn’t happen if you live in Brookings, South Dakota. Sorry South Dakota State University.

This region was pretty weak in this category. Cedar Falls, Iowa, Green Bay and Norman, Oklahoma were all competitors. The Seahawks win by default.

The graduation rate for FGCU students in 2013 was 27 percent…this isn’t Harvard folks.

The seventh sunniest city in the US and second sunniest in California at 79 percent of days being sunny according to “Nerdwallet.” Philadelphia is No. 125, by the way.