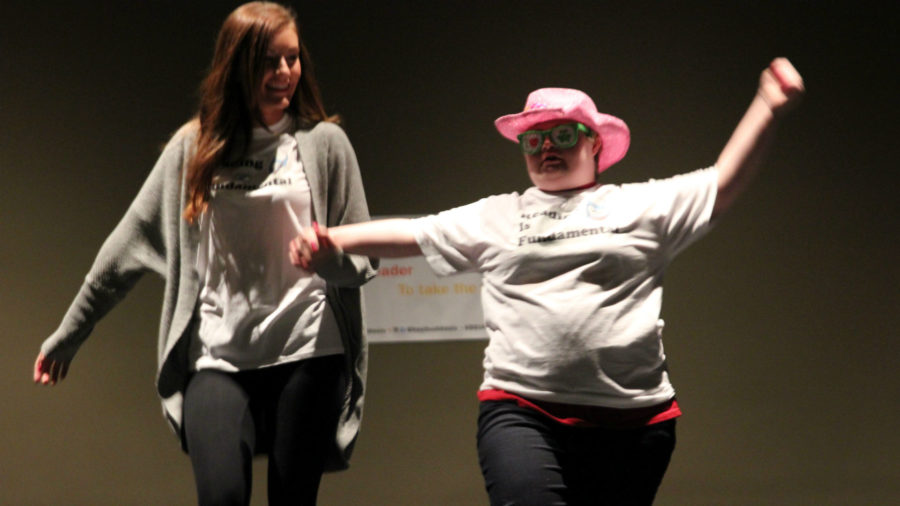 The second annual Best Buddies Fashion Show at Simpson College aimed to “Spread the Word to End the Word.”

The Best Buddies Fashion Show debuted last year after the president of Simpson’s chapter, Molly McCreary, was inspired by similar events going on in other chapters around the country.

“We go to a leadership conference every summer, and you meet with other chapters of Best Buddies all over the country and all over the world,” McCreary said. “Other chapters had done this and that’s where I got the idea.”

Other college campuses used the fashion show as a fundraiser event, but this year’s fashion show was focused on awareness.

“Since this is only our second year, we’re just doing awareness and having fun and showing people that our buddies are just like us,” said sophomore Savannah Calaway, vice president of Best Buddies. “They understand what the R-word is, and they get hurt by it when they hear it.”

Fraternities, sororities and other extracurricular organizations had an opportunity to participate in the event. Sponsors made posters advertising the fashion show, helped with hair and makeup and provided outfits for many of the participants.

Sponsors also resemble an important part of the Best Buddies mission, which is building relationships within a college community.

“Oftentimes the only people that (people with special needs) interact with are people that they’re related to, those who are paid to be there or other people with special needs,” McCreary said. “The point of this program as a whole is get them out in the community and involved with people who don’t have disabilities and create friendship. We’re more alike than different.”

“More Alike Than Different” is the slogan for Simpson’s Best Buddies this year and is featured on their T-shirts. Members of Simpson College Best Buddies include students that are pursuing a wide range of majors and are involved in many other student organizations.

“For a long time Best Buddies was just education majors, specifically special ed,” Calaway said. “We purposefully reach out to other groups because of this, but the organization does the rest because of what it is.”

Nearly 50 students attended the event and many family members and friends came to show their support as well. Cheers and shouts of encouragement could be heard from the audience as members displayed their various routines.

“Our buddies feel like they are a part of Simpson,” Calaway said. “They really like having other communities to be a part of. It shows them that they’re the same.”

This year’s fashion show was dedicated to Sommor Dales, who passed away of a heart attack in early November. Dales was an active member of Simpson College Best Buddies.